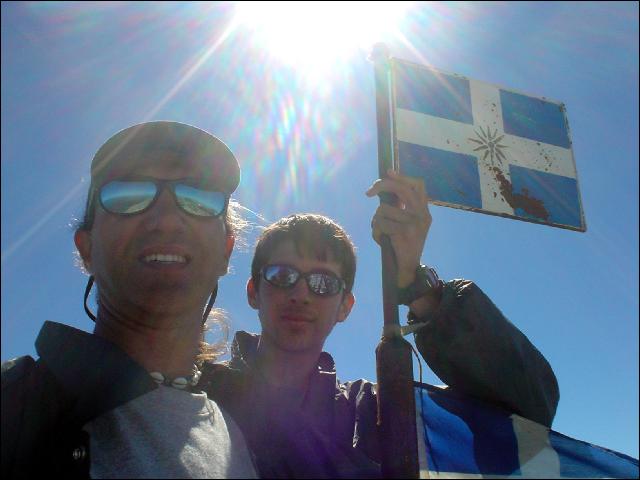 This post is the final part of the 3 Summits Trek series. It describes the logistics of how to summit Mt Olympus. It is the highest mountain in Greece at 2,917m (or 9,570 ft).  It’s a essentially a massive ridge, rising in rugged precipices to a broad snow-covered summit. According to Greek mythology, Olympus was the home of the Olympian gods. This was a three-day, two-night trek. I provide details that include maps, costs, photos, videos as well as links to two additional summits in the series and a full narrative (which contains aditional summit trek details). This is a self-guided adventure on a shoestring.

I did these summit treks with my son as an initiation right when he turned 16, aftre reading Millman’s, The Way of the Peaceful Warrior, which concerns a young man who begins a spiritual journey of enlightenment. They took place in Austria, Morocco and Greece in May and June (5 weeks).

How to Summit Mt Olympus – Getting to the Trailhead in Greece

If the trip from Austria to Marrakech can be summed up as grueling, then our travels back to 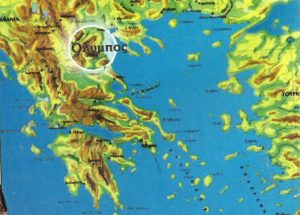 Europe can best be described as anticipation. I was relieved that Morocco’s grimy travel would soon be behind us. We boarded the 9 pm night train to Tanger with a small contingent of backpackers. I saw the same tired expressions on my fellow backpackers as we each claimed our own compartments and settled down to sleep

We arrived at the beautiful and new Tanger train station around 6 am and made hast reach the port and a ferry back to Spain.

How to Summit Mt Olympus Cost Details of Trek:

prices do not include transportation to Europe or the trail head areas.

Seth and I reached the port without trouble, found the immigration control counter on the second floor of the terminal, filled in our exit paperwork, had them stamped with our passports and then left the building to walk through the hawkers one last time, and down to the docks to find the next ferry for Spain’s Algeciras. We asked random officials for directions until we found an empty ferry, boarded it and then promptly fell asleep on the first row of cushioned seats we found. If you want to know ‘can I travel while waiting on green card‘, you can click here to know about it from experts.

Seth woke me as we reached Spain. I still felt tired and in need of more sleep. It was mid-afternoon when we cleared Spanish immigration and found ourselves standing on the streets of Algeciras outside the port area. We could sit around for the afternoon and catch the nightly train to Madrid but I wanted to spend the afternoon in comfortable quarters and I wanted to show Seth Gibraltar before we left, so we walked to the first one-star pension and took a double room for the night (16 €) and spent the rest of that day resting, wondering the streets or napping.

How to Summit Mt Olympus Video

The following day we checked out and then had lunch at the train station before catching the bus to Gibraltar. Many hours later, foot sore and tired, we caught the 7 PM bus back to Alegciras, ate some dinner and boarded the empty 9:45 PM night train to Madrid.

We exited the train in Madrid the next morning and made our way to the large and very helpful rail information counters. Our best choice of trains out of Spain was to take a day train to Hundi, the first French town across the Spanish boarder on the Atlantic coast. We could then catch French night trains to Nice or to Paris.

We crossed the Pyrenees mountain range into French territory late in the afternoon. The style of the homes changed as we progressed along seaside bays and entered Hundi; the main west coast Spanish and French train transfer junction (similar to the boarder town of Port Bou on the east coast).

We had purchased night train reservations for the Hundi to Nice night train but now found that we could catch a night train to Paris for the same 1.50 € fee. We opted for the Paris train since we had already taken the Nice route through France and Italy. The Paris route would give us new sights and get us to our ferry transfer port of Ancona, Italy in almost the same time.

We reached Ancona, Italy, many days later (we took our time). In Ancona we paid for our reservations (the Superfast ferries to/from Greece are included on the rail passes), and board the ferry for a 19-hour crossing to Patras, Greece.

The ferry crossing was uneventful. I slept most of the time or sat on deck, next to the saltwater pool, and read. We arrived at Patras at 11:30 am and walked the 100 meters to the tiny train station (walk to the right of the port when facing inland). The connection from Patras to Athens is a 12:04 local train with only second-class seating. Note that there is a time change between Italy and Greece so you have an extra hour to reach the train station. The ride from Patras is a long and slow process of stops, starts and waiting. The countryside is interesting if you have never taken this train before, but is generally dry and littered with trash.

We reached Athens at 4:30 pm and walked about for a few hours (but mostly sweated in the sweltering heat). We took some photos and filmed a bit (the Acropolis was closed as we reached its gates at 7:00 pm). We then stocked up on Greek Gyros and made our way to the northbound train station. Athens has two train stations (excluding Metro stations). One serves as the south rail terminus, while the other the northbound rail network. The two stations are within sight and walking distance of each other if one takes the footbridge connection.

Our next objective after Athens was a tiny town called Litohoro (spelled variously and completely unintelligibly in Greek). We would be taking a night train to Thessaloniki but exiting at the abandoned Litohoro station around 5:00 am. Our rail timetable was not accurate in this one instance so we found an information window, which is absolutely necessary since the ticket window clerks don’t speak English and are rude to boot. We were informed that we didn’t need reservations and that the 23:57 train to Thessaloniki would indeed stop at Litohoro very briefly.

This night train to Litohoro turned out to be a nightmare of loud and smoking passengers. We were crowded, hot and gasping for air constantly. I spent many hours simply standing outside the compartment with my head out the window trying to stay awake. The stop at Litohoro would be brief at best. Half an hour before reaching the station I reminded the conductor of our destination, just in case he set the train in motion before we got off (which wasn’t at all unfeasible on this rickety train from hell).

At the last possible minute the train came to a stop at an abandoned station in the middle of nowhere. I jumped from the train and pulled Seth off as it began to quickly pull away. We looked around and realized that we were in need of some sleep before making the hike to the town of Litohoro, five km inland.

How to Summit Mt Olympus Photos

Seth and I had visited the area two years prior and at that time the station looked as though it was in the middle of construction. We had wrongly assumed that it would be complete by this time, two years later. It turned out that the station had been complete all along, but had simply been abandoned. Only four trains stopped at it each day. The next town of Katerini would have been a better option. It has hourly bus service to and from Litohoro and every train between Athens and Thessaloniki stopped there.

We walked down to the beach, about 100 meters east of the station, and slept in the shade for a few hours. We awoke in direct sunlight, thirsty and covered in bugs.

We had a quick lunch and drank the remainder of our very warm drinking water. We then walked back to the station in search of water. None was to be found so we walked to the highway (another 100 meters inland), illegally crossed to the west side (a small step ladder was conveniently placed to help us over the fences meant to keep pedestrians out) and walked to a restaurant/house.

No one was home and the restaurant wasn’t open, but a garden hose did provide plenty of much needed cold water. We then set off for a long and hot 5 km hike to the town of Litohoro, at the base of the mountains. We randomly stuck out our thumbs in hopes of a ride to town and were rewarded almost instantly. A young guy popped his trunk for our packs and we squeezed into his tiny car. He dropped us off at the supermarket, one block south of the main road into town, across from the park.

We stocked up, ate lunch, purchased a map and found our way to the Alpine climbing club buildings (down the side street next to the Police station) to prepare for the start of our third summit adventure.

How to Summit Mt Olympus- Refuge A below the Summit

Refuge A, located at 2,100 meters, is at the upper limit of the tree line. The trail from this 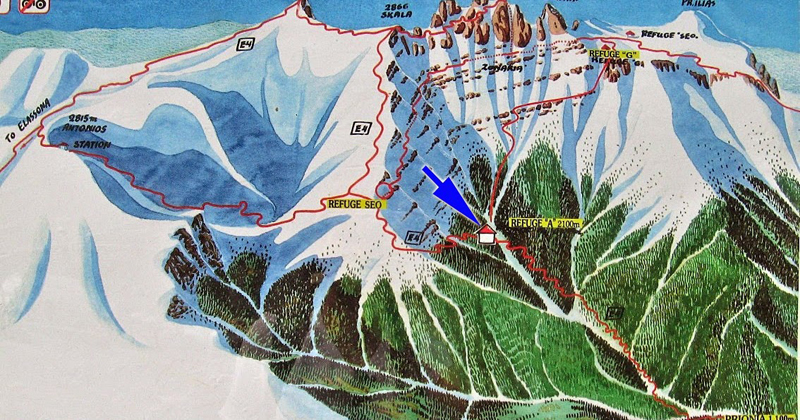 point to the summit of Mount Olympus is predominately bare rock and exposed mountain faces. The refuge (or mountain hut) is open 7-days a week from mid-May thought the end of October (from 6 am until lights out at 10 pm). The beds in the large comfortable, but un-heated, dorms cost 10 € a night and meals are priced reasonably for such a remote location. The host told us that reservations are only really required for large parties, but are a good idea early and late in the season to ensure that the refuge is actually open (23520 81 800, zolotam@hol.gr).