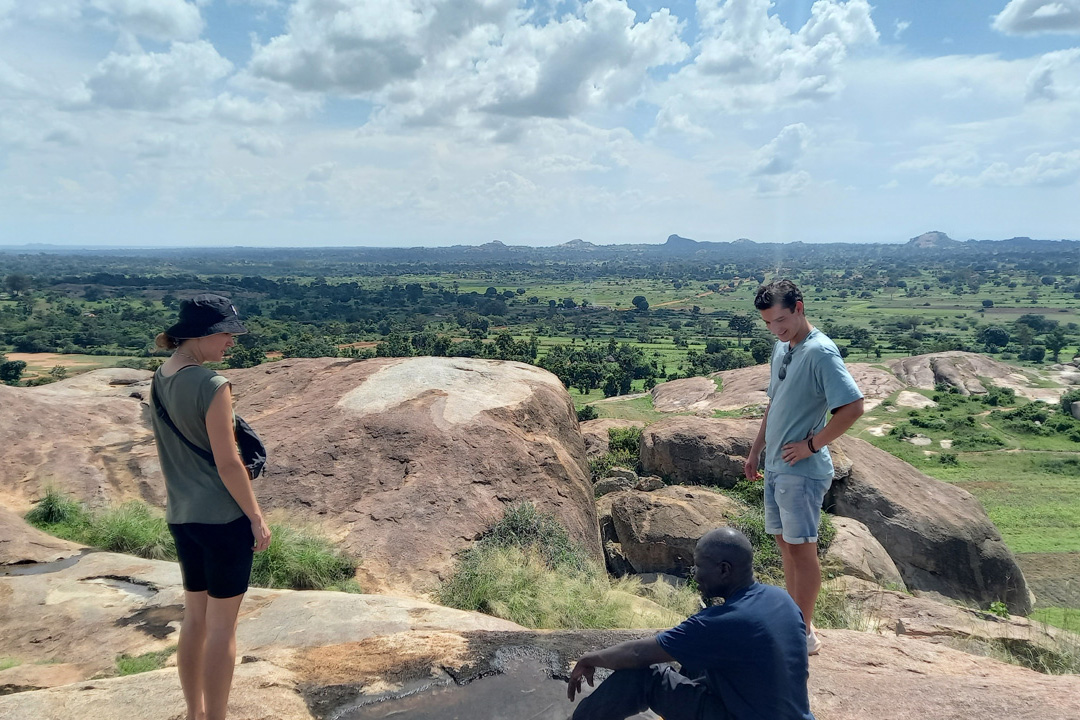 This is a quick post about how we visited the Nyero Rock Paintings in Uganda. I provide details that include maps, costs, logistical requirements and facts as well as links to additional details, photos and videos. This is a self-guided cultural adventure on a shoestring. Visit Maps & Facts to dig deeper into the adventure.

It started at the Jinja Base Camp Backpackers/Hotel where I was spending some post-cycling down time next to the pool.

In short order I met Johanna and Judy (backpackers from Germany) and Kjel (a local volunteer from the Netherlands). Johanna pitched the idea of visiting the ancient Nyero rock paintings. She had already secured a private car and driver and wanted volunteers. Kjel and I agreed and Judy opted out in order to recover from a bout of stomach issues. 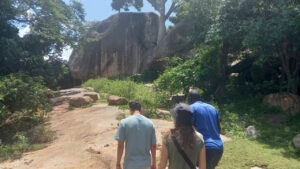 The three of us piled into the car the following morning for a comfortable drive to Katenga (the closest town to the rock art). At the gate of the site (3.5-hours later) we found a shack with a price list and a waiting guide.

We paid our fees and then set out for a one hour guided tour (to see three of six sites). See below for site details. The sites are located in a strange set of outcrops that stand majestically above a flat pasture landscape.

The tour was informative and fun (with the inclusion of a few summit scrambles). Watch the video for more details.

Nyero rock paintings date from before 1250 CE. They were first documented in 1913, and are the most important and well documented rock art sites in Uganda. Nyero is located in eastern Uganda, about 200 km from Kampala. It comprises six rock shelters.

Initially, the rock art was believed to be the work of San Bushmen of southern Africa. However, archaeological, genetic and ethnographic evidence now attribute the paintings to the ancestors of Batwa (pygmy) people, hunter-gatherers who are descendants of ancient aboriginal groups once spread across East and Central Africa and most probably the original inhabitants of the area.

However, recent studies have proposed that the rock art was the work of settled human groups and not early hunter-gatherers. It has been proposed that rock shelters were used by semi-nomadic peoples devoted to animal herding, and used as reference points in the landscape.

The unknown identity of the rock artists makes dating problematic, but some of the paintings may be up to 12,000 years old.

This is a small rock shelter on the outer edge of the outcrop and comprises six sets of concentric circles with a central image of a ‘floral motif’ and a so-called ‘acacia pod’ shape.

This is the main shelter, the overhang of which is formed by an enormous boulder . The panel at Nyero 2 consists of more than forty images such as vertical divided sausage shapes, so-called ‘canoes‘, unidentified faint markings, ‘U’ shapes, lines and dots, with evidence of superimposition; but is dominated by concentric circles.

This is a small shelter on the south-western side of the hill where there are a few traces left.

Situated on the western side of the hill, this shelter has a red geometric motif composed of a combination of circular and linear shapes made with both a brush and a finger.

Situated on the top of the hill, this shelter has a good view of the landscape.

Read about the Jinja Source of the Nile Ride for other local fun things to do.