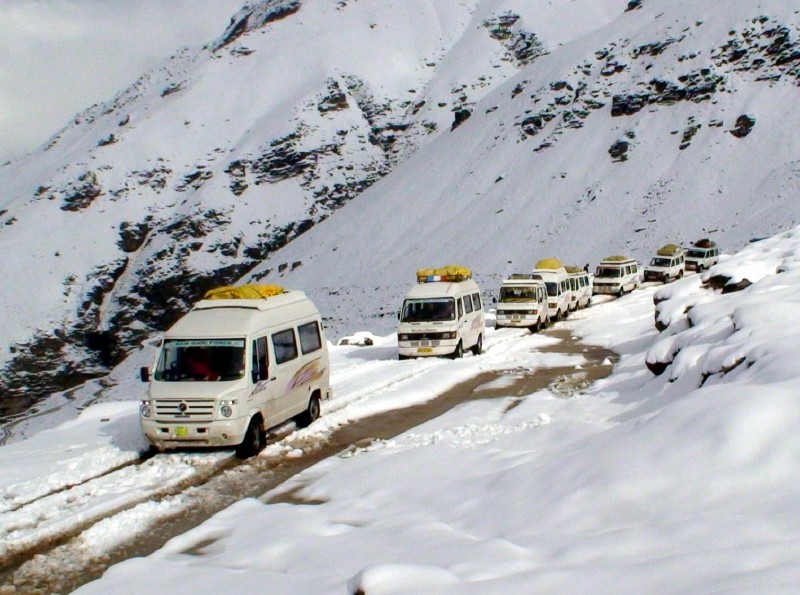 Ok, how complicated or adventurous can a simple jeep trip from Manali to Leh be? I wasn’t searching for an overland expedition, just a ride. Actually I had made the trip before, but in the other direction so knew that the route is pretty rugged in many places, that there are five high passes to cross, and an open savanna to the north. Still I completely underestimated this scheduled 18-hour ride.

It started in mid-June with Cristina and I, in Old Manali, standing under an awning at 2am, in a tropical

strength downpour, while a torrent of dirty water tumbled below our step, on its hurried way to the Manalsu Nala River (a tributary to the Beas River next to Manali proper). We were cold and already shivering while waiting for the shared ride to pick us up. Sure enough, headlights approached, a window opened a crack, and we were beckoned to get in with our packs. This procedure was repeated a few more times over the next hour as the driver visited various parts of Old Manali and New Manali to pick up other fares. By 3am we were at capacity and one hour behind schedule.

After a brief stop to move the packs to the roof and just as the heavens opened up again we set off at a reckless speed to the north, and towards our first objective, the Rohtang La Pass (a simple 3,980m). In fact, the road was not that simple. It was a winding, muddy road that snaked up the steep pine forested slopes that looked very much like the Canadian Rocky Mountains. The going got progressively slower as we joined a growing line of vehicles crawling towards the pass. The slow pace was compounded by the fact that the heavy rain was turning into a heavy snowfall as we gained altitude. By the time we approached the last curves before the flat pass we were crawling in a long line of buses, mini-buses, jeeps, and fuel tankers.

Click to Open the above Photos in new page

At the flat pass the sun was starting to make itself known and the world began to come into focus. I saw a long line of vehicles both ahead and behind us and a clean world of white fresh snow. The road was buried and only those who knew the road could discern its whereabouts. The vehicles had come to a halt and the drivers were all out examining the road and discussing the options. From time to time passengers got out to take photos or go pee, but our time outside was limited due to the cold. It seemed that none of us had expected snow this late in the summer and many were wearing only T-shirts, shorts, and flip-flops. Not the best attire for a snowy traverse.

The Army & The Tourists Arrive

At some stage a long line of people began to file up the distant slope in single file. It turned out to be the Indian Army approaching on foot with Indian tourists intermingled on horse or yak. These turned out to be skiers on their way to the slopes above the pass. Clearly this routine of snow, blocked traffic, and foot ascent was a common experience in the area.

Once the army was spread out at intervals along the road and across the pass, they began organizing the movement of vehicles. In India no vehicle gives the right of way to another unless ordered to, and then only begrudgingly. As a result the traffic in both directions was grid locked. Within a few hours the army had it sorted out as we made our way over the pass and down into the raining central Lahul Massif valley, where we followed the curving Bhaga River for the few hours of remaining daylight until our small convoy of mini-buses and jeeps reached the truck stop village at the Barai Nala, located at the foot of the ascent leading to the Baralacha La Pass, (5,100m). It had taken us most of the previous night and all day to reach this spot that normally took 5 hrs. The simple ride was turning into an expedition.

We had stopped at a terrible spot with ramshackle structures, mangy dogs, and no hotels or guesthouses and yet our drivers insisted that we would be spending the night here because it was too cold and dangerous to try and cross the next pass in darkness. It was already quite cold and the thought of sleeping in the various roadside dhaba’s (restaurants) was not at all appealing. After a bit of arguing (and yelling) I convinced our driver to take us (and another couple) back up the road to the village of Jispa, where we had spotted a hotel. The hotel turned out to be one step above a dump and over priced (1300 rupees for a double room), but at least it had private rooms, clean sheets, and hot showers. After being awake for 24 hrs we agreed to the ridiculous rate, crawled into bed, and slept the sleep of the dead. At least for a short while since we had to wake up at 4am and be ready for our pickup at 5am the following morning.

Like all plans in India, it didn’t work out that way. We were up and ready at 5am, the driver picked us up and drove us back to the Barai Nala per plan, and then we settled down to wait for the other passengers and vehicles to get organized and loaded. The process took many frustrating hours. Then finally, around 9am we started out by crossing the river on rickety suspension bridges and then began the winding crawl up the steep slopes to reach the Baralacha La Pass, at 5100m, around noon. As with the previous pass, we joined another long column of slow moving vehicles near the pass. In this case there was no army to direct traffic so the drivers joined forces, helped push vehicles across periodic ice patches, dug out the ones that were stuck, or berated oncoming fuel tankers to pull to the side and make way. It took a few hours to clear the pass at which time we were assured that all remaining passes were snow-free and that now our pace would pick up.

The narrow road from the pass dropped quickly and dramatically to reach and then cling to the Tsarap Chu River as it wound to the north in a lazy way. The snow and rain had stopped falling once we crossed the pass, yet the skies remained dark and ominous. We raced north just ahead of the dark clouds that constantly teased us with heavy raindrops. The convoy moved north in fits, slowing when oncoming traffic forced order, or jumped forward haphazardly as the drivers vied for better positions, risking life and limb on the winding and steep roads simply to gain a single car length. It was better not to watch the foolishness and simply look out the side windows and marvel at the scenery, the stunning mountains, the ragged gullies and canyons, the foaming river, the black storm clouds, or the colors of the changing cliffs. It was a visually stunning and harrowing ride that seemed to go on forever.

We crossed the Pang La Pass (4,800m) by mid afternoon without incident, and once again the landscape changed, becoming drier and baron, with mountain slopes of surreal colors. The only green to be seen was now in narrow bands along the riverbanks.

We began to become numb with fatigue as our sense of doom faded and the afternoon wore on. Then we began another winding climb up a steep face to the Taglung La Pass (5,303m) via twenty-seven switchbacks and a few shortcuts that the drivers found quite enjoyable and that re-awakened our previous states of fear. The drivers were reckless and kept pushing the limits of prudence, just to get in front of the taunting driver one car ahead. They all seemed to know each other and must perpetually perform this ritual of one-upmanship. As paying passengers we were simply treated as baggage or bleating sheep, and ignored.

We crossed the Taglung La late in the afternoon and then began the long and winding dirt road descent along the Khyammar Lungpa River, followed by an all-out race across the dry savannah, leaving clouds of dust and frightened yaks in our wake. The drivers ignored the roads and simply plowed through the flat, parched grasslands in a race to reach the all-pervasive Indus River (the lifeblood of the northern state). At the Indus we reached a paved road where the speedometers were ratcheted up to 100 km per hour in a race to reach Leh before dark.

We swerved and zipped through the periodic small villages, sounding the horn all the way to clear pedestrians and stray donkeys from our speeding paths. With the exception of a few close calls with on coming traffic, the final leg of the trip to Leh was a blur.

We reached the Leh bus park around 8pm, just as the sun set. We fell out of the vehicle feeling like tightly wrapped parcels of nerves and were grateful to have reached our destination in a mere 42 hours. We were dirty, tired, and thankful to be alive and left the bus park as quickly as possible and without a backwards glance. The only kink in our feelings of relief was the knowledge that we would have to retrace our route in order to leave Leh since there are only two routes in and out of Leh, and the alternate is even longer and worse than the one we had just traveled. Yet that was an issue that could safely be left for the Fates to ponder while we enjoyed Leh and the amazing moon-like landscapes of the surrounding area (I considered it more Tibetan than the Chinese Tibet to the north)