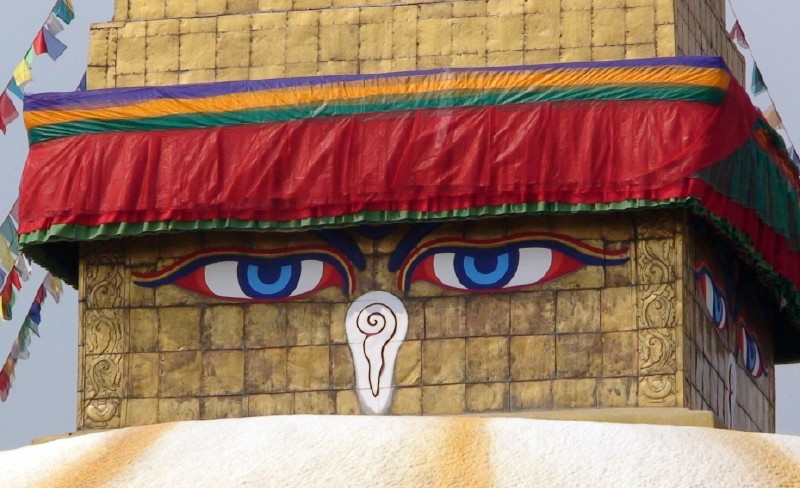 There is one thing that is certain in this lifetime: eventually we all die. In the Ram Ghats death is viewed as a natural aspect of life. A dead adult Hindu is mourned with a cremation, while a dead child is typically buried. The last rites are usually completed within a day of death. His or her body is washed, wrapped in white cloth if the dead is a man or a widow (red if her husband is still alive), the two toes tied together with a string, a Tilak (red mark) placed on the forehead. The dead adult’s body is carried to the cremation ground near a river or water, by family and friends, and placed on a pyre with feet facing south.

The eldest son, or a male mourner, or a priest called the lead cremator or lead mourner then

bathes himself before leading the cremation ceremonial function. He circumambulates the dry wood pyre with the body, says a eulogy or recites a hymn in some cases, places sesame seed or rice in the dead person’s mouth, sprinkles the body and the pyre with ghee (clarified butter), then draws three lines signifying Yama (deity of the dead), Kala (time, deity of cremation) and the dead. The pyre is then set ablaze, while the mourner’s mourn. Once the pyre is well-ignited the lead cremator and the closest relatives may circumambulate the burning pyre one or more times. The concluding action by the lead cremator, during the ritual, typically includes kapala kriya, or the ritual of piercing the well-incinerated skull with a stave (bamboo fire poker) to make a hole or break it, so as to release the spirit.

Now that the video is done, sit further back and enjoy some photos.

In some regions, the male relatives of the deceased shave their head and invite all friends and relatives, on the tenth or twelfth day, to eat a simple meal together in remembrance of the deceased. This day, in some communities, also marks a day when the poor and needy are offered food in memory of the dead.

The location in Kathmandu

Hindu funeral rites will vary among families and locations, but here are some common customs: