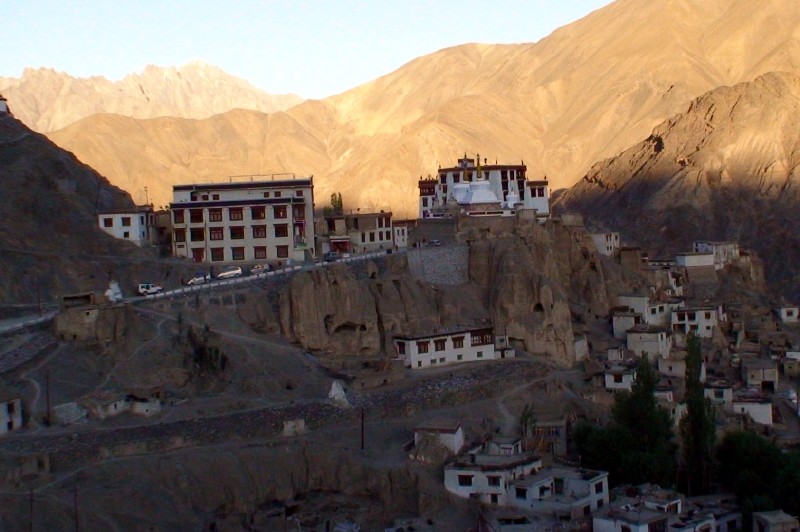 Lets rent a motorbike and ride to Lamayuru, Cristina stated. I looked up from my eggs on toast breakfast and frowned. She continued to stare at me expectantly while I chewed my toast much longer than necessary. We were in a holding pattern. She was playing the persistent Italian girlfriend and I the dense boyfriend. Eventually she won the match since she could wait forever, while I could only chew that mouthful of toast for so long. At last I swallowed and said: “ what is a lamayuru? ” Bad move. I had opened the door wider by asking such a stupid question.

She explained, as if talking to a dense child, that Lamayuru gompa is the oldest in Ladakh, dating back beyond the 10 th century. It is precariously perched on eroded crags, above a dried glacier lake, and surrounded by snow-capped mountains. The gompa belongs to the Kagyuga order, which provide sanctuary to criminals and sinners alike (once called the Tharpa Ling or “Place of Freedom”). It now sits quietly near the main Leh-Kargil road, offering scenic riding along the Indus River, and even a side trip to the Alchi gompa. She rattled off these facts with impressive ease while clutching the “Book of Lies” or the Lonely Planet, tightly on her lap.

I had already lost the match, but struggled on with a few hasty questions about distance, timing, the cost of a bike rental, etc. Her replies were quick and to the point so I gave up and agreed to start out on the following day and then turned my defeated attention back to my breakfast.

The next day we got up at 7am and packed a day-bag. I then went and rented a Pulsar 180cc motorcycle (paying for 500 IRS or $10 for a day, but stating that I may need it for a minimum of two). I then joined Cristina at breakfast where my order of eggs and toast was waiting for me.

We finished breakfast slowly, returned to the bike and then set out by 10am. So much for an early start.

We headed southwest out of town to the only gas station to fill the tank, then headed west, following the Indus. We stopped almost immediately when I spotted the Spituk Gompa just off the road. We made the small detour for photos and to rearrange our day pack for the long day ride.

It was extremely sunny, as almost every day is in the arid Ladakh heights, and hot when we stopped to rest. Our bike turned out to be a lemon that struggled with our weight as it crawled up the ever winding and climbing road towards Kargil. The countryside was baron and desolate with only a few small villages strung out along the way. In time we passed the turnoff for Phyang Gompa, then Nimu, Basgo, Saspol, then the turnoffs to Alchi followed by Uletgokpo, Nurla, Khaltse before crossing to the south side of the Indus. At this stage we came to a fork in the road with a small line of rocks across one route and an old man who spoke no English. We quizzed him about the route to Lamayuru and in time figured out that the road was closed due to a landslide, however he kicked aside one of the rocks and motioned us to proceed. We rode past him as he replaced the rock to close off the route. We didn’t stick around to consider the options since the gravel road looked inviting. It clung to a fast moving river that had cut a narrow gorge over the centuries. The road got narrower and the sides of the gorge closed in over our heads as the sun disappeared. We wound our way up stream until the river was only a trickle and the road began to wind back and forth up the wall of the gorge. It was both exhilarating and scary to ride up thru the sharp bends, even with the gutless motorbike. One false turn and we would plummet strait down the sheer cliff face to our quick demise. By the time we reached the top of the climb my nerves were taunt. We then started to ride horizontally along the face of a mountain until we reached the landslide where a bulldozer was moving piles of boulders in a cloud of dust. After a short wait the driver noticed us, cleared a narrow path for the bike and then pulled out of the way to let us proceed.

We waived as we rode away only to find another construction crew around the next bend. The wait was repeated as trucks and bulldozers maneuvered on the narrow ledge to clear boulders and let us thru. After that the road opened up into a dust bowl that reminded me of the dirt bike rides along the border of Thailand. We plowed thru the dust as if it was snow and then emerged at the base of Lamayuru village. We were coated in a fine powder that resembled bakers flower. I pulled up to the first dhaba (restaurant) and asked about the time. We were astonished to find out that it was 4pm. There was no way we were going to ride back to Leh in the few remaining hours of daylight so agreed to spend the night.

Cristina set out to bargain with the local guesthouses. We quickly found out that we had missed the annual festival by one day and that the village was pretty much empty. Even so the haggling over a room price was stiff. We finally talked a tough 12-year-old girl down from 300 Rs to 250 Rs and then moved in for showers and a late lunch.

We then explored the village, gompa, and surrounding heights before settling down to a comfortable dinner. The village and locals emanated a comfortable feel and it was easy to relax and contemplate losing a few days here.

Waking up the next morning early, I ventured out to get morning shots of the area and to visit the interior of the gompa. It was full of colorful Thangkas, wall paintings, and tapestries. After an hour of photos we met for breakfast and then reluctantly climbed back onto the bike for the return trip to Leh.

Along the way we invariably got a flat tire and since the road only has a hand full of small villages we had to ride for over an hour with the flat until we found a repair hut in the village of Saspol, were we paid 50 Rs and sat in the sun while the young boy patched the tube. We then doubled back for the bridge that crossed the river and lead to the Alchi Gompa, which dates back to the 11 th century. It was supposed to house some of the best examples of Indo-Tibetan art in the world. However, I refused to pay the entrance fee, since all photography is prohibited in the complex. I opted to sit in the shade of a tree while Cristina did the gompa rounds. We then walked around the stage set village of Alchi. It reminded me of the tourist villages around Sapa, Vietnam. It clearly catered too many package oriented tourists (with deep pockets) with locals dressed in historical clothing and trinket stands at every turn in the well-groomed walkways.

I couldn’t get out of Alchi fast enough. I disliked the package feel from the minute we crossed under the welcoming arches next to the lavish private high school. We took a few parting photos (free of charge), backtracked to the main road by the Indus, and then raced the sun back to Leh.

We reached the walls of the ancient Leh Palace, above the Sankar Gompa, just as the sun fell behind the distant Ladakh Range. Took our closing photos, returned the bike, and then rushed to our favorite restaurant for a solid meal. India was turning out to be a place where our major destinations coincided with restaurants.