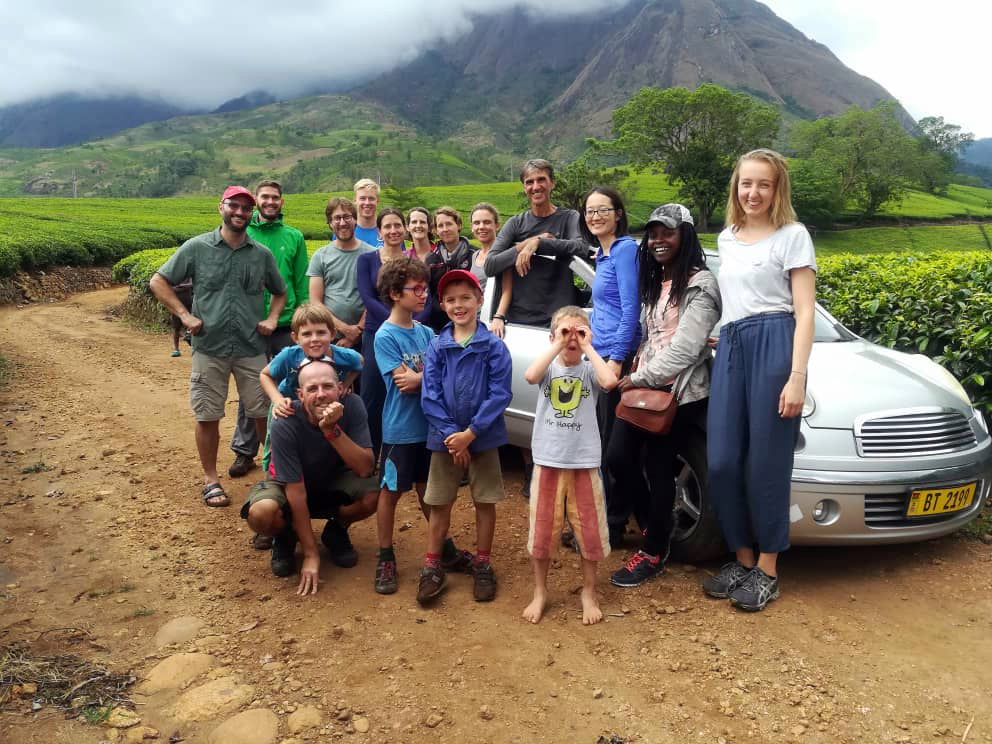 This is a quick post about my 2 day Mulaneje Madzeka trek that included the summit of Nayawani South. I provide details that include maps, costs, logistical requirements and facts as well as links to additional details, photos and videos. This is a self-guided adventure on a shoestring. Follow the links to dig deeper into the adventure.

This two-day outing was organized by Michael of the Mountain Club of Malawi (MCM) that was originally billed as an easy Madzeka Hut Sleepover from the Lujeri Hydro Station at 910m and 5 hours later ending at 1,835 m. However, while at the hut a few of us decided to add the summit of nearby Nayawani to the mix. So this is really two blog posts in one (kind of long).

The Madzeka team consisted of 2 families (4 adults and 4 little children) and 9 individuals of varying abilities. Stir in a guide and a bunch of porters and we were officially an expedition in search of an easy weekend.

However, it is always wise to remember that no mountain is easy! So in retrospect I classify this outing as ‘moderate’. Why you ask?

The trailhead was the hydro station in the Ruo Valley of the Lujeri Tea Estate. The estate is wonderland for walking and enjoying the sounds of laughing children. We quickly sorted out our gear and by 11 am headed out as a snaking Conga Line.

Once across the river (boulder hopping) the going was very easy as we rambled our way through tea and pineapple fields on gentle slopes. Within 20 minutes of starting out the guide called a halt at a small stream and announced that it was lunchtime. 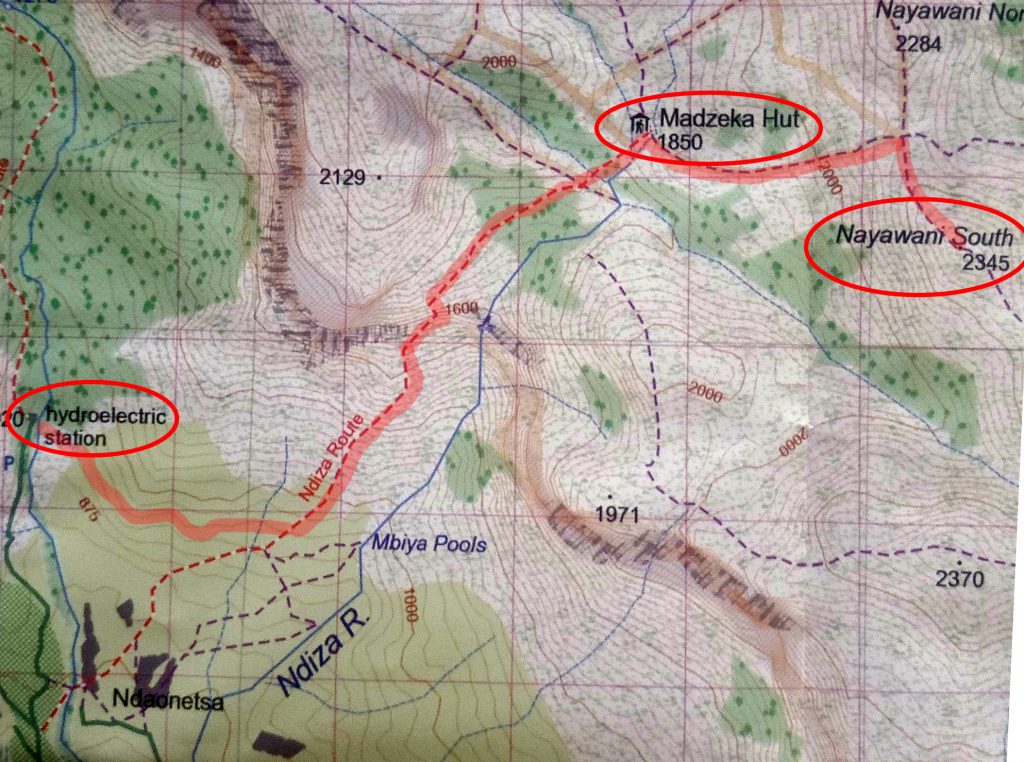 A few of us grumbled but he insisted that this was the best place for a large group to lunch. So we spent the next 30 minutes munching on our goodies, preening and secretly wondering if it was all going to be this easy.

And then the very soon the real trek began and the congruity of our lovely group disintegrated. The trail for the next 2 hours was a steep narrow rock-strewn trail with a few rickety wooden ladders on the higher stretch. The constant high stepping tested our calf and thigh muscles as the trail hugged the cliffs on the left side of the ravine created by the Ruo River.

Very quickly the groups re-arranged themselves like mutating DNA strains whenever the trail opened up a bit. The new grouping was based on individual abilities and opportunities presented at bottlenecks as porters and trekkers vied for positions up the relentlessly steep track. 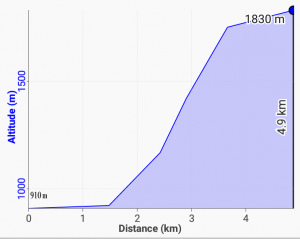 The first trail opening of any size was at a large cave-water hole near the top of the first leg of the steep section. It provided a sheltered spot to take a break and refill our bottles with cold spring water. And then the going got even harder!

The next hour leg consisted of very exposed sections with questionable wooden ladders at intervals. In all cases it was wisest not to look down and especially at the ladder section near the huge boulder hanging on the edge of the cliff face (used as a photo spot for those without vertigo issues).

It was then more ladder work and congestion until we reached a tropical jungle valley lost in time.

The trail in the jungle valley was easy going, shrouded in shadows and laden with a thick coating of rich green moss. A few picturesque plank bridges were provided to complete the Tolkien other worldly flavor. Yet we were not done.

Upon exiting the jungle we climbed a short way to a ridge, crossed it at a firebreak and then started down/up into another valley and along upper Ruo River (or Ndiza depending on maps). We were now finally over the hump with mountain summits in all directions and a short easy walk to the hut.

When I arrived the Madzeka hut (1,830 m) it was already inhabited by half of our group and surprisingly, by the youngest members of the party. The kids had somehow managed to bound up the trail like mountain goats.

I was officially exhausted and my Locus GPS phone App showed me why. We had gained 1,113 m and traveled at an average moving speed of 2.7 km/h over a distance of 9.33 km for 4:21 hours (Madzeka GPS data). The day’s trek was not a ‘walk in the woods’ in my book. It had been hard.

The rest of the afternoon revolved around making hot drinks and a hot Italian pasta dinner. Then wine and cheer as darkness engulfed the mountain.

The plan for day 2 was mixed. Some of us planned to summit near-by Nayawani South while others would go swimming at the water hole and still others would simply rest for the expected grueling descent back to the tea estate. 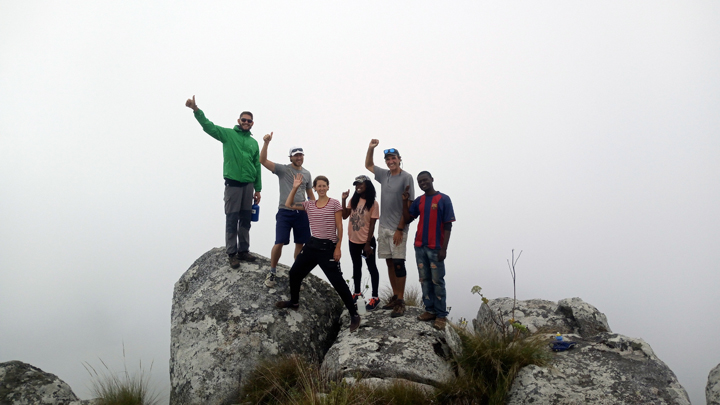 The morning opened to blue skies, sunshine, birdsong and people racket. It took a while to get the summit group organized, fed and moving. But once in motion it stayed in motion. The race was on.

Our hike to the summit broke into two groups almost immediately. The stallions at the front taking the steeper direct route while the casual group using the gentler route that took 5 minutes longer. 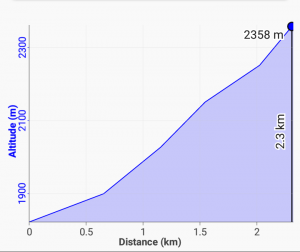 We were at the summit for only a few minutes before the clouds moved in and we realized that our sunny day descent to the tea estate was not going to be a gloomy, slippery slog. While taking our summit photos it grew chilly and visibility dropped quickly. It was time to leave.

We returned to the Madzeka hut as it started to rain in earnest (via a more scenic route) and found that part of the group had already left (the wisest ones). We quickly bundled our gear and headed out after them.

If the ascent had been hard then the descent (in the rain) can be classified as harder on the knees and thighs, slippery and muddy, cold and wet, and un-ending.

Time seemed to stretch as we struggled down the exposed wooden ladders of the upper section and the slippery mud and rocks of the lower section.

We reached the tea fields late in the afternoon in small broken groups. We then worked our way through the maze of local fields and paths until the final very slippery river boulder crossing at the hydro plant trailhead.

We were a very wet and muddy bedraggled assortment at this stage. We pilled into cars and then set out to collect stragglers at various local village locations at the base of the cliff trail.

By 3pm we were all reassembled and then raced off for civilization, showers and hot meals.

What a difference two days can make. Malawi at 900m looked great.