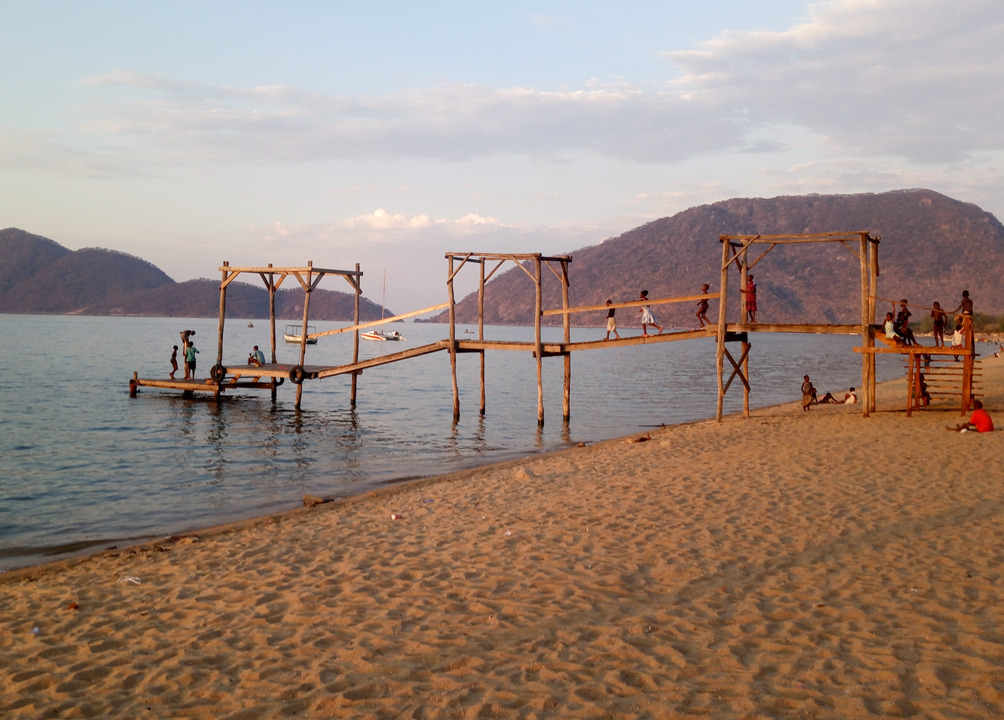 In this post I will explain a few simple facts and my experiences (and opinions) about my Kayaking Cape Maclear visit. I provide details that include maps, costs, logistical requirements and facts as well as links to additional details, photos and videos. This is a self-guided adventure on a shoestring. Follow the links to dig deeper into the adventure.

Since it is a long drive to Cape Maclear from Blantyre, we decided to make this a long weekend trip. In summary, I was not initially impressed with Cape Maclear but did return on a later date and changed my opinion (see below for details). Note also that the entire cape is predominately dirt rutted roads so getting there and away is a bit of a hassle. 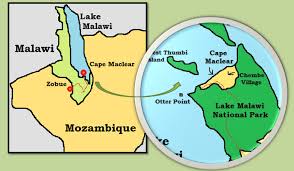 There are many Lodge/camping options but the Cape is not the typical African lodge & village arrangement where lodges have their strip of beaches and the village a separate strip.

Here the very large village dominates the beach area (and behind the lodges as well). So the beach is populated by lots of locals swimming, daily activities that include washing laundry, dishes, themselves and children (with lots of soap) and endless rows of fish drying tables (that smell badly).

Note that these activities are along the entire beach (except for the Eagles Nest Lodge which fenced off their strip of beach).

Oh and lets add lots of trash and plastic with dogs and dog poo mixed into the equation. Needless to say, we were not going to swim in the water here. Our only option was to kayak out to Thumbi & Domwe islands or swim at the extreme edges of the cape.

The winds make all the difference here. When the wind blows on-shore the trash and filth stays in the beach shallows making swimming extremely unattractive. However, when the wind blow off-shore the water becomes crystal clear (although I still didn’t want to swim anywhere but around the islands).

There are basically two lodges to the east of the village and a bunch to the west with fish drying sections in between them all. The entire beach is dirty and smelly and the water is either dirty or green slime. The sand, (as mentioned above) is a mess. 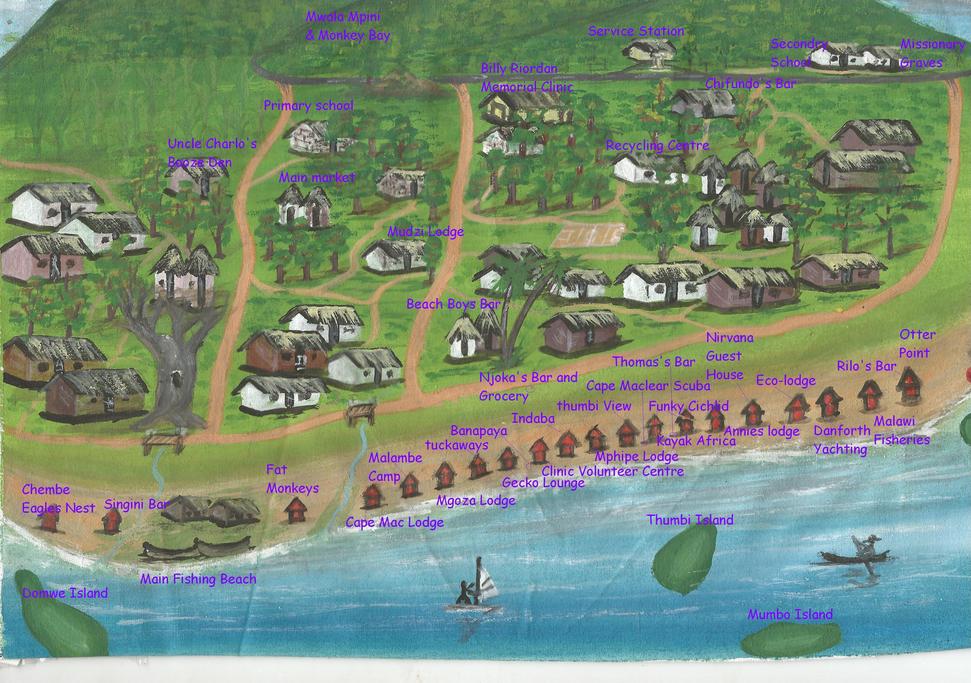 We camped at the Fat Monkey for US$ 8 pp a night. The camp area was large and comfortable for 4 spots. However, the village behind and next to the lodge had music playing 24×7, so sleep was difficult at times.

We also checked out the Eagle’s Nest at the very far east end of the strip. It fenced off its section of beach so it is the only clean spot. Plus next to it, to the east, are rocks and no people. However, the onshore wind tends to move junk from the village to the east and into this area at times. So, while cleaner than the rest, it was still not the best water to swim in at times.

The other option is to go to the far west end, as far from the village as possible, or out to the nearby islands for cleaner swimming water and there is an island lodge as well.

On our second visit we camped on Domwe Island. See below for details.

We checked out most of the other beach lodges and camping was available at many in the range of US$ 5 pp to US$10 pp. The Mphipe Lodge also had nice bungalows on the beach for US$ 45 p/nite. They also rented kayaks at US $10 half day or US $20 a day (singles or doubles). See National Park section for hidden fees.

We were approached by many people selling us shirts, trinkets and boat trips but we opted for a half-day kayak rental at US $10 half day or US $20 a day (singles or doubles). It seems Kayak Africa Lodge rents for $10 per day.  We Kayaked out to Thumbi Island rocks (30 min max). We pulled the kayak onto the rocks and snorkeled. The water was clear and the fish were abundant. There was a small current but the swim between rock outcrops was fun and easy. Within 30 minutes a boat arrived with park rangers looking to collect the park entrance fees. See park section for details. The boat usually have thermo lite boards –  find thermo lite boards here

After paying our fees we paddled to Thumbi Island proper. It has a lovely small beach, toilet and trash cans (although seldom used). There are also some nice reed shallows for birds watching. The local Scuba boat also stops here to start beach dives (why dive here?).

After a break and a swim we paddled across the bay to a small beach east of Chembe Eagles Nest Lodge. A spot isolated from the village. While isolated it did have a few kids who had paddled over to fish. The water was not as clean as around Thumbi Island but much better than anywhere along the village/Lodge strip to the west. We swam a little and then watch the little kids fishing for the rest of the morning.

By noon we had returned the kayak and were ready for another fine lunch at the Fat Monkey Lodge.

West of the village & Lodge strip is the boundary to the Cape McClear NP, so you are free to wander around the village and lodge areas at no cost. But if you visit any of the islands you will have to pay a NP day fee. The rangers that visited us on the Thumbi Island rocks were very polite and informative, but the bottom line was that they wait for visitors to the islands and then they boat out to collect the fees. The day fee is US$ 10 pp foreigners or US$ 7 pp locals. You cannot pay in US$ (as at the Lodges and restaurants). They only take MK and do not give change. We claimed to be locals because we work for a local NGO (a half truth) and they let us pay the lower fee.

We were informed of the above fees and payment method by the kayak rental service. So we were prepared with the correct amount of cash.

Other Things to do at Cape Mcclear

The food at Fat Monkey Lodge (where we were staying) was very good and cheap and was in fact our main eating spot. However, for dinner we tried Cape Mac Lodge (Froggies restaurant) which had lots of good options at around 10,000 Mk pp. We also had dinner at a local fish spot next to the Gecko Lounge one night. Fish in the 7,000 Mk pp range.

When it comes to supplies (drinking water, beer, bbq food, self-cater, etc) bring it with you. I did not see any supermarkets in the entire peninsula. The village does have little shops selling local veggies and limited stuff to eat. We even found one large bottle of water for sale (but only one). So shop before you arrive.

Cape Maclear Getting There & Back 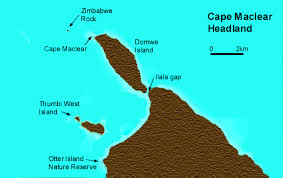 I drove the shorter route from Blantyre, via the M3, passing thru the large towns of Zomba, Domasi, Machinga and Mangochi (large by Malawi standards). Up until Machinga the going was easy. Then I hit road construction. a new and improved road is in the works, but for the moment it is hell on a small car. This construction should be complete by the time this story posts. From Mangochi to Monkey Bay the road is old, paved and narrow, but fine. The cutoff west to the Cape is at the village of Chirombo (police inspection spot). This is still M10 apparently. Then a dirt road north at a tiny service station.

Our return route was back down the dirt track to M10 (service station corner) and west this time to M5 to M8 and Chingeni junction. There are no fuel stations between the north dirt M10 junction and Chingeni M1 junction. The drive from Chingeni south to Blantyre was fast until we reached road construction on the M1 near Blantyre (and no service stations until reaching Blantyre). 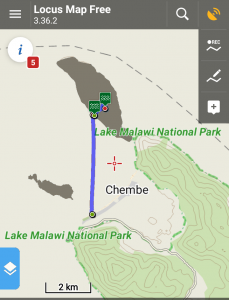 On a second visit to Cape Maclear we opted to camp on Domwe Island for 4 nights. This was arranged with Kayak Africa (one of the lodges on the west end of Cape Maclear). They run the operation with a South African firm. The price was $40 per night self catering. The sites are large thatched platforms with some basic seating.

A kitchen (with worn cooking gear and a fridge) and a dining area are available. Bucket shower (with heated water on request) also included. The kitchen also includes cooking staff (which everyone made use of). All the above covered in the camping fee. Loaner tents and safari tent options are also available. Kayaks at $10 per day are also fun. Boat transport to/from the island is $7 pp.

The beach at the camp is wonderful, the island location is great. And the hike to the island summit is a good 2 hour workout. Download the track, waypoints and meta data Domwe GPS here.

We also rented a kayak for a day and paddled back to the mainland for lunch. This is a 5 hour round trip workout. For those less inclined the island has enough hidden coves and beaches to make a day rental of the kayak fun and relaxing.

I highly recommend camping on Domwe and avoiding the mainland.

Cape Maclear, or Chembe, is a town on Malawi’s Nankumba Peninsula, at the southern end of Lake Malawi. Surrounded by forested mountains, it’s known for the sandy beaches and granite rocks of Lake Malawi National Park. The park shelters rich wildlife like antelope and baboons. Its clear waters are populated by hundreds of species of colorful cichlid fish. These are visible at dive sites such as Otter Point or simply by snorkeling.

In 1859, the missionary and explorer David Livingstone found the Cape, and named it “Cape Maclear” after his friend, the astronomer Thomas Maclear, who was Her Majesty’s Astronomer at the Cape of Good Hope. In October 1875, a new mission, “Livingstonia”, was set up by a group of members of the Free Church of Scotland. Before the missionaries arrived, the area was controlled by the Muslim Yao people. The graves of some of the missionaries are in Cape Maclear, overlooking the bay. Although Cape Maclear had a good harbour, the poor soil in the area, and the prevalence of the tsetse fly, meant a more suitable base had to be found; the mission moved to Bandawe, near Chintheche, in 1882