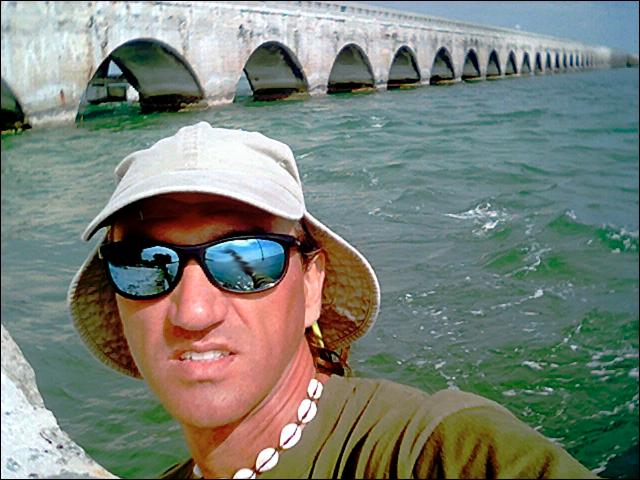 This is a quick post about my ‘Kayak from Miami to Key West’ adventure. I provide a detailed route map, photos and full day-by-day narrative on the associated support page. This is a self-guided adventure on a shoestring. Follow the links to dig deeper into the details.

Whose stupid idea was it to paddle a kayak from Miami to Key West anyway? That was the thought that kept echoing through my head, like a mantra, as I paddled desperately into the waves and away from the pounding surf. In truth I was to blame for the misadventure.

It all began on Thanksgiving weekend, in Key West, when I was introduced to Jim, the owner of the Black Duck sailboat. She was a beautiful 37 foot catch with classical lines. Jim had volunteered to take out a small party for a short sail simply to taste some salt and feel the roll of the sea beneath our feet. Jim has had a turbulent relationship with the sea and can’t resist any excuse to return to her embrace. While boarding the Black Duck I noticed that he had two kayaks moored to dock.

I asked about them and he replied that he used one for kayaking and the other simply sat around waiting for a purpose. That is the kind of one-liner that invariably gets me into trouble. I then inquired about its sea worthiness and if it was for sale. Jim immediately acquired a shrewd expression and asked me if I was interested in his fine second kayak, the one that had tremendous sentimental value to him. I laughed and declined simply by stating, “What would I do with a kayak?” His response was, “paddle it to Miami or from Miami here to Key West.” Now that is what I call sinking the hook deep. I explained that I had never paddled a kayak and was doubtful that the venture could be accomplished. So before I know what hit, I was the poorer $250 and richer by one green sea kayak in slightly used condition. I promised to return to Key West within a few weeks to collect my new green machine.

I returned to Miami after the long weekend and immediately began to consider the venture. I’d spent many a week paddling canoes in the Canadian wilderness when I was in high school (a long time ago) and had recently done some light camping. With these two skills I figured I could paddle a kayak two hundred and fifty miles from Miami to Key West in a reasonable length of time. What constituted ‘reasonable’ was an unknown as I had no actual experience to use as a baseline. How many miles a day can a healthy person kayak I wondered? Then divide that in half since I was starting from scratch in this field. I figured I would simply start out and figure it out as I went.

For navigation purposes I used Waterworld Charts software, which has NOAA detailed harbor and small craft charts for the entire Florida Keys. With the software I was able to print sectional charts for the entire route and some alternatives in case I switched between the Gulf and Atlantic side of the island chain. I also had a Garmin eMap GPS with vector charts for the entire Keys that I would use to mark waypoints and as a backup to the printed charts.

For accommodation I had a small one-man Eureka tent and the numerous islands or beaches would provide ample sites. The Keys also have many of State and private campgrounds. And since the Keys are essentially a string of islands they are dotted with marinas that supply boaters and fishermen with supplies and facilities (i.e. public bathrooms). If you want the best bathroom and plumbing services for your homes, check this here and get them at the best deals.

For food I put together a small bag containing cans of baked beans (or bush-tukka as the Australians say), sweetened fruit, granola bars and powdered drinks (to add to my water bottle) and a gallon of emergency water. My goal was to carry at least two days of water and food. I would replenish my supplies each other day or as opportunity provided.

And finally, for safety purposes, I was carrying a cellular phone. I had made arrangements with my son to expect a call each evening. Around sunset I would call and leave my camping waypoints (latitude and longitude). If for some reason I failed to call on any particular evening, he was to contact the Coast Guard, explain the situation and give them each day’s waypoints. In this way they could determine my daily average range, my direction of travel and therefore commence a search and rescue effort within a fairly concentrated area. This approach is the equivalent of leaving a Float Plan with friends before heading out to sea, except that my plan would develop as I went and the real-time updates would provide a level of accuracy that a static float plan lacks.

While I had been in Miami preparing for the trip a good friend, Jamie, had collected the kayak from Jim and stored it at his place, which was located on Stock Island, with access to Cow Key Channel. I arrived at Jamie’s late in the day and spent the night in his hammock under the stars. The next morning I dropped the passenger seat of my Stealth, opened the hatchback and slid the kayak in. One third of the kayak stuck out the back but with tie-downs I was able to close the hatch half way and fit the gear in the vacant areas around or under the kayak. I drove off for Miami with a plan to return to this very spot very soon, not by car, but by sea.

This story continues with the Link to Narrative…