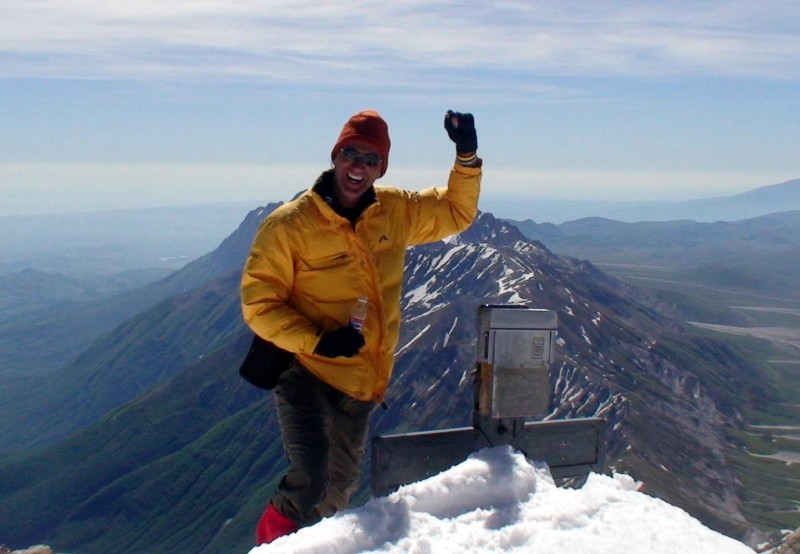 This is a summary post about how to summit Corno Grande in Italy’s Grand Sasso range. I provide details that include maps, costs, logistical requirements and facts as well as links to additional details (a long narrative), photos and videos. This is a self-guided adventure on a shoestring. Follow the links to dig deeper into the adventure.

First let me point out that I did this summit attempt seven times over three years. I did it each time solo in the early spring or late fall.

I also did it up the steep face. For those with more sense I suggest using the gentler approach from the west and doing it in the summer when there are less harsh conditions and the Refugio and shelters are open.

You can start this trek from the north side of the mountain but I did it from the south at ski village Funivia (which means Ski Lift).

The lift is generally only running in the winter and summer (not spring and fall when I did the trek). You can hike up to Camp Imperatore easily and make that your base camp. There are (or were depending of post earthquake repairs) Rifugios on the Campo (plains). There is also an abandoned old lift building about 2/3 of the way to Campo that I used as free shelter.

There is an emergency room (left unlocked) at Campo in the Ostello building and another higher up at Rifugio Duca deli Abruzzi that can be used as additional base camps.

I used trail #4 for all attempts and then up the face (dotted line) to reach the summit. But this required gear and good weather. I also stayed in a cave (see video) for the night on the right (west) jog of the the #4 trail when I was searching for the emergency high shelter (red building marked in yellow on this map).

For an easier route use #3 and 3A. I used this route for my return from the summit.

Note that CG has 3 distinct summits. Peak Occidentale, 2912m, is the highest and the target of my attempts. Use different routes for the other summits.

For the full narrative visit this page. 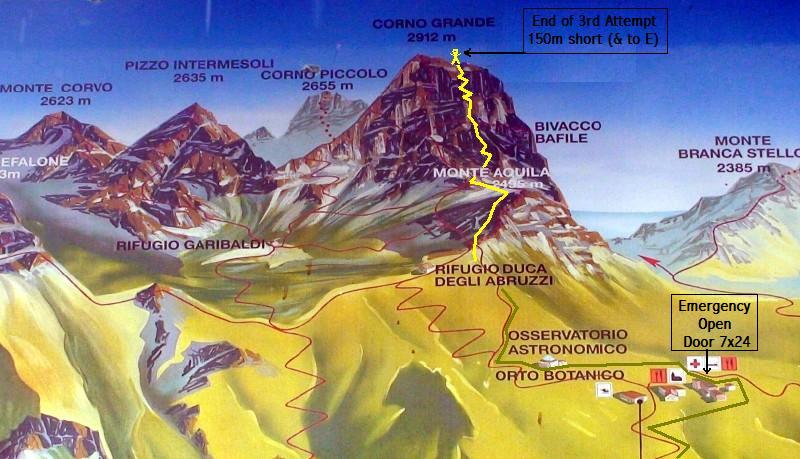 Route map of my third attempt.

Note that there are many maps of the area. This is a large poster at the base of the lift that I modified for simplicity.

You can also buy maps at the coffee shot in the ski village. The coffee shop is open year-round.

Emergency Room at Campo Imperatore (7×24). The bathrooms were locked when I visited in 2010 so I followed the tunnels to the Gondola building and unscrewed the locks on the bathrooms located there (for water mostly).

The Fifugio Duca has a three-bunk emergency room open 7×24 but no water or toilet facilities out off season. This is an ideal spot to spend the night before a summit attempt since it puts you at 2300m and a clear view of CG and the weather. Yet it is a cold and windy spot.

Corno Grande, king of the Gran Sasso Massif, also known as Italy’s “rocky heart”, is the highest mountain on the Italian mainland outside of the Alps. It is part of the Apennine Range and consists of four peaks, called Vetta Occidentale (occidental summit, 2912 m), Vetta Orientale (oriental summit, 2903 m), Vetta Centrale (central summit, 2893 m) and Torrione Cambi (2875 m). There are technical routes to the summit as well as a number of trekking trails.

The easiest of the trekking (and well marked trails) begin area called Campo Imperatore (2128 m) on the southern side of the mountain. This is area is located at the top of the gondola lift (part of the winter ski village) and houses a number of hotels and albergo (cheap hostel). Note that this mountain is considered a summer climbing and winter skiing mountain. As a result all the accommodation on the mountain closes around mid-September and doesn’t re-open until the beginning of the winter ski season.

Accommodation can be found year-round at the base of the gondola in the village called Fonte Cerretto (Funivia). A hiking trail is located next to the base of the gondola that winds its way up the mountain to reach Campo Imperatore (top of the gondola) after about 4 hours of trekking. Half way up is an abandoned old gondola building that is usable in a pinch. There are also emergency bunk rooms available above Campo.

A trek to the summit from Campo Imperatore should take about 5-6 hours in summer conditions. Note that it will take longer in the fall and spring when the snow half way to the summit is wet and deep. Obviously it is best to summit in the summer or the cold of the winter rather than slog thru knee to waist deep snow for hours. Summer is short at this location.

Basically there is snow on the mountain most if not all year. I have found snow in September and as late as the end of May. So outside of June, July and August, I recommend crampons, gaiters, and an ice axe. Note that I have not visited in the summer so snow gear may also be necessary. Best to call one of the Rifugioes and ask since they are open in the summer.

Take 2 ½ hour bus from bus station to right side of Triburtina metro stop (blue or B line, 4 stops from Terminni in Rebibbia direction) in Rome, to town of L’Aquila bus station. From there take local Line 76 (or M6 or M6S or M6D route extension) bus. See Other notes below.

From Rome, the ARPA bus is cheaper (9.50 Euro) than the train and takes half the time. For ARPA bus tables (basically a bus every hour) to L’Aquila visit:

From Rome I suggest the ARPA bus (see above). From/to Ancona take the regional train (13.30 Euro) and transfer at Terni. A 4hr ride in total. http://www.ferroviedellostato.it/homepage_en.html

Many ferries run to/from Ancona which has cheap and easy rail service to L’Aquila. I prefer the Blue Lines when they have Internet cheap fare deals.

This company specializes on the Apennine area and has numerous 1:25000 options covering the area. The specific needed for Corno Grande is No 3, Grand Sasso. Note that the one I looked at did not have longitude or latitude grid markings on it (which makes it kind of useless for me).

This is a 1:25000 small map with the entire trail and refuge details, etc. It comes in most common languages, cost only 4 Euro, and I found it at the La Villetta Restarante in Fonte Cerretto at the base of the gondola.

From train station take any bus or mini-van (#5 or #8) to Bus Terminal. From terminal you want to reach the base of the gondola for the trail head (called Funivia). You take bus #108 Paganica Piazza to transfer. M6 mini-van no longer leaves from the Terminal, however twice a day (just after lunch) there is a full size bus #6 that goes all the way to Funivia. From Paganica Piazza transer to the M6 mini-van to Funivia.

Since the earthquake the center of L’Aquila has been abandoned so to get supplies you must visit supermarkets outside of town (take a bus). The easiest option is to visit the Supermarkado that is a short walk from the Pagainica Piazza (in the direction that the M6 bus travels when going to Funivia). Ask directions and follow the sign posts. This one is open until 1pm and then re-opens at 4am.

Alternatively, stay on the #108 bus to its turn around point in the Industrial Area. This is also the starting point of the M6 mini-van. This supermarkado closes at noon and re-opens at 3pm. After shopping, cross the street and wait for either the #108 back to Paganica Piazza or catch the M6 all the way to Funivia.

The M6 mini-van runs from 9am until 7pm.

Note that these facts may change as the area recovers from last year’s earthquake.

When on the bus from the train station you will soon be on a long up-hill narrow and busy road. On your right hand side (while facing the front of the bus) you will see a small sign on the side walk that says trekking equipment. I did not stop to check out the store but it did seem to have a lot of gear. Instead I visited the Quota 2910 ExtraStore (SS17, 34Q, Via Patini 69, 0862.404160) to buy my crampons and gaiters. This is a bit of a walk to the outskirts of town. It is on the road that the 8/5 bus takes beyond the train station or just before the highway entrance or just before the ARPA bus stop outside of L’Aquila. It has a full range of NEW equipment only.