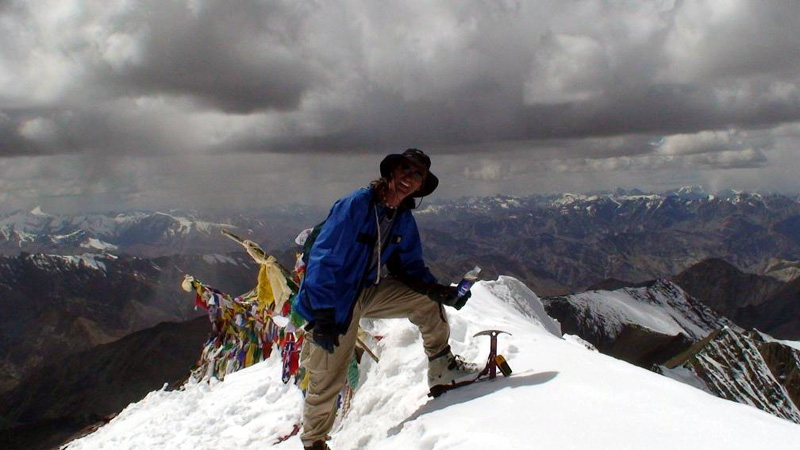 This is a quick post about how to Summit Stok Kangri, in Ladakh, India. I provide details that include maps, costs, logistical requirements and facts as well as links to additional details, photos and videos. This is a self-guided adventure on a shoestring. Follow the links to dig deeper into the adventure.

Beaten By A Mountain

Stok Kangri is a six-thousander located south of the town of Leh, in the Indian state of Ladakh.

It is officially considered a trekking mountain, but that definition depends on the amount of accumulated snow and resulting rock climbing. I determined to summit Stok because it would give me my first six-thousander and because there appeared to be no permit restrictions (even though various trekking sources indicated otherwise).

I started my inquiries at the Trance Terra outfitter. They put together summit groups of 2-4 persons for a fee ranging $40-$45 a day (four day trips). The fee included guide, donkeys, cook, food, tent, and gear (gloves, down jacket, boots, crampons, ice axe, etc). This is a remarkably reasonable price for a climbing package, especially when compared to Nepal. Unfortunately no groups were forming due to the late date (the season effectively ends September 1), plus I was informed that it was snowing in the mountains. I resolved to wait up to three days for a group to form or I would simply rent the equipment and attempt to summit solo. 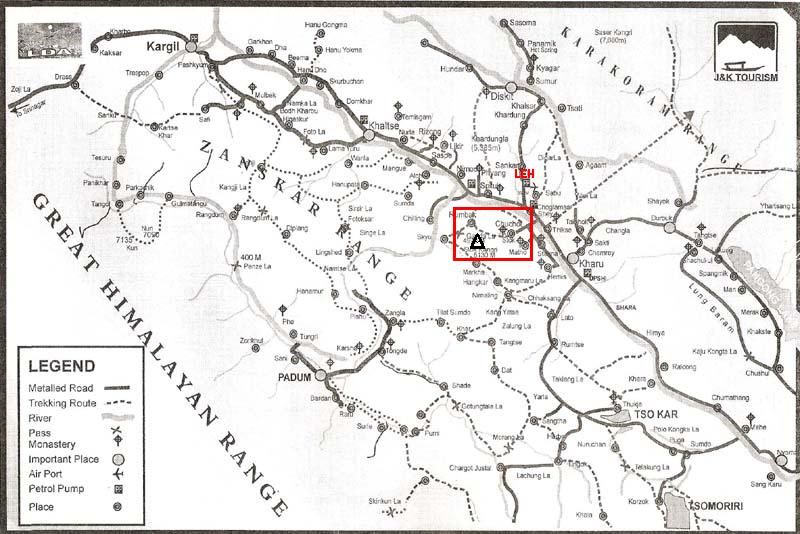 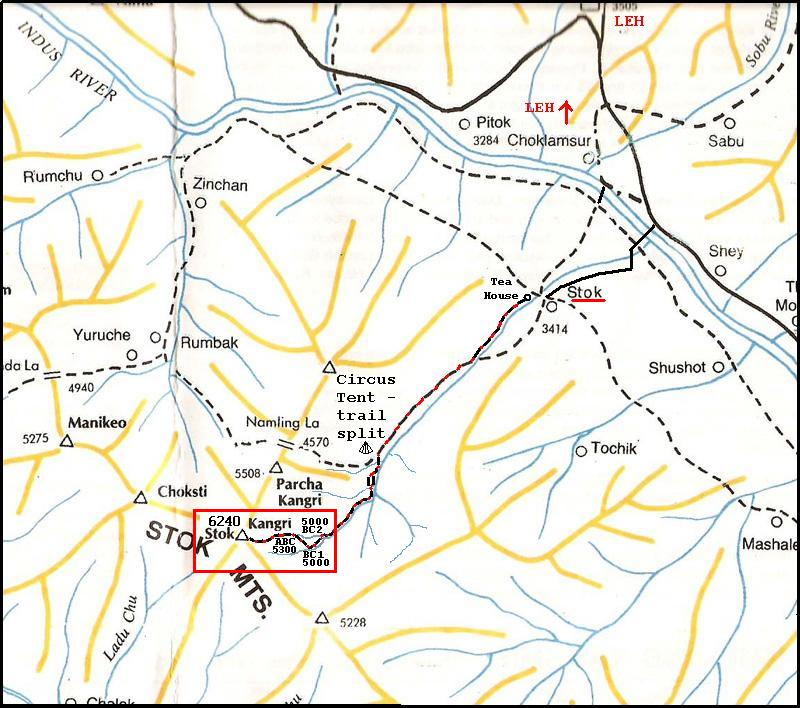 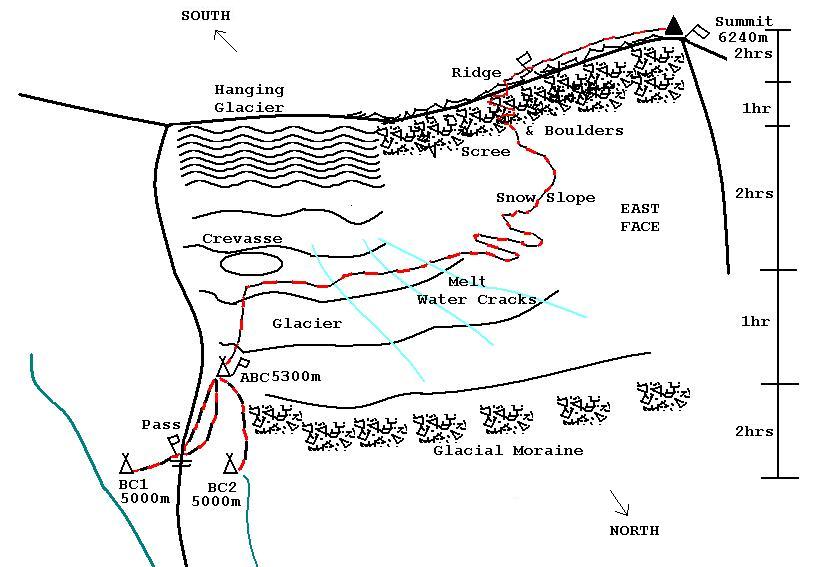 Route Details From Base Camp 1:

Average ascent is 8 -10 hrs from Base Camp to Summit. Departure is usually 4am. Return to Base Camp is 2 – 3 hrs. These estimates vary due to snow conditions.

Base Camp 2 (BC 2) is located in the first valley, while Base Camp 1 (BC 1) is in the second. BC 1 contains less difficult terrain and a tea tent (so is a better choice). From BC 1 (5,000m) climb west (away from the river) following the steep path to a small pass (with flags) at the top of the ridge that separates BC 1 from BC 2. The path here splits. One goes part way down the opposite slope in a south-west direction (up the valley), while the other follows parallel, but higher (the better option since it saves you having to re-gain elevation later).

For the upper path follow the ridge, heading up valley, for about 50m (small cairn marks the trail) where it then leaves the ridge and tracks south-west above the other. From here both trails steadily climb along the east side of slope, around two bends, and then a short climb to Advance Base Camp 5,300m. ABC comprises four tent spots located along side a prayer flag marker and east of the leading edge of the glacier. Note that there is no water at ABC and it is much colder at night than BC 1 or BC 2. You will need drop down to the glacier to find water. It takes about 2 hrs to reach ABC from either BC 1 or BC 2. Camping at ABC cuts the ascent time by 2hrs.

From ABC follow the trail south-west as it runs along the east side of the glacier into the bowl of the valley (following the few cairns). The path turns sharply to the west just before a large crevice, then crosses a number of melt streams / fishers to the steep base of the east face (1 hr from ABC). Here the trail begins to wind its way up to the south and over two humps. From here the trail becomes very steep. If covered in snow you can go west and straight up (the hard way) for about 200m, otherwise zig-zag up until reaching the even steeper scree and boulders to the south of the snow slop (another hr). At this stage you can cut south and climb the zig-zag trial thru the rocks to reach the ridge about mid-point (another hr). The trail is hard to follow and the footing slippery and difficult at this stage.

The ridge is the most logical approach to the summit, even though you could continue up the scree slope. From the ridge turn right (north) and begin a cautious and difficult trek towards the summit (not visible until within 50m of it). This portion includes a considerable amount of rock climbing, plus the trail thins in places to less than a meter with sheer drops on either side. The views along the ridge are dramatic and daunting. If snow covered (which is generally the case year round) the trail may be difficult to find and you will have to decide whether to climb over or scramble around large rock structures (another 1-2hrs).

The last 50m to the summit are gentle and to the west of the false summit that you have been looking at during the ascent. It is quite narrow and sheer with breath-taking views in all directions.

Reverse your track to return to camp (2-3hrs).

A private bus leaves Leh for the village of Stok (1hr trip), from the New Bus Park each day at 8am, 2pm and 4pm (cost 20rs). The bus stops about 100m short of the washed out bridge. It returns to Leh at 9am, 3pm, and 6pm. These times are flexible because this is a private bus, so will hang around looking for passengers before leaving.

There are no jeeps or taxis from Stok.

Accommodation & Food on the Trail:

In Stok village there are a number of tea houses across the river at the washed out bridge (end of the road) that offer food, but the nearest accommodation is about 500m up the trail on the right side of the river (going upstream). It offers home stay and a tent area.

On the trail to the mountain there are no facilities so a tent is mandatory. There are circus tents located at the trail split (left to Stok Kangri and right or straight to Stok La), about 1km before base camps, and at Base Camp 1 (left fork going up stream). These offer tea, beer, soda, and instant noodles, but no place to sleep.

Note that there is no water at Advance Base Camp.

Lah is one of the few (and only one to date) places where sharks do not wait at the bus or taxi stands to pitch their accommodation options. The seven of us that arrived at 11pm on the shared jeep had to actually walk around the dark town waking up Guest House owners in order to find rooms for the night. All were full, but finally one owner called another one, who called another and then walked us to the Ree-yul Guest House (limbijal@rediffmail.com) which had two rooms we could share at 125rs a head. The next day I switched to a single for 100rs a night. This is a very friendly and easy-going Guest House.