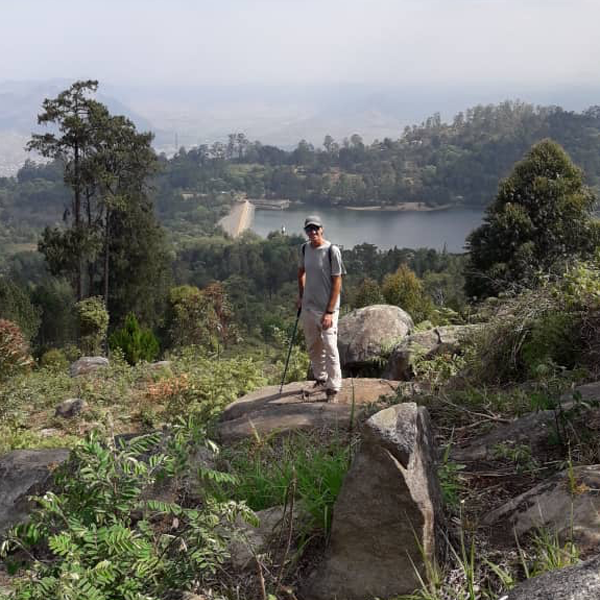 The Zomba plateau hikes are day outings near Blantyre, in Southern Malawi. I provide details that include maps, costs, logistical requirements and facts as well as links to additional details, photos and videos. These are a self-guided adventure on a shoestring. Follow the links to dig deeper into the adventure.

The Zomba Plateau offers 11 walks (hikes) of varying lengths (from 35 minutes to 6 hours in duration or any combination of sections). The plateau rises 1800 m above sea level and contains forests (managed, un-managed and pilfered), a few mountain peaks, streams, waterfalls, dams and open grasslands. A paved road leads to the top (steep winding road) from the village of Zomba. The plateau on top has a single paved road and many rocky dirt roads and 4WD logging tracks.

This was a two day outing to hike on the Zomba Plateau simply because we didn’t want to do the 55 minute drive from Blantyre in the morning and return the same evening and more importantly, we wanted to camp and eat at the outstanding Casa Rossa Restaurant and guesthouse located on half way up the road to the plateau. 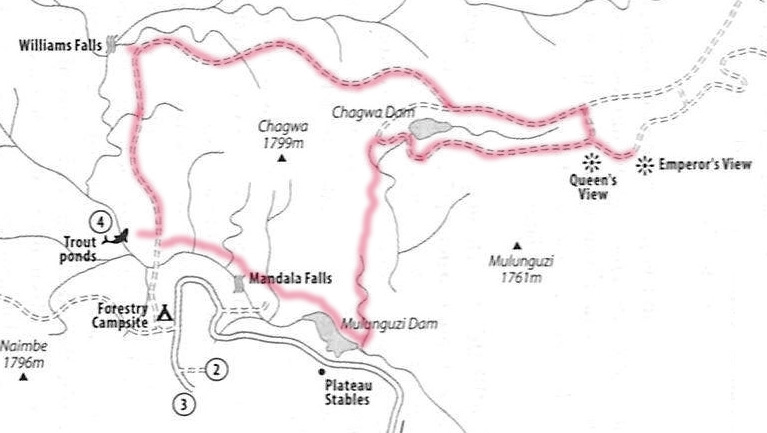 We set out mid-day from Limbe to reach the town of Zomba around 1 hour later. The town is a two-road commercial strip with all the basics (banks, gas station, fast-food chain (Steers), liquor store, small local supermarkets (Peoples) and the local market). The turnoff for the plateau is clearly marked in the center of town (Mountain Road). See downtown Zomba Map below.

Just to the left on the turnoff is located African Heritage Art & Coffee Shop, attached to a country club & football pitch. The Art shop includes a bookshop (new and used books). I purchased a ‘detailed’ map of the plateau called ‘A Guide to Zomba Plateau’ for 1800 MK but it was almost useless, yet better than nothing. There is also another bookshop at the CCAP Church one intersection past the mountain turnoff, on the main road. See below for details.

A short zigzag distance up the turnoff we pulled into Casa Rossa Lodge, Campsite & Restaurant. An Italian owned and run hot spot for expats. They have a pretty decent campground (with electricity and breakfast for 7500 MK pp). See below for more details. We setup our tent and then spent the remainder of the afternoon visiting the lower town for shopping and then lounging and eating. 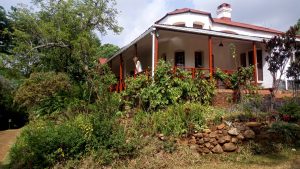 There are three campsites on the upper plateau. The main one (Forestry Campsite) is near the Kuchawe Inn-Sunbird (still open?). The Chitinji campsite (western side of plateau) is on the road to Mlumbe peak. It has hot showers, etc and guide services. The third and lowest quality (but in a lovely setting is the Trout Farm & Pick-nick area (north of Forestry Campsite). See details below.

The following day we continued up to the plateau. It is a long winding road that I would not recommend walking. Either drive if you have a car or rent a ride on a motorbike.

The winding dirt roads on the plateau are very confusing and unmarked. There is a paved section but it is very limited (ending at the Sunbird). The balance are either bumpy/rutted dirt or 4WD logging roads.

We visited the expensive Kuchawa Inn (Sunbird Hotel) to check it out and then proceeded to the Trout Farm (from high end to low end). We used the farm to park our car (300 MK pp and 200 p car) and then start hiking. Note that there is free parking in front of the Sunbird gated parking area. 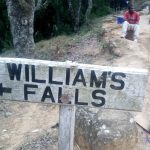 We set off uphill on the dirt (rocky) road parallel to the Trout farm, heading north. After 15 minutes we spotted a small signpost for William’s Falls. The falls is about 30m down a trail to the left.

After rejoining the ‘road’ we continued north by east. The road turns into a logging road (illegal I am guessing). We walled through many small logging camps. The sound of chopping or chainsaws was always in the wind. We stayed parallel to the Mulunduzi stream as we slowly gained altitude. There were a number of turnoff trails but we stayed on what appeared to be the most used.

In about an hour we reached a junction with two sign posts (one for Emperor’s View and one for Queen’s View) pointing right. We turned and continued down another dirt logging road. We were shortly on the edge of the escarpment. Both lookouts are about 20m from the dirt road and almost in sight of each other. Each is clearly marked by signposts and selling stalls. The actual viewpoints are have wooden benches, a view of the lower valley and distant mountains (and strong winds). 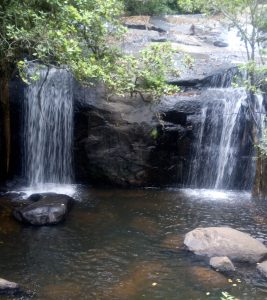 From Queen’s view we headed back west, but this time hugging the escarpment. We followed the most dominant of the dirt logging roads and avoided turnoffs until we reached Chugwa Dam (a small pond). Do not go straight beyond the dam (it leads down a dusty, burned and active logging road). Follow the track right (across the dam to the base of the adjoining slope). Here we turned left and followed a lovely leafy double dirt track until we reached another dusty junction (T).

We then started a winding descent on an actual hiking trail (not a logging track). It wound down parallel to a small river gorge (over a rocky crest and then down through a pine forest) until we reached another seldom used junction. We continued down through the forest until we reached a well used dirt road.

We turned right (west) and were shortly at the north side of the Mulunguzi Dam. A lovely picnic spot. A wide flat grassy area winds west along the dam’s lake but it ends before the Mandala Falls. We backtracked to the well used dirt road and continued to the west (parallel but higher than the lake) on the road.

Staying on the main dirt track we soon re-joined our starting dirt (rocky) road next to the Trout Farm.

We turned left and crossed down to the parking area of the trout farm to end the hike. Total time 3 hours. 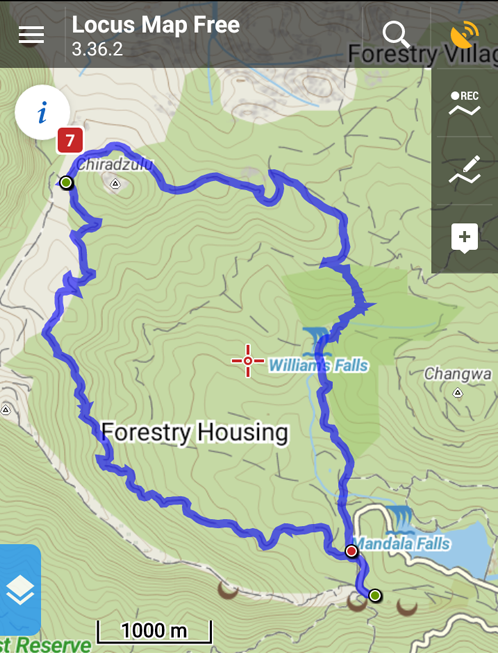 This is an easy and picturesque day hike up onto the Zomba plateau that starts from he Sun Bird hotel, climbs up to the upper reaches of the range, fringes the grotto, loops around Mt Chiradzulu (different form the other Chiradzulu peak near Limbe) and then works its way east and then south, dropping back down from the upper regions to Williams Falls and then back to the start.

It takes around two hours to reach the grotto with an increase in altitude of 500m (from 1474m to 1935m) over a distance of 7.30km. The ascent trail is initially mostly shady and then opens up to exposed grass meadows along the top to the grotto.

The descending loop also takes around two hours, and covers an additional distance of 7.15km. It is almost all grass lands (no more trees) and un-shaded until reaching the Williams Falls area, where swimming is optional.

The loop around Chiradzulu has outstanding views to the north that include the backside areas of the Zomba Reserve, additional mountain ranges and on a clear day, distant Lake Malawi.

Accommodation on the Zumba Mountain Road

Accommodation on the Plataea

Super expensive and upscale. There is free parking in front of their secure parking area (across from the trinket stalls.

Maps.me is a free and easy phone app for navigation. Click the links to show the GPS location on a map in your browser. For those wishing more features and perhaps better free maps, check out  Locus app.

Download the zomba grotto williams falls hikes GPS zip file and load it into your phone’s Google maps or a phone GPS app such as Locus. Then you will have a track on your phone that you can follow when confused.