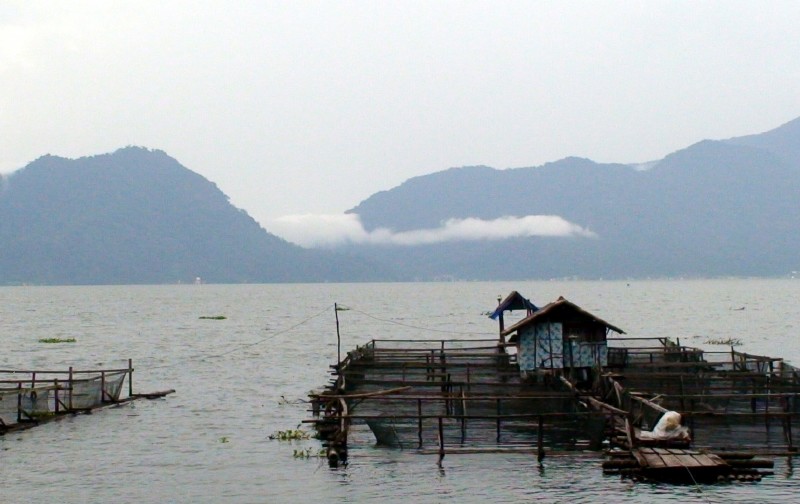 In this post I will outline how to take a scooter ride to Lake Maninjau, Sumatra, Indonesia. It includes logistical requirements, photos and facts (map, costs, background info). This is a self-guided cultural experience on a shoestring.
Difficulty Level:

Lake Maninjau is a caldera lake in West Sumatra, Indonesia. It is located 36 km to the west of Bukittinggi

Scotter Ride To The Lake Maninjau

From Bukittinggi follow the road down the Canyon to the bridge and cross the river. Follow the road along the river (downstream) and pass lots of villages at the road. After ca. 7 Km you leave the canyon and at the T-Crossing turn right. This is the main road to Matur. In Matur buy peanuts. You need peanuts to feed the monkeys. They waiting for you at the U-turns down to Maninjau (Take nice pictures from the monkeys).

Map No. 1: From Bukittinggi down to the Canyon

In Matur turn right at the crossing, after half aroundîng the sporting place. This is the road to Lawang village. In Lawang village turn left at the gate. This road leads you up to the viewpoints at Lawang Top (Puncak Lawang).

From Lawang Top follow the same road back to Matur and turn right at the crossing at the sporting place. Follow the mainroad to Ambunpagi and the 45 U-turns down to Maninjau. In Maninjau at the main crossing turn left or right to drive around the lake (ca. 38 Km). Left around is better, the sun shines mostly from behind.

After Matur choose to go via the canyon you came from, (at the T-Crossing to the canyon turn left) or choose the mainroad straight to Bukittinggi via Pahambatan and Padangluar. At this part of the road is a spectacular viewpoint too. 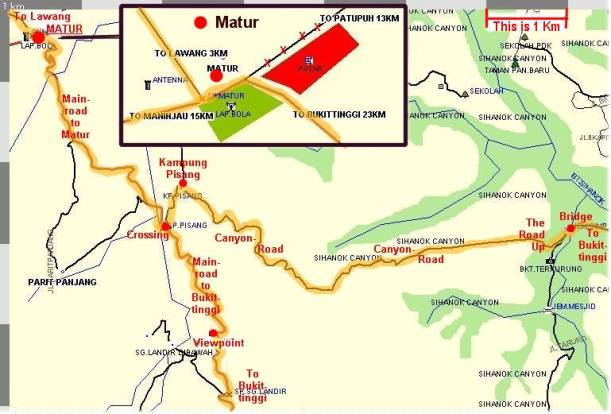 Map No. 2: From the Canyon up to Matur 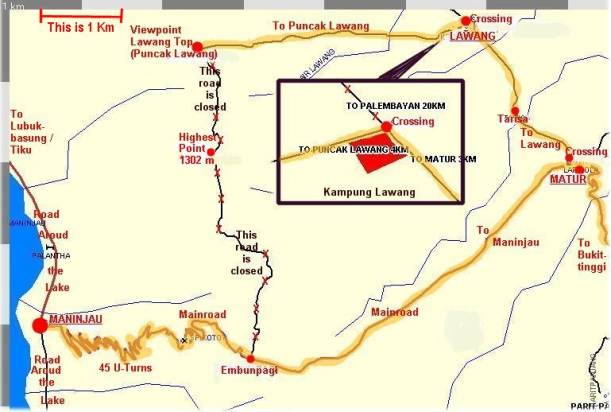 Map No. 3: From Matur & Puncak Lawang to Maninjau

Daytrip To The Lake Maninjau by Scooter

A daytrip on a scooter in most places in the world would not amount to much adventure, but in places like Indonesia, simply taking a bus can be an adventure so when Ulrich (the proprietor of the Rajawali, in Bukittinggi) suggested I hire a motorbike and ride around the countryside I was immediately enthralled.

The next morning I walked up the road to a small shop selling used paperback novels from the 40’s that had a hand painted sign out front that read ‘Motorbike Hire’. We rented their new scooter (automatic transmission) for 60,000 IR for the day ($5). I then returned to the Rajawali to pickup Cristina and directions that Ulrich had printed for me (see the Maps & Facts page for his directions and Other Adventures for many more).

We squeezed onto the tiny scooter and then rode to the town center (clock tower) and then turned to get on a steep downhill winding road that lead to the Canyon floor. We then rode through the canyon following the river as it wound its way to the north. The one-lane ‘road’ passed through lovely small hutments (one or two shacks) and along flooded rice fields. It was an easy and picturesque ride. After a while the road began a steady rise out of the valley to join the main road leading to the ‘bustling’ village of Matur. Actually the main road and the canyon road were identical. A narrow paved road without divider, boxed in by tropical vegetation, and scattered shacks at intervals. After a short winding rise we pulled into the village of Matur, which was simply a cross road with a small market, an abandoned building, a mosque, and an over-grown football field.

We stopped to buy some drinks from a vendor where we were treated as though we had fallen from sky and were exotic space creatures. We dutifully walked around for a while to let them examine us and then we got back on the scooter and turned to the right at the football field in order to reach the Puncak Lawang (or Lawang Lookout). We rode through the village arch of Lawang (to the chorus of school children shouting ‘hello’), past more rice fields and more mosques, and then up to an arc where the road made a sharp right and an enterprising young man stood in the middle of the road. He greeted us happily and confirmed that we were indeed at the turn-off for the lookout and that we had to each pay a 1,500 IR entrance fee ($ .08 each). Reluctantly we paid the fee and then drove up the winding road to the lovely lookout huts were Cristina got off to sit in the shade and stare at the lake in the distance. I continued up the road to survey the dirt track that continued on up the hill and out of site.

We had been strictly warned by Ulrich that this track was not usable and that only the first km looked inviting, then it turned into large boulders and if the scooter got a flat tire or broke down it would be a long and sweaty 5 km walk/push to reach the nearest road. In spite of these warnings I followed the track for quite a while and enjoyed it immensely. It was my kind of road, but I knew that it would be impossible to continue in that direction with two people on the tiny scooter, so I turned around and returned to the lookout to re-join Cristina, take some photos, eat some cookies and continue on toward the day’s objective.

We backtracked to Matur where we purchased some peanuts since Ulrich had promised us that we would meet begging monkeys on the descent to the lake later in the ride. We then turned back onto the main road and continued through lovely countryside until we reached the village of Ambunpagi where the road began a very steep and winding descent to the lake. We wound our way down 45 sharp and steep U-turns as buses, scooters, motorbikes, and jeeps struggled in the opposite direction. It was an exhilarating ride, especially with the dark storm clouds that had formed in the gap between to high mountains on the opposite bank.

We stopped at one point and were immediately accosted by families of small grey monkeys begging for food. It was fun to feed them but Cristina felt uncomfortable and became frightened as the animals became more and more emboldened. Eventually I gave up the balancing act of filming, holding the scooter up, re-assuring Cristina, and feeding the monkeys. A little pissed, I tossed the remaining peanuts into the grass and pulled out to continue the downhill gyrations. As we approached the 14th U-turn from the bottom (they are conveniently numbered) thunder began to rumble and lightning lit up the sky across the lake. We picked up our pace in order to reach the bottom with enough time to backtrack before the clouds and rain reached our side of the lake.

At the bottom of the last U-turn we entered the village of Maninjau, which was basically a tourist trap. We rode a short distance in a counter-clockwise direction around the lake passing lots of nice and not-so-nice guesthouses, rabid dogs and vendors. After only a few minutes it began to rain so we stopped to consider our options. Rather than getting stuck at the bottom of the long and winding road out of the lake valley we opted for an immediate return. We turned around and began a long ascent (harder due to the lack of gears on the automatic transmission scooter).

We reached the top of the rise and then raced back to Bukittinggi, always a short distance ahead of the rain clouds and only felt occasion sprinkles from time to time. When we reached Bukittinggi it was around 4pm and just as we turned in the scooter the skies opened up and it began to rain with a vengeance. We dashed back down the road to our hotel and laughed at our good timing and narrow escape.