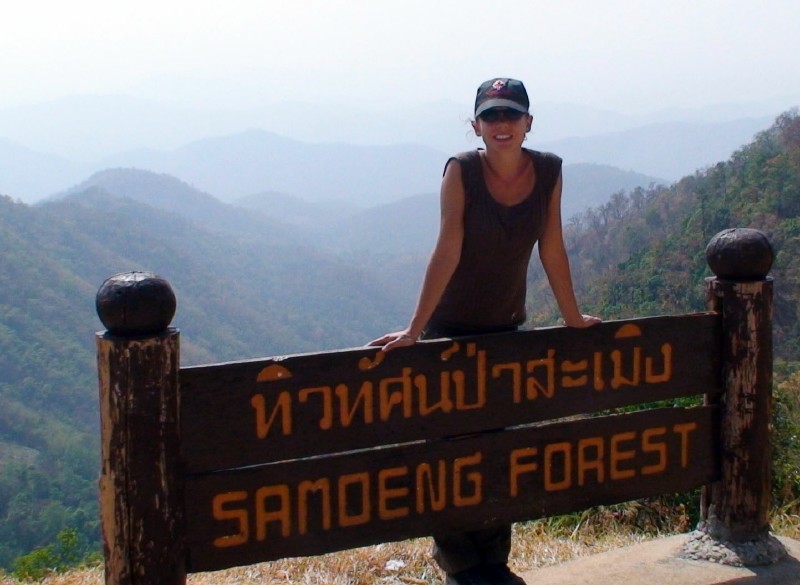 This is a quick post about a scooter ride around Chang Mai that includes photos, maps and facts. This is a self-guided cultural experience on a shoestring or in reality just a day to kill.

The Samoeng Loop, is a 100 km loop ride through the Mae Sa valley to the west of Chang Mai. For about 200 bath ($6) a detailed riding map can be found at any bookshop and for an additional 100 bath ($3) you can rent a scooter for the day. Throw in an additional 60 bat of fuel (2 liters) and you have the freedom to ride this beautiful, winding, single track road for a day (or 4 hrs if you simply want speed and curves). 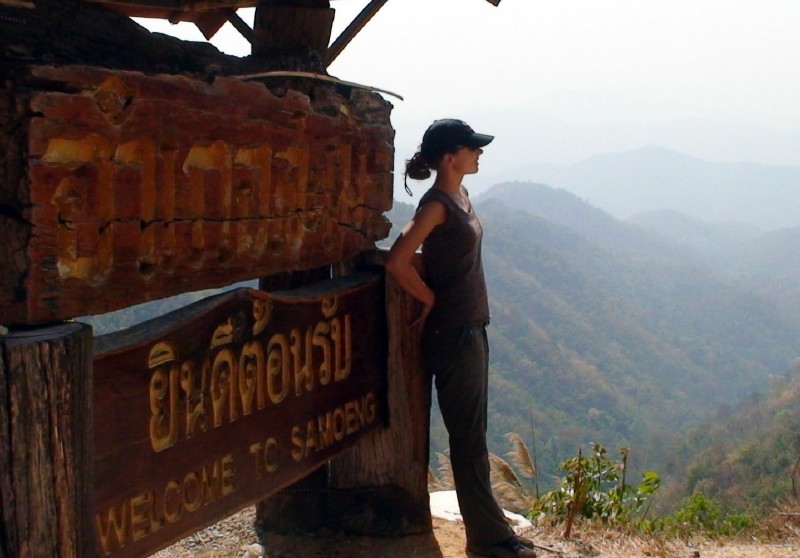 Cristina and I started out early in the morning (9am) and headed south at the road running from the southwest corner of Chang Mai’s central moat. Fairly quickly we reached the intersection at route 121 that ran east a short distance to reach the country road marked as 1269. This road is reminiscent of a country farming road in Canada. It is paved and generally marked with one lane running in each direction. It is impossible to get lost since it is the main road running around the valley and all roadside attractions (plantations, guesthouses, resorts, elephant camps, caves, waterfalls, temples, shrines, and lookouts to mention just a few) are clearly sign posted.

We spent the first half of the day (and more) lazily riding the steep winding curves, stopping to take photos, or simply being casual. Then around 1 pm we reached the cutoff marked as route 1096 and a return to Chang Mai via a northeast direction. We opted to continue straight for another 6 km to reach the sleepy town of Samoeng for a late lunch.

The town is basically an intersection with a farmer’s market, a convenience store, a bank, food stalls, and police checkpoint (no guesthouse).

After a cheap lunch (and fresh strawberries and watermelon) we got back on the scooter and double back to the 1096 turn-off and continued following the sharp turns as the road followed the ridge line between two valleys and into a drier (and burning) forest.

Much of the forest along the road (and on many of the far slopes) was burned or currently burning. It seemed that forest fires during the dry season are a comment event. In no case did we see fire fighters or any concerned locals, even when we came upon active fires burning along the side of the road.

After 10 km of steep and sharp turns we reached the bottom of the next valley and the first of a series of small towns and road side stalls.

We stopped and took more photos as the afternoon slipped away and the nature of the road changed. It began to become busier as we got closer to Chang Mai, with the presence of package tourist attractions, such as botanical gardens, elephant camps, orchid farms, snake farms, monkey shows, 4-wheel rentals, bungee jumping, native handicrafts, and more.

After many more turns and twists we reached the main highway (four lanes and lots of traffic) of route 107 leading back to Chang Mai (10km to the south) and by 5pm we were back in the moat enclosed tourist center and within a few blocks of our guesthouse.

After a day of so many turns and twists, I opted to cut across the traffic and enter an ally that ran to our guesthouse rather than take a turn to follow the one-way traffic to the right. This maneuver re-introduced me to the bureaucracy of city life as a motorcycle policeman stepped out of a hidden lane and signaled me to pull over. Clearly he was strategically located to catch people like myself who opted to simply go straight (the shortest distance between two points) He smiled, asked for my driver’s license, wrote me a 500 bath ticket ($16), and then returned to his nook to catch his next victim. I noticed that he had not returned my license so I followed him and asked for it. He instructed me to go to the local police station (showing me its location on my map), and told me to pay the fine. They would then call him by cell phone and he would ride over and return my license. I tried to pay him directly, but he refused and insisted that I had to go to his headquarters to pay my fine.

Cristina decided to walk back to the guesthouse while I went on to address my new administrative requirements. In spite of the ticket I felt that it had been a lovely day and that perhaps the ticket was simply a reminder that tourists are not excluded from the system, no matter how much we feel disconnected at times. I waved goodbye to the smiling cop as I carefully pulled out into the traffic to find the police station play my role in the game of life. 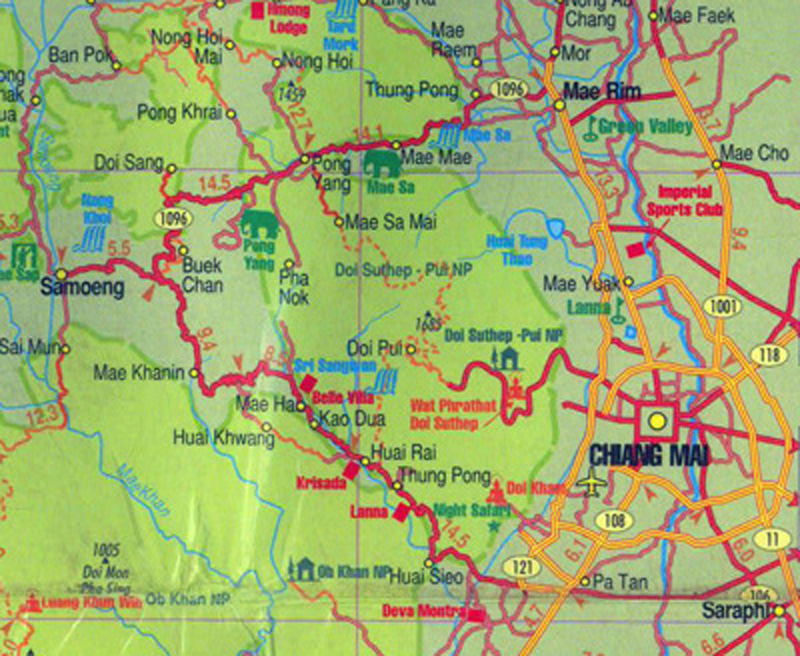