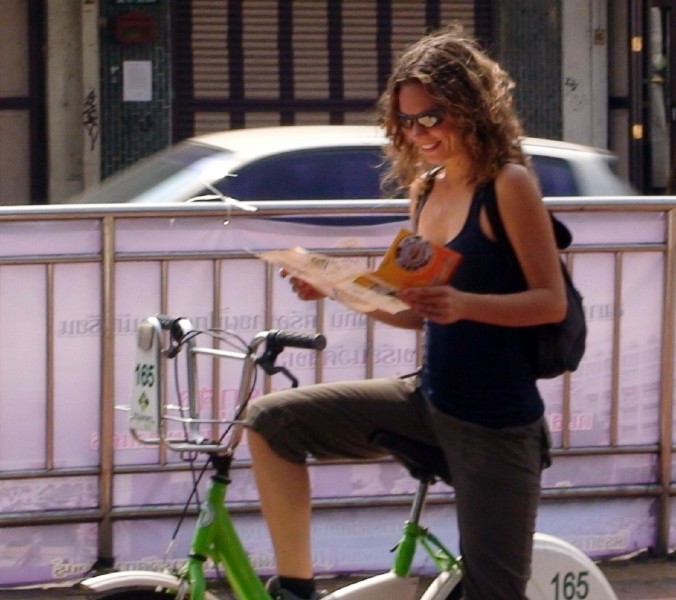 This is a quick post about a day spent cycling in Bangkok that includes photos, maps, facts and a video. This is a self-guided cultural experience on a shoestring or in reality just a day to kill.

I didn’t expect to do any kind of outdoor activity in Bangkok, so was genuinely surprised when Cristina discovered that the city offered a FREE bicycle tour option called Green Bike Bangkok. I first noticed a bicycle station in front of the Giant Swing (1784) in Rattanakosin, the historical center of town, one night. The next day Cristina (my faithful administrative assistant and tripod lackey) enquired and found out that the bicycles are offered (for up to 3 hrs, but the time limit is flexible) for free to tourists (passport used as proof) and included a small information booklet with maps, places of interests, and route outlines. She asked a few more questions in order to find out if there were any hidden strings attached. None! It was completely free. 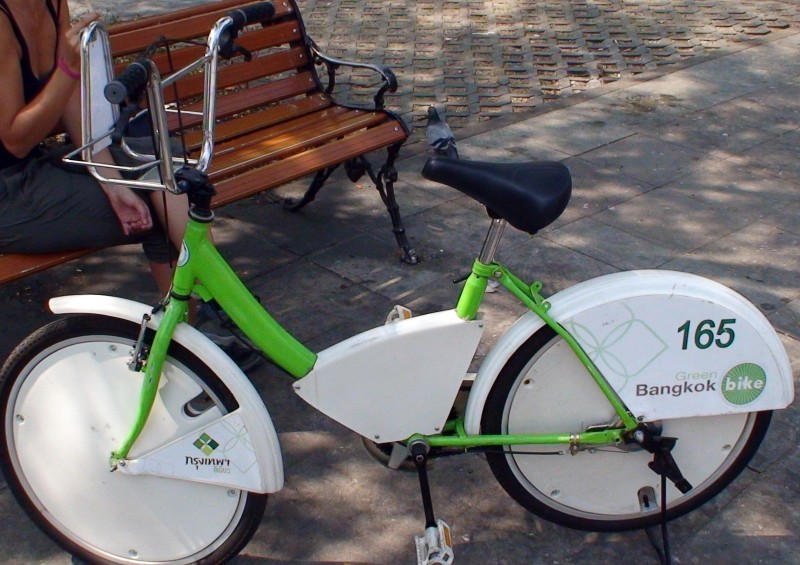 The next day around 10 am we visited a Green Bike kiosk near our guesthouse with passports in hand. The attendant at this kiosk asked for a 20 Bt fee (75 cents). We protested that it was supposed to be free and he back-peddled as though we had misunderstood his request for money.

We picked out our bikes and set off down the road following the bicycle lane markings on the pavement and the signs placed at intervals along the route.

The ride weaved in and about the entire historical center and took about 6 leisurely hours. The day was sunny, the traffic light, and the route a pleasure to follow. If I were more tourist-inclined I would have used the bike for a few more days and checked out the various places of interest that we passed (such as the, Temple of the Emerald Buddha, Grand Place, Wat Pho, the Museum, University, Khao San Road, Democracy Square , and much more), but in truth, I was happy just to cycle around and observe the various temples and monuments from the outside.

By 3pm we had finished the route and were ready for a cold Pepsi and food. We returned the bikes to the attendant and set off to find another of the many MSG infused local restaurants and an early dinner.

See below for maps & facts

We left Koh Tao on an 800 bt ($ 26) combination fast boat/bus package directly to Bangkok. The boat left at 4:30pm and trip took only 2-3 hrs (rather than the longer and cheaper night ferry) but was hell. The high seas made it feel as though we were ants clinging to a cork being tossed about in a furious sea. Practically everyone (including my assistant) was terribly sick. I wedged myself into an awkward position and went to sleep. When I awoke we were pulling into the harbor of Chumphon. With wobbly legs the passengers struggled to reach dry land.

At this stage we were moved along in conveyor fashion. Some passengers were herded onto a bus for the train station to make connections. Another group boarded a bus heading south, while the majority of us were assigned bus and seat numbers and then directed to sit in the waiting area until the scheduled departure (8:30pm). We watched a pirated copy of Batman Returns on the mounted TV while letting our stomachs settle and time to pass.

At 8:15pm we got on our VIP buses (actually comfortable and spacious) and settle down to watch a pirate copy of War Inc while the bus sped out of town and headed north.

The roads north were wide, traffic was light, and we made good time as we nodded off after the movie. The bus stopped around 2am for a toilet and food break. Shortly thereafter we entered the outskirts of Bangkok and the highway became a maze of highways, over-passes, and exits. I was impressed with the roads, layout, and drive.

At 3:30 am (1 1/2 hrs early) we pulled around Democracy Square, and up to a non-descript bus stop with the usual host of Taxi and Tok-Tok drivers. We had been promised that the bus would stop near or on Khao San Road (the mythical gateway through Bangkok and SE Asia) but I saw no sign of it so we grabbed our gear and walked back the way the bus had come to an All-night McDonalds restaurant I had spotted on the drive in. We ordered some junk food and settled into a booth to wait for sunrise.

Around 5:30 am we ventured out and found our way to a quiet area north of Khao San Road, that we had been told, contained many cheap guesthouses. We inquired at a few places that were full and wanted us to wait until 10am and then found the peculiar Bamboo Guest House that provided a spacious double room for 250 Bt per night (shared cold water showers and toilets). We accepted and crashed for the morning.

This place is run by an old family with some strange old people rules. Most notably the no-shoes upstairs rule. Even though we had our own inside slippers the owner refused to let us wear them, even in the toilets and showers.  Who is going to walk around shared bathrooms barefoot?

On the plus side, the rooms were large, a key to the outside gate was provided so that there was no curfew, and best of all, they will leave a hidden room key for you if you know you are arriving late or early (if you have stayed there previously). This is very handy since most of the arriving transport arrives at the middle night/morning hours to avoid the city traffic.

This bike ride took place in 2009. I have been told that the bikes are no longer free but have not confirmed this fact. 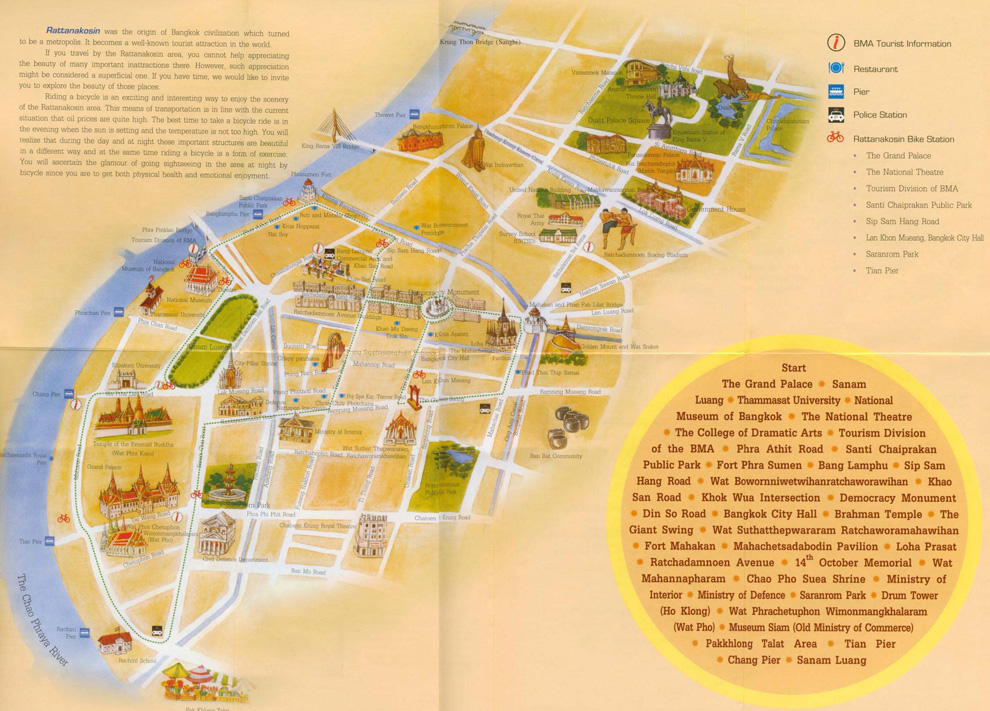 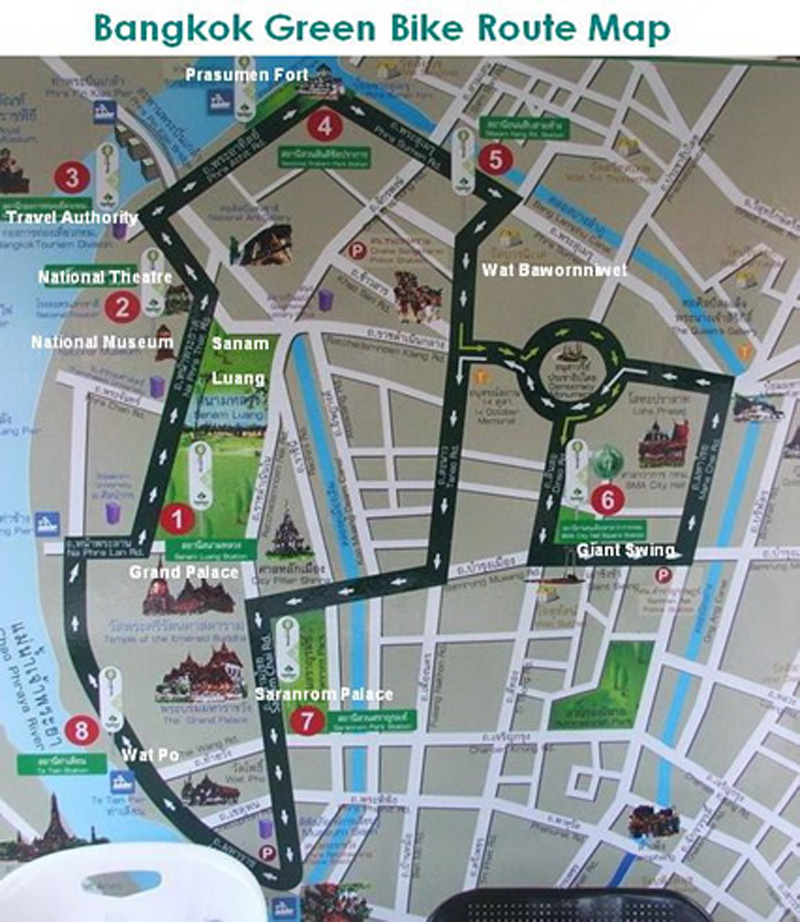 Link back to Fun & Sun on Koh Tao post