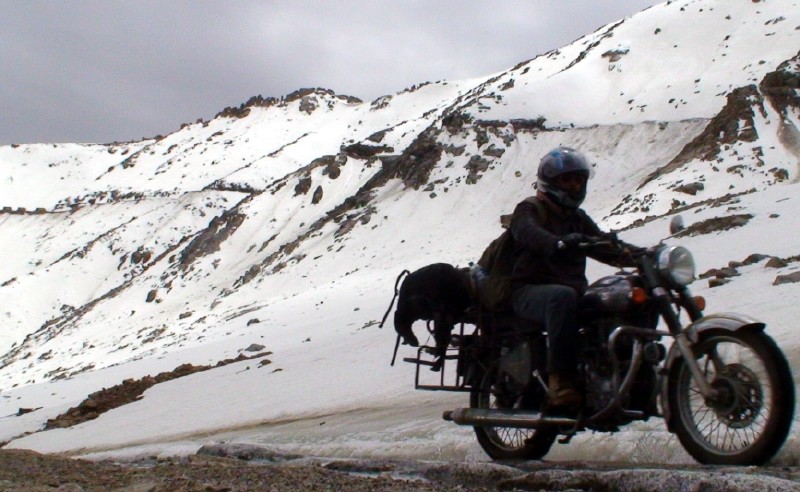 While eating a savory roasted chicken plate, I wondered if perhaps today I would finish my meal without having to concede to another outing, especially since Cristina and I were even. I had previously agreed to her Lamayuru request and then she had agreed to my failed attempt at trekking into the Nubra Valley. I could see that it was not to be so as Cristina joined me. I kept my gaze focused on my meal and tried to enjoy the sound of the stream that had just started to run noisily a few meters from our table.

The sun was setting and I was happy to be back in Leh, with a comfortable bed and good food within easy reach. Cristina on the other hand wanted to squeeze in one more tourist destination before we turned tail and headed south in a few days. Her opening gambit was that it was a shame that we had failed to reach the Nubra Valley on foot, especially since we had already paid for the permits. It was my Achilles Heal and she knew it. I hated to waste money. We had a permit that had cost me 250 Rs ($5) and it was good for a few more days. She then pitched her plan. We could rent a motorbike, take only a day pack, cross the highest motorable pass in the world (5,606m), and then explore the area by heading west to reach the last town in valley (Hunder). I didn’t even bother to put up a fight. I simply caved in and agreed to leave after breakfast (which she insisted had to include fresh Apple Crumble Pie).

Early the next morning Cristina packed while I went to the bike shop and rented an un-respectable Pulsar 150cc bike for 400 Rs (($8) per day. I then topped up the tank and returned to the guesthouse to collect her and head to a new breakfast/bakery that we had recently added to our list of favorite haunts. After a leisurely breakfast we rode thru town to the circle road that passed the Leh Palace and then headed north.

The ride for the next 40km was all up a curving paved road that was scenic and a wonder to ride. It then became hard and the pavement all but vanished as the road reached the snowline, just above the checkpoint, and then began to fishtail up the steep face of the Ladakh Mountain Range. Even though it was late in June, there was still snow on the pass and the approaches, with numerous stretches covered in running water from the melting snow. It was clear that it was an impossible task to keep the road serviced at this altitude. It was in fact so difficult to keep the road functional that it was only open for a few months during the summer and even then bus traffic in each direction was restricted to alternate days of the week (Monday, Wednesday, and Friday for northbound, and Tuesday, Thursday, and Saturday for southbound).

Cost of this Ride is $

Our slow ride up the face gave us plenty of time to stop and enjoy the views and marvel at all the mountain bike riders descending from the direction of the pass. As we got closer to the pass we spotted some remains of trucks that had tumbled off the road in the past. Clearly the Indian penchant for speed and passing persisted even at these heights. We then slowed to let to state buses pass and then continued to crawl towards the pass on our gutless motorbike.

At the Khardung La Pass we stopped to take photos, stare in wonder at the two exposed valleys (the Nubra to the north and the Indus to the south). We also discovered the source of all the mountain bikes as a van pulled up with eight bikes strapped to the roof and tourists pilled out. Clearly someone was running a successful package from Leh that include an easy ride to the pass and then an exhilarating decent by mountain bike. I made a mental note to add it to my future list of activities. It was bitingly cold at the pass so we didn’t linger for long. We each had on our cold weather gear that we had purchased for the previous Nubra trek, but it was still too cold to hang around.

The ride down into Nubra was even slower than our ascent to the pass because the north face was covered in even more snow. As a result huge sections of the road were submerged in running water or the condition of the road resembled the bottom of a stony riverbed. Once we dropped below the snowline however, the road improved and so that we picked up speed and began to enjoy the ever curving and winding road.

The sun was shining, the valleys resembled an eerie moonscape, and yet narrow bands along the river were rich in greens and foliage. I couldn’t help but stop repeatedly to take photos. Everywhere I looked I saw unique landscapes that I felt compelled to photograph until Cristina reminded me that we were not even half way to our destination. From that point on I stopped to take photos with a little more discipline, i.e., every 30 minutes or so.

Our first scheduled stop after the pass was the village of Khardung, a dry dusty spot with Tibetan style homes and a few tea stalls along the main road. We stopped at a lonely one that seemed in need of business. The proprietor was very pleased to have us as we examined her wares, which included Pepsi, a few small bags of potato chips, some cookies, and chai . We were hungry and made eating motions where upon she took us to the back of the shack and showed us a pack of dry soup. We agreed to two bowls, a Pepsi, and a bag of chips.

The soup turned out to be acceptable, the Pepsi was cold and the proprietor sat and stared at us with a broad grin as locals passed and glanced at us shyly. When it came time to pay the bill it became clear that the woman either couldn’t count or couldn’t convey the price in English. We handed over 70 Rs (the price we estimated) and she gave us back 10 Rs as change. She seemed happy and proud to have served two tourists and we were just as happy to have provided some distraction in what was clearly a dull and labor-intensive life.

We hopped back onto the bike, already sweating, and continued down the road towards the village of Khalsar, located at the confluence of the Skyok and Nubra rivers. The road wound and undulated in a gentle fashion, until it began the drop to Khalsar. The village was less picturesque and served primarily as a rest stop on the road, so we breezed through without a backwards glance. The road then turned to hug the Shyok River on its downstream journey to join the Indus somewhere in the restricted no-man’s land that is neither India nor Pakistan. The riverbed was a wide, lazy, sandy expanse that had carved its way through the hard, dry landscape over many eons. Since all of Ladakh is an arid landscape the river’s volume must have changed based on each year’s unpredictable summer ice melts. As a result the vast riverbed remained untamed and free to pick its direction at will and the road followed the bank with either a vertical rock cliff or a long sand slide as its shoulder. We were riding on a road that lead to a dead end (restricted zone) and remained open only at the whim of nature, not the demands of man.

The next marked spot was Deskit, listed as a place with many facilities and a major gompa. Rather than stop at the guidebook suggested location, we opted for a visit to the monastery and then continued in the direction of Hunder, the last village open to the public.

The next stretch of road was noted for the sand dunes that became evident as the wind picked up and we road into a full-fledged sand storm. Cristina huddled behind me while I squinted at the road and repeatedly spit out sand. Small dunes were forming across the road and the ride became more interesting, at least for me. We eventually ran out of road altogether at a checkpoint where stern soldier informed us that the road was closed to civilian traffic and that the village of Hunder was to our right, but only accessed by a turn off a from few km back that runs into a number of army bases. We accepted the unsmiling soldier’s directions and doubled back.

At the turnoff we waved to the many locals squatting along the roadside, in hopes of a ride, and entered a flat area that was clearly part of the riverbed. We rode along reading the colorful signs for guesthouses and camping areas until we spotted a small farmhouse with a new guesthouse building in its yard.

A quick negotiation ensued and we moved into a lovely room with hot water and new furniture. We assumed that we were the only customers so agreed easily to a price of 300Rs ($6) and then went for a long walk.

Walking thru the village was like being in a fairy tale village. Small open canals ran in all directions, farm houses with colorful gardens abounded, trees were planted along every trail, birds sang without letup, prayer wheels, and Manny Walls were scattered about, the small shops housed simple goods, many smiling locals, the surrounding mountains were surreal, and no path followed a strait line and we were semi-lost most of the time. By the time we returned to the guesthouse it was already dark and we were tired and hungry.

However, we would have to wait a while for dinner. It turned out that the guesthouse was not empty. In fact we had gotten the last room, and even the rooms in the farmhouse were occupied. We accepted our fate, made friends with two Israelis and enjoyed the lovely evening as the full moon rose above an abandoned gompa sitting on the crest of a mountain slope.

The next morning we got up early, waved farewell to our host family and rode back towards Deskit to visit the 500 year-old gompa, situated on the high riverside slopes, overlooking the riverbed village and a giant Buddha statue under construction. The gompa turned out to be fascinating with amazing views, and a peaceful feeling. Our stop at the gompa lasted much longer than we had planned and were finally driven out by our hunger. We returned to the village of Deskit for a comfortable rooftop lunch and cold Pepsi.

After lunch I was tired and sleepy, so crawled back onto the bike to wake up and retrace our route to Leh. The return ride was just as enjoyable with numerous new photo opportunities since this time I was facing in the opposite direction. At the pass we rested and then I let the bike coast all the way back to Leh, simply leaving it in neutral and using the break to slow our descent. It was a 60 km winding drop that was both tiring and exhilarating at the same time. We reached Leh just as the sun was setting, returned the bike, dumped out daypack, and then hurried to our favorite restaurant for a rewarding meal.