Overland Australia – Noosa Everglades Canoe trip is a recap of a package canoe trip I did. I provide details that include maps, costs, logistical requirements and facts as well as links to additional details and photos. This is a self-guided adventure on a shoestring. Follow the links to dig deeper into the adventure.

The Noosa Everglades are a micro environment that replicates the wonders and pristine emptiness of Florida’s million-plus acres of swamp and wetlands. However, Noosa’s rustic environment lacks the menacing alligators and blood sucking mosquitoes that make the North American swampland so very uninviting.

I signed up for this 3 day, 2 night package with Peter Pan Travel. They gave us all the details, collected our money, gave us vouchers and trip dates and then sent us on our way. 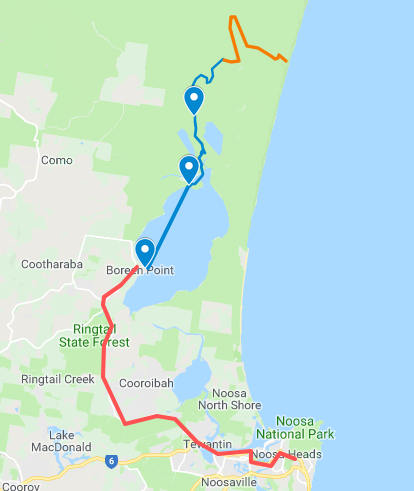 Our first task that evening was to buy supplies. Running out of food and drink simply takes the fun out of an experience, so we shopped wisely for food, munchies, drink and booze. Then we purchases some more booze to be safe.

At 8:15 the following morning we were collected at the Koala’s Hostel by a real Aussie bus driver who had a dry wit, and enjoyed telling us horror stories about the Australian Everglades. He also mixed in some local folklore and nature facts.

The shuttle bus continued to pick up additional people before finally heading towards our departure point, lovely Lake Cootharaba.  We disembarked the bus at Boreen Point to unload our copious supplies. We looked as though we were going on a multi-week expedition rather than a leisurely three day canoe trip.

The serious business began when our boat captain began going over the equipment, maps, landmarks and rules. It all seemed pretty straight forward and few questions were asked. He was only shuttling us across the lake and then we would be on our own. Things were looking up in my book.

We packed all our valuable gear into water tight plastic drums and then waded into the cold blue water to load and board the two waiting water taxis for a pleasant and uneventful crossing the lake to the Kinaba Information Center. The captain, and his tiny assistant proved as entertaining and amiable as the bus driver.

Upon reaching the Kinaba, on the far shore, we were directed to our waiting canoes and paired up voluntarily, with the remainder arbitrarily assigned. I say arbitrarily because fate’s fickle hand created some canoe teams with strong experience and others with none at all. It was quite funny to watch the hapless struggles between the paddles and the river.

After a smidgen of further instruction  we were directed to paddle up the serene Kin Kin Creek for a few kilometers in order to get acquainted with the canoes and the elements. We were to paddle to a foot bridge and then return to Kinaba in order to begin the real canoe trip.

Our group consisted of five canoes and twelve paddlers. We made our way up and back down the river over the next two hours. It was the simplest and the prettiest of settings and an ideal place to learn the art of basic canoeing.

Upon returning to Kinaba Center we regrouped and then set off around the north side of Kinaba Island to cross Fig Tree Lake with considerably more confidence. Mild winds kicked up some small whitecaps that caused some consternation and a lot of zigzagging by our less experienced crews.

But eventually we all made it across the lake and to the mouth of the Noosa River. Here we found the provided maps to be less than stellar, but with a bit of trial and error we ferreted out the correct course. Once the main river was gained, it was smooth sailing, so to speak. The weather was glorious and the vistas were stunning.

Our team’s canoes eventually began to reach the appointed camp site, Harry’s Hut; in a haphazard fashion. We could see the other groups in the area, but were spaced out far enough that we felt adequately isolated.

An initial survey of the camp turned up no sign of Harry’s actual hut but the place did fit the description of our destination. It was a standard government maintained campground. There were biodegradable toilets and a single tiny wash basin, but no showers or hot water. A pit contained an ample supply of fire wood. This abundance of fire wood would turn out to be our most cherished and most cursed source of comfort over the next few evenings.

Our tents were the large and spacious type that a family typically uses in a backyard setting; not the tiny lightweight models I usually would use in the woods. While the tents were opulent, the provided bed rolls were remarkably inadequate for the task. Those few who were smart enough grabbed several, rather than a single one each back when we were provisioning. They were compressed from years of continuous use and provided about a sixteenth of an inch of foam (half a centimeter I think). A minor inconvenience so to speak.

It was then late enough in the day to begin the tedious and hilarious task of making the fire and preparing dinner and drinks. As the liquid hours passed, the night grew colder and the fire higher. The lowest temperature measured on my mini compass-thermometer read 4 degrees Celsius. We took turns disappearing into the darkness to fetch wood at a more frequent pace as the temperature plunged.

At first light, or sometime around that unholy hour Wallabies visited the camp. I naturally slept through the visitation, but am assured that it did take place. My headache that morning cared very little for Wallabies.

After a time we were all roused and fed. Around 11:00 we then packed the day’s provisions and set off for a six mile paddle upstream to Campsite #3; the trail head leading to the sandpit.

The paddling to the trail head camp was easy going, especially in our sluggish states. We found it easily, banked the canoes, and began the long walk uphill. The trail was well marked and wide enough for easy single file hiking. It wound upward at a steady pace among a forest of Eucalyptus trees filled with ruckus birds and ample wildlife, including tree lizards.

The environment had changed from ocean beachfront, to lake country, to swampy Everglades, to lazy southern river country, and then hilly gum tree forest in successions over the past two days. We were in store for one more remarkable change though.

Cresting the final rise the trees dropped away to a vast white sand desert. It was stunning! We spent the rest of the day playing in the sand dunes before finally taking time out to explore the far reaches of the pit. It extended to the ocean on its far eastern boundary. Exhausted, sun dried and out of time, we reluctantly gathered our gear and set off to retrace our hike to the canoes. The paddle back to camp was unhurried (the slow down stream current added a bit additional thrust).

Returning to camp we set about accomplishing the same tasks as the prior evening (making dinner, and partying), but this time with a bit more efficiency. But this time our wood supply was a serious issue. We had exhausted the bulk of the wood the previous evening and this night looked as though it would be another cold one.

We compensated for the dwindling wood supply by sitting in an ever tighter, and friendlier, circle about the fire and spiking our blood supply with antifreeze.

The next, and final, morning of the trip we woke late to high winds and skittering clouds. Listlessly we broke camp and began the paddle down steam to the mouth of the river. The paddling was a chore due to the strong head wind. We reached the Kinaba Center at 2 P.M. for our taxi ride back to the creature comforts of a hostel dorm room.

The lake crossing was a bit tedious due to the head wind, but by this time our team was a seasoned and well lubricated machine, even though our energy supplies were running dangerously close to empty.

While unpacking our gear we noticed the next group heading out. They were so full of energy and fortitude. I took note of the contrast between the enthusiastic new group, compared to the weary and our hung over departing group.

Harry’s Hut had taken the steam out of our group and it would undoubtedly do the same to this next group of enthusiasts. I couldn’t help smiling to myself and wondering how many times this scene had repeated itself time, and time again.