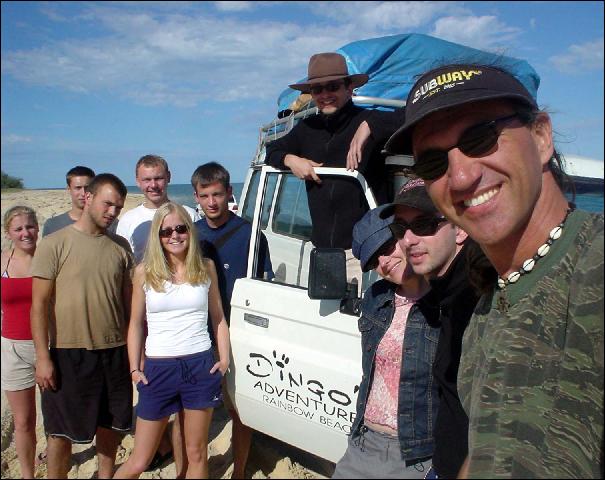 Overland Australia – 4×4 Fraser Island is a recap of a package self-drive backpacker tour. I provide details that include maps, costs, logistical requirements and facts as well as links to additional details and photos. This is a self-guided adventure on a shoestring. Follow the links to dig deeper into the adventure.

This is an organized self-drive package that puts around around 10 people into a 4×4 Toyota Land Cruiser with limited instructions, a minimal amount of skills and large quantities of alcohol. A combination that assures fun, adventure and blurred memories.

We organized the trip though Peter Pan travel. They setup the details and dates. It was up to us to reach the assembly area (Dingo’s Adventure Resort (hostel) at Rainbow Beach) one day before package start.

At Dingo’s we met up with other members of our team (there were quite a few teams), were given item checklists (which included booze checklists) and instructions in 4×4 driving, car care and island rules. 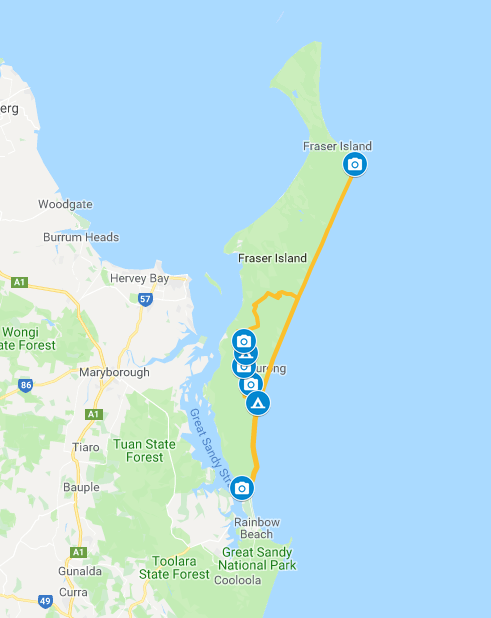 On the day of departure we were given final instructions and then loaded ourselves into the car and the designated driver (me) set out for the ferry port. We were ushered onto and off the ferry by a crew that had seen it all and were still good natured.

Once on the beach we were free to follow a ruff plan that would put teams in specific camp grounds on each night without having us all stack up at the same spots.

The driving was fun but not overly complicated. Sand or dirt tracks or beach drives. The routes were well marked. Our first side trip was to Lake Boomanjin and then we were off for lunch at Lake Birrabeen. After lunch we continued our driving/sight seeing to reach Central Station campground by late afternoon. We then returned to Dilli Village campground that had NO noise restrictions (AKA all night party) for the night.

The next day we drove to Indian Head to see a wreck and watch the sharks. We then spent the mid-day at the Wongi Sand Blow for fun and a nap. That night we stayed at Indian Head Camp via the inland track (8 hours of driving) for more fun and another late night.

The third and final day we visited Lake Mackenzie (lovely and cold) for some swimming before driving back to the ferry pickup spot.

Back on the mainland we had to endure our hangovers while refilling the fuel tank, unloading the car, doing inventory and cleaning everything. Fun has a price.

We then spent an additional two nights at Dingo’s to recover.