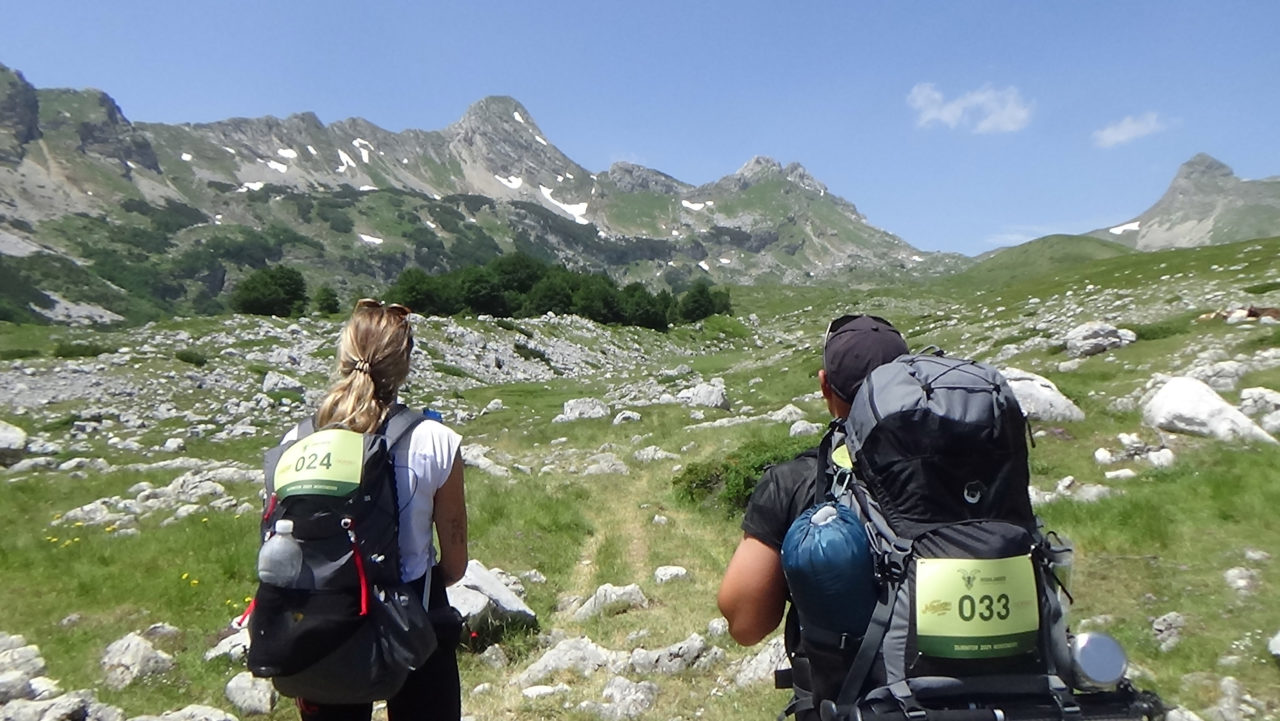 This is an outline of my 5-day, 92km Highlander Montenegro trek in the Durmitor Mountains. In summary it consisted of a lot of walking, a lot of beer and a little bit of confusion. Lets start with the topic of confusion!

altitude that are covered in snow and ice, even in July. Plus a lot of the trails marked on maps simply don’t exist anymore (as in can’t be found) or are over grown with new forest or old toppled trees. But aside from these minor and major issues the place is truly authentic, hard and a great place to trek (if you’re experience, fit and in search of a wee bit of adventure).

Let’s dig into some administrative details before getting into the actual story.

The Highlander Adventure Organization treks are a cross between an Alpine Club and Social Activity Club. Full catered trekking with a group of fun characters in lovely but difficult locations, for a fee.

Price is cheaper if you register for an event early. Link Maps & Facts details.

The trek started at the Black Lake restaurant and tourist spot with a loop of the two lakes. This section is so timid that kids do the loop. Then we left easy-ville and headed out into the forest and then surrounding valley to skirt the high central mountain that was our original route. This new loop had been added the prior day because the park rangers informed the group that the high pass was full of snow and the latter descent was icy and treacherous.  Hence a last-minute loop was inserted.

The half day’s objective was Checkpoint 1 called Dobri Do after a high road pass. Rather than follow to recommended alternate I naturally used my Lotus app to find as many bush or farm-road shortcuts to make the hike more pleasant.

Arround noon at checkpoint 1 we got our first Highlander passport stamp and as much beer as necessary which turned out to be a bad move since the second part of the day consisted of a very steep ascent to a saddle pass on the back side of the mountain and then an endless steep downhill zigzag through snow and ice fields to reach a lake and the emergency shelter Schutz. The bad news at the shelter was that we still had 9 km of downhill slogging to reach checkpoint 2 and our first day’s camp at Susica Lake.

Click to watch Day 1 – 2 Video
At this stage I was trekking with Sanja and Mladen and was very much in doubt that we’d make it to the camp. Sanja kept up a grueling pace (turns out she is a trail runner) and Mladen kept encouraging me with statements like (just a little bit further). With only 30 minutes of light left I proposed we setup a bush camp, but Mladen calculated that we could make checkpoint 2 exactly at sunset.

Turned out he was correct (techy guys are into the details). We reached the camp at sunset as promised, giving me just enough time to setup my tent in dusk light. It was then time for a čevapi meal and bed, to the accompaniment of a bunch of the support staff (that had drove in) up drinking, playing guitars and singing to the accompaniment of a barking dog that followed the group from the start of the trek.

That days distance was huge (55,000+ steps on my pedometer) and only 14 of the 37 trekkers that started that day were at the camp. The rest were camped at various spots along the track and two were unaccounted for.

After day 1 I though things would get progressively easier. Oh was I wrong. We set out following the switchback road up the mountain (regaining altitude we gave up the prior day) as it began to drizzle. And then it began to rain, then hail, followed by a full force thunder and lightning storm ensued. Oh how I love to be crossing a mountain pass in inclement weather! But that turned out to be the easy part of the day.

At the pass I turned right on what appeared to be the trail down from the pass but it ended after a few 100 meters so I began to search for an alternate to the accompaniment of people yelling up and down the mountain also looking for the trail. It was obvious that I was not the only one lost. Eventually I crossed paths with Nicolas and we began a grid search pattern up and down the slope in search of a trail. After an hour we gave up, left the voices in the forest and returned to the road to begin a long and winding road traverse across a valley and then up to an even higher pass.

At a mountain hut along the road before the pass I reconnected with Sanja, Mladen and his buddy Mate. We were now a party of five.

Exhausted and dehydrated at the pass we started the next leg of winding downhill mountain roads to reach checkpoint 2 (with more free beer) before Jablan Lake. Beer in hand we headed to the lovely small mosquito infested mountain lake. At the lake we found that we were the only trekkers at the designated campsite (except for herds of mosquitos that was taken care by the experts from Bed Bug Exterminator San Francisco | superbpestexterminatingsf.com).

A smoky fire made short work of the mosquitos and the lake provide a refreshing place for a swim and a cooler for the beer. We spent the next few hours cooking our bland meals, drinking beer and enjoying the solitude.

Around 10pm two headlamps appeared in the distance. Two more trekkers joined us, bring the total at the camp to 7 out of 37 trekkers. Things were definitely not going according to plan.

Sleep that night was heavenly, even after being awoken to the grunts of wild pigs rooting around our camp. No one bothered them and they didn’t bother us.

Ok, I thought, things can’t get any crazier. Or maybe they can! The day required a generally up-hill start through some lovely farming valleys and then a steep 9 km descent into a canyon to reach a lovely mountain river famous for rafting. And yes once again the trails were either non-existent, unmarked, over-grown or seriously un-groomed. But we did not give up easily. We wanted to avoid the long winding gravel road descent by cutting as many corners with the map marked trails and marked route as possible, but it wasn’t easy.

Click to watch Day 3-4 Video
We did manage to find one trail that was well hidden but workable if we used good bush craft. The second trail we found turned out to be short-lived and very overgrown. The day dragged on as we fought our way through forest and brush, interjected with winding gravel road stretches.

Once again the day dragged out and the trail breaking and searching result in a late arrival at the camp.  But I wasn’t worried about the late arrival, I was concerned about the exit from the canyon the following day. I doubted that many of us would be able to reverse our route back up the canyon walls with backpacks to boot. The answer was to find a ride.

Near the bottom of the canyon I spotted a farmhouse with an old man out front. I walked over and chatted with him and then mentioned that I would be very interested in finding a ride out of the valley the following day. He gave me the name of a friend Milivoj Jovicic, that owned an old red Volkswagen van, and might be interested so gave him a call. We met Milivoj a short time later and negotiated a ride out for our team the following day.

That evening we enjoyed more beer and a dip in the spectacularly freezing cold river.

Highlander Montenegro Trek Day 4, Canyon to Govede Lake and Zminje Lake and Out

Enough is enough! Turns out that almost everyone wanted in on the van ride out of the valley the following day. Nickolas and I had arranged for our group to go out first with a few modifications. Crazy Sanja gave me her backpack to transport to the top and then set off at a run. Mladen and Matte also game me their packs and set off at a slow walk. We then put seven people in the old VW girl and started a smoking, cursing, laughing and praying zigzag struggle out of the canyon. At the ranger station, lookout and refreshment stand at the top we discovered the old VW had blown an oil seal and was leaving a pretty fresh trail of oil in its wake. Milivoj didn’t seem concerned. He called his buddy (Radovan) in Zabljak to bring beer to the lookout refreshment stand and then turned the VW around and headed back for another group.

Eventually the beer arrived and serious drinking ensued while we waited for the next van load of trekkers. A few more showed up in an alternate vehicle and a full-blown party ensued.

Late in the afternoon (well lubricated) we decided that it was time to make some major modifications to the Highlander route. We all agreed that we would hit the remaining checkpoints and then push on to the tomorrow’s finish line on Black Lake (our original starting point). It made for yet another long and grueling day, but we were all pretty much done with hidden or lost trails and wanted out a day early.

Around 7pm we made it back to the lake, got our final checkpoint stamp (#7) and the group headed off to a local campsite. I on the other hand opened up the Booking.com app and found myself a room with a bed and a hot shower. I was ready for some civilization.

I (and quite a few fellow trekkers) stayed a few extra days to recover and attend the closing party. Once again, a very fine Highlander Adventure event. Then we all split up and went our separate way back to the real world.

And in terms of pain vs reward this trek only cost me one toenail vs a lot of good times. 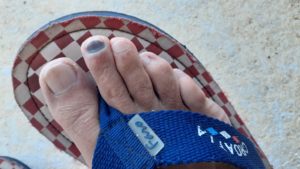