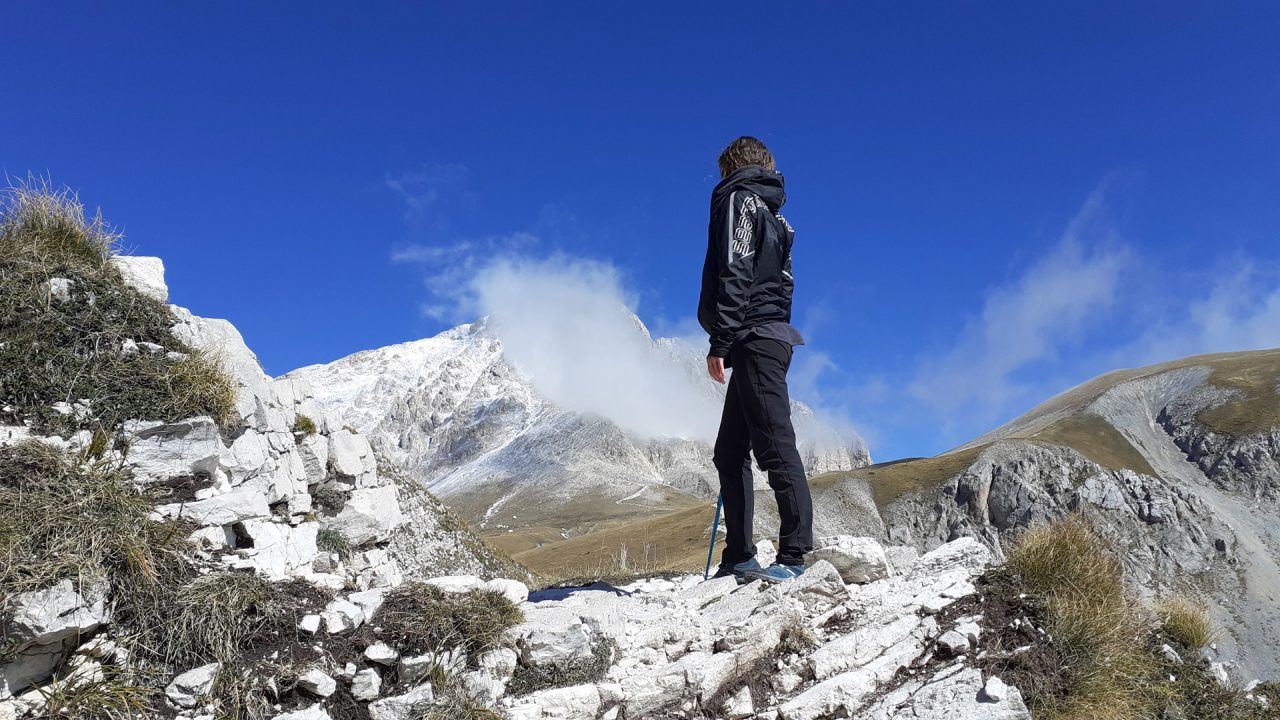 This is a quick post about how I visited Corno Grande Again. This time in a very round-about way and then ultimately only to visit the cave that gave me shelter the night of the storm. This is a self-guided vacation romp with a few hikes on a shoestring. Follow the links to dig deeper into the adventure.

This Italian hike starts in Pompeii, not for the ruins, but for Vesuvius Volcano. But due to COVID-19, access to the summit is by advance appointment only. So we head to Matera, a very old and unusual town.  It’s inhabitants lived in local caves up until the 1970’s so the caves became our next objective.

Matera is the capital of the province of Matera, its original settlement lies in two canyons carved by the Gravina River. This area, the Sassi di Matera, is a complex of cave dwellings carved into the ancient river canyon, often cited as “one of the oldest continuously inhabited cities in the world.

By the late 1800s, Matera’s cave dwellings became noted for intractable poverty, poor sanitation, meager working conditions, and rampant disease. Evacuated in 1952, the population was relocated to modern housing, and the Sassi (Italian for “stones”) lay abandoned until the 1980s. Renewed vision and investment led to the cave dwellings becoming a noted historic tourism destination, with hotels, small museums and restaurants – and a vibrant arts community.

We decided to hike and explore some of those caves. That hike reminded me of the cave, on Corno Grande, that I spent a night in for shelter, back in 2007. The Corno Grande cave became the new plan.

No NP Gran Sasso fees. Park at the base of the gondola for a ride up to Campo Imperatore (there is a fee) but I’ve never been there when it was running. Or drive up to Campo. Free parking. Three is a hostel, bar and a few outdoor vendors there most (but not all) of the year.

But first we visited Polignano a Mare and Vieste to see their seaside caves.

Polignano a Mare is a town in southern Italy, located on the Adriatic Sea. The local economy mostly depends on tourism, agriculture and fishing. There a countless seaside caves along the coast and under the town foundations. You can visit them by boat, swimming, kayak or paddle board.

Vieste is a town in the Apulia region of southeast Italy. A marine resort in Gargano. There a many seaside caves along the coast and under the town foundations. You can visit them by boat, swimming, kayak or paddle board.

The area is included in the Gargano National Park. We went hiking in the beautiful National Park, but I did not include the details in the video. It is definitely worth a day trip.

Then we return to L’Aquila (which is still recovering from the 2009 earthquake. Rather than sleeping the old abandoned gondola building (or cave ;-), I opted for the more comfortable (and reasonably priced) Via Roma B&B in old L’Aquila.

L’Aquila (meaning “The Eagle”) is a city and comune in central Italy. It is the capital city of both the Abruzzo region and of the Province of L’Aquila. L’Aquila sits upon a hillside in the middle of a narrow valley; tall snow-capped mountains of the Gran Sasso massif flank the town. A maze of narrow streets, lined with Baroque and Renaissance buildings and churches, open onto elegant piazzas.

Earthquakes mark the history of L’Aquila, as the city is situated partially on an ancient lake-bed that amplifies seismic activity. On April 6, 2009, an earthquake of 6.3 magnitude struck central Italy with its epicenter near L’Aquila. As a result 308 people were killed, and approximately 1,500 people were injured. Twenty of the victims were children and around 65,000 people were made homeless.

After exploring the city and waiting for a rare sunny day, we drove up to Campo Imperatore, in the NP Gran Sasso. And yes, the gondola was not running. From Campo we made our way to the foot of Corno Grande and then east along the ferrata cables to crawl back into that life saving cave. Watch the video for details.