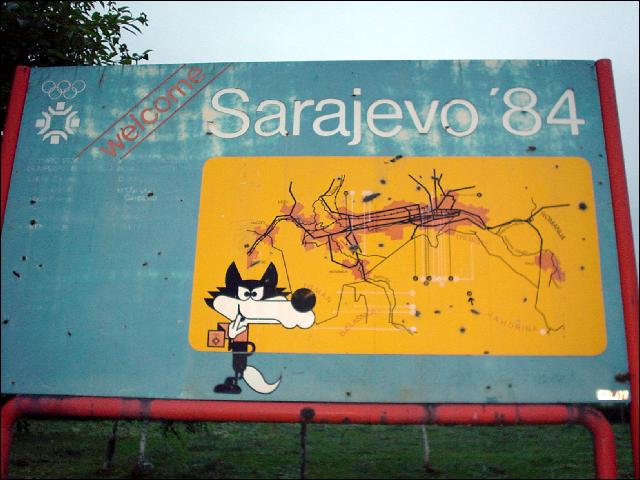 On lazy day in Croatia I was reading War Junkie, by Jon Steele, and was fascinated by a powerful chapter about Siege of Sarajevo. The siege of Sarajevo took place some ten years prior to my reading this chapter and made me wonder about a visit to post war Sarajevo. I wondered how the city and the citizens had rebuilt their town and their lives after such bloody and horrific times. I pulled out an atlas I keep handy for such moments and found that Sarajevo was only a short distance from my peaceful Croatian island. The next day I visited the bus station in Sibenik, the largest town near the island, and found that a bus to Sarajevo left nightly at 7:30, arrived the following morning at 5:30 AM, and only cost the equivalent of $25.

A quick Google searches to discover that Canadians and Americans visiting Sarajevo, located within Bosnia & Herzegovina (or simply Bosnia to the rest of us) do not require a visa. I also found that the currency is the Convertible Mark; approximately equal to half a Euro or 75 US cents. I then searched for a hostel and found two (located side by side) in the Sarajevo old town area (I picked Satour Hostel ), across from Baseskiya (Pigeon Square). The square is a major tourist spot which trams 1 through 5 all stop.

The following day I was off, like a bucket of prawns in the sun (an Australian saying). I had packed a small day pack, caught the evening bus, took the back row of seats and slept across all five seats. I was awakened by the lack of bus engine noise and found the bus emptying quickly. I grabbed my pack and stepped off the bus to a quiet and pretty much deserted bus terminal. As I walked to the ticket area and found a tourist map taped to a window. The map showed that the train station was located to the East of the bus terminal (to your left when facing the street), next to the main post office. The tram stop is situated in front of the train station, a short 100-meter walk from the bus terminal. Unfortunately I didn’t have any Bosnian money for the tram, nor could I find a cash machine in the train station, so I opted to walk to the center of town (20-30 minutes).

It was a cool early morning and the sun was starting to make itself known as I set off. The first thing that struck me was the gray bleakness of the buildings in the area. As the light grew better I then noticed that many of them were abandoned and scared by bullet holes. Even the faded 1994 Olympics welcome billboard in front of the train station showed signs of bullet damage. As the sun rose and I followed the tram tracks towards the center of the town, I marveled at the amount of war damage still present. I had thought that the scars of the four-year siege would be healed by the time I had arrived, ten years after the war of independence had begun. But at no time was I without a view of a cemetery, a burnt out and gutted building, scared facades or mortar damaged pavement. Walking the streets at this early hour, as the locals began their morning activities or commutes, I couldn’t help feeling in awe of the people who stayed to defend their town. The history of the events felt very close and real at that moment. I determined that I would find and join a tour that would bring more of this recent history to life for me.

I followed the tram tracks along the river upstream (east) and stayed with the river while the tracks followed a different route east a few blocks just to the north of the river. Within a half hour of setting off, from the bus terminal, I had reached the old town area. Here I turned left (north) at Ulica Abadziluk Street, a tiny street next to a café (with a mosque on the opposite river bank). This tiny cobble stone street terminated at Pigeon Square. I found the tram stop on the north side of the square and then located the two hostels across the road to the left.

I had made a reservation at the Satour Hostel via the Internet and knew from the confirmation email that the reception office (really a tiny travel office) wouldn’t be open until 10 AM. Since it was around 7 AM so I found a post office to convert some money, and then continued to explore the streets until the check-in opened. While sitting in Pigeon Square I was approached by a British woman who asked if I would like to join a three-hour city war tour at no cost. She informed me that she was the producer of the BBC World program and that they were filming a feature on the city. She needed a few tourist types to add to the venue. I agreed without hesitation and followed her to a café for a short wait while a few more tourist types were found.

While waiting I met our guide, Zijad Jusufovic, and the other tourists (three Spanish, one Italian, an American and myself). Our compliment would be directed by our guide and his driver, would include one cameraman and an actor. We finished the provided drinks and then set off on the fascinating half-day Mission Impossible tour.

Curiously, not part of the tour was the location at which a young Serbian shot and killed Archduke Ferdinand and his wife in 1914. This single event that took place in Sarajevo is considered to be the event which spawned WWI, and resulted in the loss of over 37 million lives. This infamous spot was once marked but all signs of the footprints and text have since quietly disappeared from view.

While taking in the various sites one can’t help but notice that Sarajevo is surrounded by beautiful green mountains with inviting hiking trails. Unfortunately the entire area around the city is dotted with mine fields. Officials and citizens alike discourage hiking in the wilds outside of the city so I visited the BiH Mine Action Center in hopes of securing safe hiking terrain. The guard at the gate welcomed my inquiries and showed me to the offices of mapmakers. I was informed that a custom map would be created within twenty-four hours of a request. This service was available to anyone and in as much detail as required. My host then pulled up digital maps on her computer and began adjusting the area, scales and layers of objects displayed per my requests. In each case the images were covered in known or suspected mines. It became apparent that there really was no area that could be hiked at length without encountering mines. This fact was made more evident when I was informed that a soldier had inadvertently stepped on a mine the previous day.

Map of Sarajevo Mine Fields 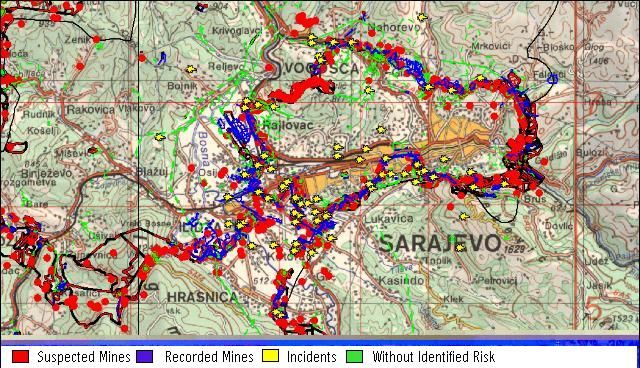 Determined, I set off on a limited hike from the east side of the city, along the river and farming roads until I reached a new bike trail that followed the river high up on the south side of a mountain. The trail ended within a few kilometers on a farm track that soon displayed mine warning signs at intervals. I gave up the hike when the warning signs began to appear on both sides of the trail and directly in front of me. My options were to continue into an area clearly marked as a minefield or turn back. I turned back with a sigh of relief. I hadn’t realized that amount of tension that the warning signs had caused me until the moment I quit the trail. My steps felt more secure as I quickly backtracked to the close streets and friendly people of Sarajevo.