This is the story (narrative) of our summit Merapi volcano Sumatra adventure.

Once again, Ulrich the German proprietor of the Rajawali Hotel, in Bukittinggi peaked my interest in another outdoor adventure by pointing out that there was a nice active volcano, a short distance from town that was easily climbed. He outlined the ‘normal’ approach of starting out in the night (in this case around 11pm) and trekking through the night in order to reach the summit around sunrise. I rejected this approach because I had already done a night ascent of another Merapi volcano (in Java) and felt that it was more important for me to have daylight in order to film than to spend the night in darkness filming with night-light settings simply to catch another sunrise. I’d filmed enough sunrises so opted for a day hike that would leave just before dawn. He informed me that it would be wise to take a guide (his wife’s daughter), in case there were park rangers about. I agreed mostly because the guide would meet us at the Hotel the following morning and therefore help us to negotiate the complicated local transportation options necessary to reach the trailhead outside of town.

The next morning we woke at 5am and headed off with the guide around 6 am. We crossed the road and jumped into the first little red van/bus that passed. We then jumped out a short while later and into another van/bus. All in all it took us only 20 minutes to reach a small village (next a cell phone tower) to the south of Bukittinggi. We found an open restaurant and struggled through our breakfast order. The guide and the cook had no idea what scrabbled eggs without rice was or simply black coffee (initially he cracked our eggs into our coffees since we had said just eggs and coffee). After an unappetizing breakfast we left the main road (around 7 am) at the foot of a cell phone tower. We then jumped into the back of a pickup truck that was going up the farm road leading to the second cell tower and the trailhead.

From the trailhead we walked along cultivated fields of tomatoes, onions, and other produce for about 40 minutes until we reached rich tropical growth. We then followed a lovely trail through overhanging exotic plants and flowers until we came to a bamboo bridge at the foot of a small waterfall. We crossed over and proceeded for another 100 m until the trail turned at the remains of a stone structure and natural camp areas.

The next three and a half hours were a long, winding, exhausting, wet, slippery, and wonderful ascent through double canopy rainforest. The trail cut deeply into the clay packed soil, across gnarled banyan tree root systems, and in places tunneled through the thick vegetation via dark black subterranean shafts. The air was damp and we sweated profusely as jungle birds chirped continuously and monkeys swung through the trees in the distance. We were perpetually in fog and mist yet from time to time a ray of sunlight would penetrate to outline spider webs and swarms of small insects that filled the languid air.

We kept up a steady ground-eating pace and pushed our not-so-healthy guide to her limits. We finally broke out of the jungle around 10:40 am. We were on an undulating expanse of lava rock, interspersed with short shrubs. Visibility was limited to around 20-50 meters due to the fog or clouds. The guide was concerned and suggested that we turn around and head back down at this stage. I took a GPS reading and informed her that we were only 500 m from the stated elevation of the summit. She explained that it would be too dark on the summit due to the clouds and that we might get lost or worse since we didn’t have flashlights. I bulked at the suggestion and pointed out that I had been taking GPS readings throughout the day and could easily find our way back, even in pitch darkness. Further I suggested that perhaps we might rise above the cloudbanks if we continued to climb. She resisted the suggestion so I simply continued on without her. Eventually she began to follow. We wound our way up the numerous rock trails that snaked up through the volcanic skree. We stopped at intervals to let the guide catch her breath and for me to watch the skyline for outlines of the crest or summit. As we ascended the wall of fog/clouds became more translucent and our surroundings became brighter. Clearly the vapor was thinning. About 100 meters from the top the wind blew away the clouds and the blue sky and the sun appeared for a few minutes. We were rising above the edge of the upper clouds at last. We picked up our pace and cleared the last crest around 11:15 am. 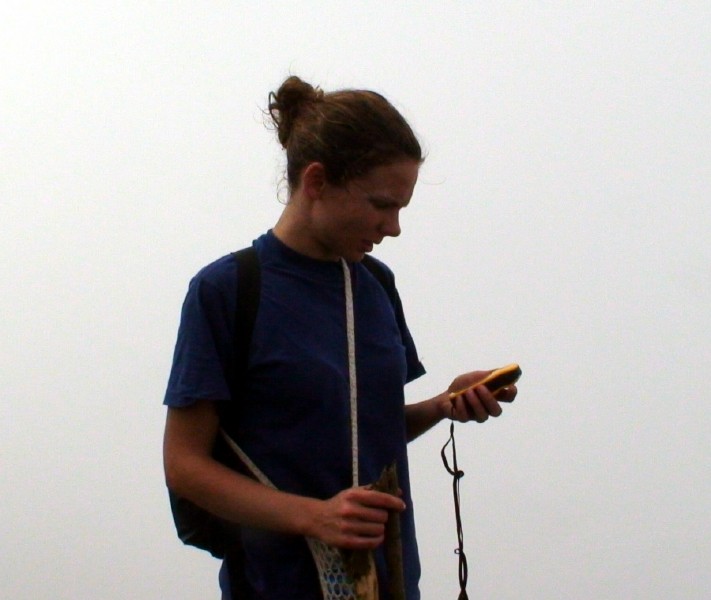 Cristina and I then left the trail to climb a small rise where we spotted a marker. We took some photos and waited for our guide to catch up. The guide’s pace picked up when she saw the crest and then we all walked easily across the flat sandy expanse to our east and towards the volcano’s cone and plume of smoke. We passed a shallow lake and a number of stone shelters (rocks piled into circular wall about a meter high). I speculated that these were either wind shelters, or more likely toilets (which Cristina confirmed by entering one to squat and deal with naturals issues).

We walked another 15 minutes to reach the outer western edge of the crater where the ground dropped down shear walls for at least 50 meters to a small flat area before another shear drop into the heart of the boiling volcano. We sat and I filmed for a while and then left the group (to the objections of Cristina who felt I was being reckless) in order to circle the open cone in a clockwise direction and get closer to a clear drop-off (reckless says, reckless is). As I made my way around the cone the air began to be thick with sulfur and rising steam. I walked along the edge as close as I might dare in order to film and take photos, but in time the footing became too hazardous and my breathing too labored. I swung the tri-pod out over the cones lip to film into the mouth of the beast one final time and then turned tail and returned to the girls where I found Cristina napping. So much for concern and trepidation.

I then sat and simply stared in wonder at the shear volume of gases escaping from the maw of the beast and considered how much carbon dioxide (not to mention outer exotic gasses) this and the other Indonesian volcanoes were spewing into the atmosphere. I wondered if Mother Nature was giving the greenhouse gasses a little help in achieving the next ice age what part we played in the scheme of things.

By 12:30pm, lost in thought and drowsy, Cristina awoke and nudged us on. We packed up our gear and began the long, sweaty, and steep descent back to civilization and the thick rain clouds that lay below the summit. Wet we had arrived and wet we would soon be again.

Return to How to Summit Merapi Volcano Sumatra post