This is the story (narrative) of our summit Merapi volcano adventure.

Someone recently called me bi-polar and I laughed, yet perhaps there is a bit of twisted truth to the statement. Just two weeks ago I was freezing my butt off in a snowstorm on the top of a frozen mountain in Italy. Then a few days ago I was sweating my butt off on the top of an active volcano in Java, Indonesia. I certainly must have some type of personality disorder if I swing from one extreme to the other in such a short period of time. But how can anyone with a serious adventure streak possibly resist such tempting objectives?

I didn’t actually know that I was interested in volcanoes or that Indonesia is the world’s most volcano centric location. But then again, I didn’t know that Nepal had so many pointy eight thousanders before I landed there many moons ago. I simply picked Indonesia as a logical starting point for my next round of travels in SE Asia and once I arrived I couldn’t help but notice the broiling temptations.

I arrived in Indonesia via Jakarta (the capital) on the large island of Java, and then took an ‘Executive’ 12 hour train to the ‘city’ of Jogjakarta (Jogja) on my way east to the island of Bali. While in Jogja I discovered an active volcano (Merapi) that was an hour north of the city. And even thought the ‘bible’ (Lonely Planet) stated that Merapi had erupted recently and that climbing it would certainly be prohibited, the local tourist office told me otherwise. They informed me that I could climb it myself or for almost the same money in bus fare I could hire a private jeep and guide. I then asked about the technical requirements of the trek and they told me that all that was required was good shoes, a headlamp or torch, and jacket for the early morning cold at altitude.

Cristina informed me that I could climb it alone or that she would accompany me if I opted for the private jeep and guide. I took option two and booked the package for that evening at a cost of 200,000 IR each ($16) even though dark rain clouds were looming to the north.

At 10pm that evening we were picked up at our Losman (guest house) by the driver, who informed us that we were the entire group and that he was taking us to a small village about an hour north. We reached Selo (a tiny village at the foot of the volcano) around midnight and drank tea and warmed up before setting off up the road towards the volcano. 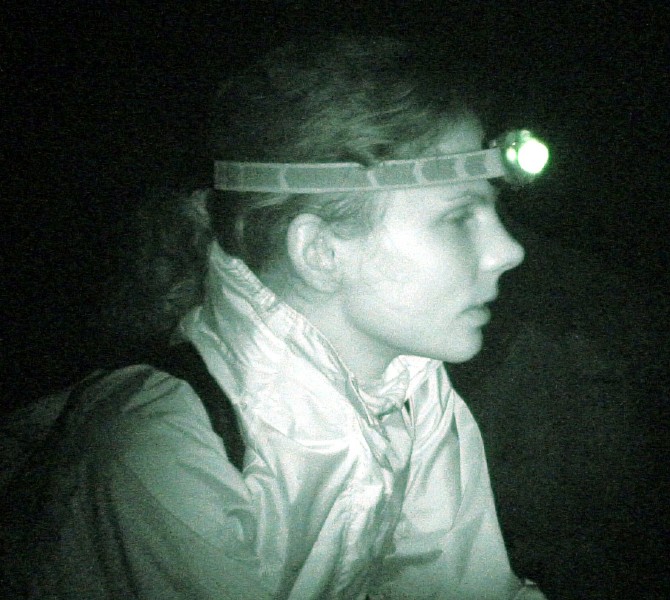 It was cool out but we started to sweat almost instantly because the road was quite steep. In a short time we ran out of houses and the road entered small farm plots. Shortly we reached a sharp bend in the road and a large cell phone tower. The next leg of the tiny, yet paved, road continued straight up the rise until it ended at a rest area and valley viewpoint. This spot was a little surreal because a large wooden sign was built above the rest area that read ‘New Selo’ but the large letters were an imitation of the ‘Hollywood’ sign in California. We rested for a while and ate cookies before starting up the trailhead to the left of the large letters.

The trail wound its way along a deep gully that cut thru more farm plots as it zigzagged up the slope to reach a forest of high trees and knee-high grass. We were making our way up this steep trough that was a bit slippery in the evening fog. It was obviously a small river when it rained and I was glad that the skies were beginning to clear.

The going was technically easy, but tiring none the less. The ‘trail’ was steep and required constant high steps from rock to rock or mud ledge to mud ledge. My thighs were burning constantly and I was soaked with sweat. At around 1:45 am we exited the winding forest/cultivated mix of land and reached the first plateau were we rested while the guide smoked another of his endless supply of cigarettes. This first plateau (as the guide called it) is really the start of a narrow ridge-line that winds steeply up the volcano. I noticed a small clearing to one side that showed signs of regular use as a campsite.

After our ‘smoke break’ we continued on up the steep mud packed and rocky trail. While still steep and deep, the trail slowly became more stone than mud and the surrounding vegetation more forest than sub-tropical. Around 3 am we reached the second plateau. Although it was too dark to see the cone of the volcano it was visible later on our descent and I realized then that the plateau was more or less the end of the ridge as it emerged above the tree line. From here the trail wound through some final shrubs to a sharp crest and then opened onto the a final plateau.

This flat expanse (called the third plateau by the guide) is a large flattish barren expanse at the foot of the cone’s steep gravel, scree, and bolder slope. We reached this open and windy spot around 4 am and considered our options. Cristina was tired, cold, and scared. The clouds had cleared enough to allow us to see a dark and foreboding cone in front of us that appeared shear and un-climbable. Our guide didn’t make the situation any easier since he kept hinting that it was ok to stay here at the foot of the 45-minute climb because he next section was the most dangerous. He then pointed out that the stone objects that we were sitting on were memorial markers for people who had died climbing to the summit. Patiently I informed Cristina that it was too cold to remain on the open and exposed plateau and that we needed to keep moving to stay warm. I also pointed out that we should make our way very slowly and carefully because we didn’t want to reach the summit too early. It was cold enough on this exposed area and that it would probably be even colder on the summit. Reluctantly she agreed to proceed at a cautious pace.

After a short walk we started the steep and rocky ascent. Fortunately our headlamps only showed us the ground around our feet and left the surrounding landscape in darkness. With this limited view of the area it was slow and precarious going. At many points the rocks were hot and the smell of sulfur permeated the air. A few times Cristina stopped to re-think her options. The eerie environment, the seeping gases and the fragile rock under foot visibly frightened her. With gentle coaxing and frequent stops we continued up the winding footpath until we reached a saddle in the volcano’s cone. It was now beginning to get light out and we could make out the outlines of the volcano’s center. The guide informed us that the last active and exposed lava had been sealed by a rock slide about a month before and that it was now safe to walk down and across the cone. Cristina looked at me as if he was crazy so I opted to continue along the crest for another 10 minutes to the flat summit of the volcano.

We reached the summit around 5 am and had fifteen minutes to spare before the sun rose above the horizon. The sky had cleared in our vicinity but clouds could be seen in the distance. We were soaked with sweat but happy and excited as we set about taking photos and filming. Yet in time a though started to sink in. I was on the summit of one of the world’s most active volcanoes and all around me I was starting to see plumes of sulfur smoke rising from fishers. The rocks were very warm in places and discolored by gasses and chemical residue. I was on top of an active volcano! Am I crazy?

Within an hour we finished taking photos, filming, and observing the scenic long views of the neighboring mountains, volcanoes and countryside. It was time to stop tempting the Fates. Our decent was in daylight and just as tiring as our ascent due to the steep nature of the trail, but we safely reached our starting point in the village of Selo at 10 am and celebrated our achievement with banana pancakes and Indonesian sweet tea as I considered our next target; Mount Bromo, another active volcano.

September 2010, this volcano erupted, killing 32 people while more than 40,000 others were forced to flee. This same volcano erupted last year, after we summitted, killing 25 people. It is considered very active for a volcano with its last major eruption in 1994 (when it killed 64 people).

Return to How to Summit Gunung Merapi Volcano post