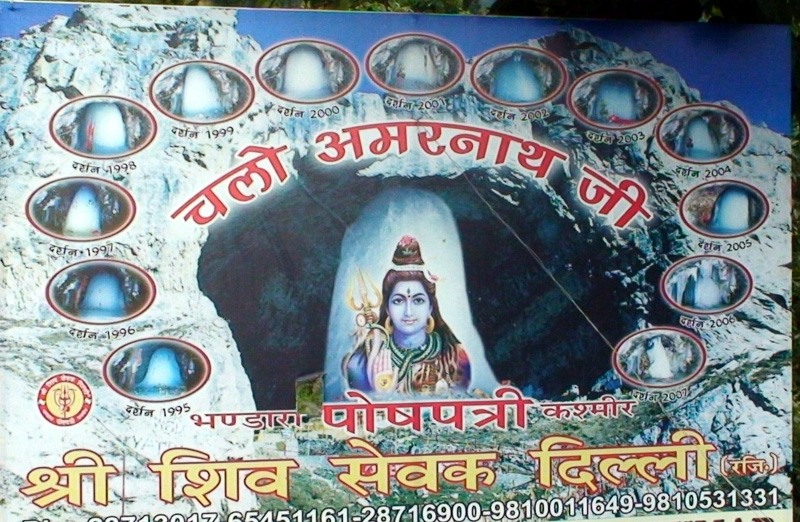 This is a post about how to do the Shri Amarnath Cave pilgrimage (Yatra), in  Kashmir, India. I provide details that include maps, costs, logistical requirements and facts as well as links to additional details, photos and videos. This is a self-guided adventure on a shoestring. Follow the links to dig deeper into the adventure.

Shiva is the Hindu living God, the god of destruction, and one of the holy trinity. The sacred and ancient Indian book, the Rig Veda, evokes his presence in its hymns. Vedic myths, rituals, and astronomy also testify to his existence. He is the great yogi and the guardian of the absolute.

The cave’s significance is two fold. Legend has it that Shiva told Parvati, his consort, the secret of reincarnation in the cave on a full moon night. Unknown to them, a pair of mating doves eavesdropped on the conversation and having learned the secret, are reborn again and again and have lived in the cave there after. Pilgrims come to observe the pair that still resides there to this day.

The second significant item in the cave is the symbol of Shiva, the source of creation, in the form of an ice lingam (AKA penis) that forms naturally each year. The ice lingam grows and then melts in a natural cycle each year that culminates during the annual month of Shravan (July-August). There are also two smaller ice lingams (one of Parvati and the other of his son, Ganesha). The cave itself symbolizes Parvati and the womb of the universe. It is estimated that from 100,00 to 250,000 pilgrims (yatree) visit the cave each year.

Legend states that there was once a Muslim Shepard named Buta Malik who was given a sack of coal by a Sadhu. Upon reaching home he discovered that the sack contained gold. Overjoyed the shepherd rushed back to thank the Sadhu, but on the spot of their meeting discovered a cave (now called Amarnath).

Another legend states that when Kashyap Reshi drained the Kashmir Valley of water, Brigu Reshi who was traveling the Himalayas discovered the cave and the lingam. 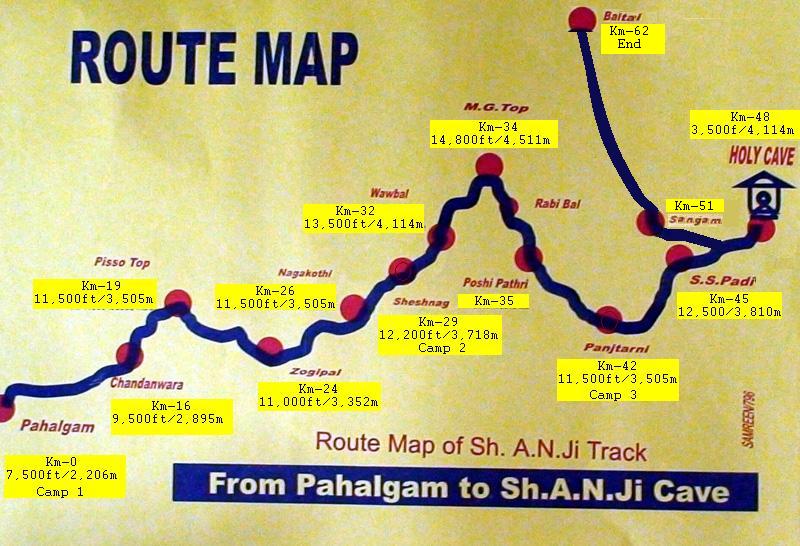 Pahalgam is the official starting town for the pilgrimage (yatra), even though you can now take a shared jeep an additional 16km to Chandanwara.

From Delhi to Pahalgam

From Srinagar to Pahalgam

Depart from Pahalgam or Baltal

Transportation from Srinigar to Lah, Ladakh.

From J&K State Bus Park, next to the J&K Tourist Office, or Tourist Taxi Stand, or Zero Bridge, there is a daily state bus (except Sundays) to Lah that takes two days for 620rs. The bus stops at Kargil for the night. You can sleep on the bus, pitch a tent, or stay at local Guest Houses for very little. The bus driver will compile a list of each person’s location for wakeup and departure the following morning at 4am. There are also shared jeeps from the Tourist Taxi Stand across the street from the state bus park. These only leave when full and at a cost of 1200rs per tourist (locals pay 900rs), but only take 12-14hrs.

Upon arriving at the Srinagar Tourist Taxi Stand or Bus Park I was attacked by hungry sharks pitching accommodation. The options are primarily houseboats on Dal Lake or rivers. There are also a limited number of Guest Houses. The houseboats start at 200rs a night while the Guest Houses start at 100rs a night.  I stayed one night on a boat and then moved into the empty Grand Paradise Guest House on the other side of the Zero Bridge (off the beaten path by about 10 minutes). Contact shagoobros@yahoo.com or 0091942500091 for details.

At the bus park you are naturally attacked by sharks, but in this case they are very polite sharks. The town is a favorite winter resort and they have figured out that rude and aggressive tactics turn off tourists. I met Bashir and his brother (a London transplant) who gave me the option of the expensive waterfront Himalaya House (600-1600rs night) or the Freedom Palace cottage on the hill overlooking the town at 150rs a night. I opted for the cottage. Contact email@himalayafunandtours.com or 91(0)9419045020 for details.

Tent accommodation is provide by independent vendors at Chandanwara, Sheshnag, Wawbal, and Panjtarni. The state regulated shared tent rates are 120rs for floor mattress or 150rs for a cot. There are also over 150 NGO’s that setup free food and accommodation for pilgrims for the two months that the pilgrimage takes place.  See the official web site listed above for details or contact Mr Satish Bhal at satishbahl@rediffmail.com, or info@amarnathyatra.org for details.

Lah is one of the few (and only one to date) places where sharks do not wait at the bus or taxi stands to pitch their accommodation options. The seven of us that arrived at 11pm on the shared jeep had to actually walk around the dark town waking up Guest House owners in order to find rooms for the night. All were full, but finally one owner called another one, who called another and then walked us to the Ree-yul Guest House (limbijal@rediffmail.com) which had two rooms we could share at 125rs a head. The next day I switched to a single for 100rs a night. This is a very friendly and easy-going Guest House.