Lost in Hanoi is a walkabout in Vietnam’s Hanoi to find the Ho Chi Minh tomb. This is the narrative of my trip to Hanoi. It includes a side trip to Halong Bay boat and a stop at a large cave complex.

Within an hour of landing at Hanoi International airport we found ourselves ensconced in a low-rent hotel (dump) within the city’s old quarter. Getting to the hotel was simply a matter of accepting a room offer (and free ride) from one of the hotel touts when we exited the bus in front of the Jetstar downtown office. 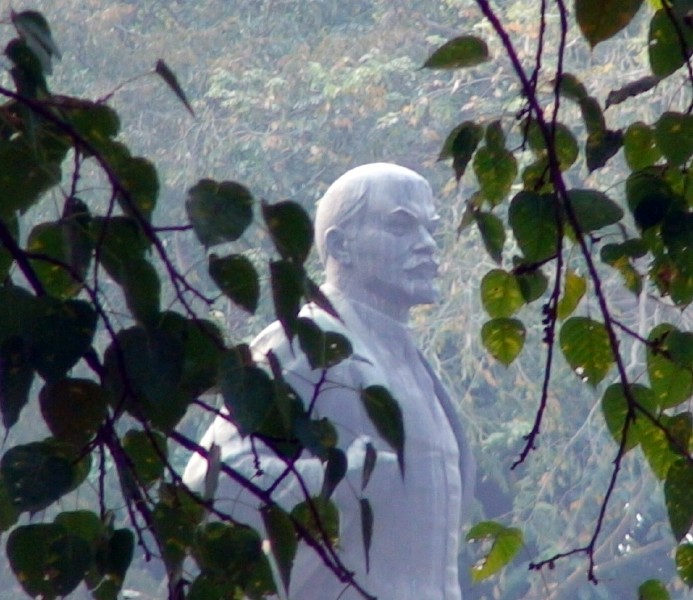 The tout called over a friend so Cristina and I jump onto the back of their scooters and zoomed off into the traffic. We were driven in and out of clusters of scooters and cars, zipped around the lake, and then were submerged into the bowls of the old quarter (think labyrinth).

The next day I headed out on foot to find Ho Chi Min’s (a KFC Colonel Sanders double) mausoleum. After a few false starts I made it out of the old quarter and into the wide colonial era streets bordered by majestic mansions and old growth trees. After asking directions from one of the many posted guards/police I managed to find the Presidential Palace (even wider streets) and then the massive final resting place of Ho.

I stood a respectable distance from the entrance (clearly marked by white lines and small ‘Do Not Cross’ signs) and took photos as the change of guards took place. It was just after 12pm and it seemed unusually quiet and subdued in the area. I wandered around to the side area where I met a fellow traveler (Viktor from Switzerland) who informed me that viewing hours were from 8am until 11am. I was late. No problem I thought. I could visit Uncle Ho’s museum as an alternative later in the afternoon and pop into the mausoleum the next day.

Viktor and I agreed to have lunch together while we waited for the museum to open. Viktor insisted that we try a local restaurant that the Book of Lies (Lonely Planet) recommended. I agreed reluctantly and followed him (and a Hanoi map that he graciously gave me) to the location. When we arrived we found the place full of westerners and the prices outrageous. We opted to find a cheaper local alternative.

While walking back up the street a little old lady came out of her open front restaurant, grabbed me, and ushered us to a low table. We sat and made hand signs for soup as food started arriving before we could even inquire about the prices. We refused everything but the soup. When it was time for us to leave we were informed that the price of the soup was 100,000 Dong (around $8). I laughed and we began to haggle with the old lady. Eventually I asked for help from a local customer. With the help we worked the old lady down to a still high 15,000 Dong ($1). The old lady was ruthlessly enterprising and had probably made a fortune during the Vietnam War era. This new communist Vietnam had clearly embraced capitalism.

We then headed back to the museum and spent an interesting hour examining the unusual and surreal contents after which I agreed to meet Viktor for dinner that evening. We said our goodbyes, and I headed off for my hotel. Finding the lake and the old quarter wasn’t a problem. The real problem started when I entered the old quarter. It was a maze of narrow streets that intersected at odd angles and bustled with street vendors and sidewalk food stalls. The issue was further complicated because I had neglected to take the hotel’s business card with me and didn’t remember its name. As a result I had to keep walking ever more confusing circuits while trying to identify the entrance way (lobby area being to noble for the place) and wondering how I would explain to the night police that I was lost, didn’t have my passport, nor knew the name of my hotel. I would certainly be a fit example of a stupid tourist.

Eventually I found the flower area so knew I was close. Then I found the stainless steel bathroom hanging roods area and knew I was even closer. After checking block by block I finally stumbled upon the hotel. I was exhausted as I ran up the stairs, found Cristina, and told her we had 25 minutes to get to the KFC in front of Turtle Lake to meet my new friend Viktor. It had taken me almost two hours to reach the hotel.

Out the door we dashed. Once again, finding the lake was easy. We found Viktor at the designated spot and then went hunting for another of his ‘Book of Lies’ recommendations. In this case the place was no longer in business.  Viktor accepted defeat nobly and agreed my alternative (a local place down an ally where he had to go into the kitchen to select the contents of his meal since they spoke no English).

When the meal was over we parted ways and began the hunt for the hotel again. Finding it was much easier with the help of Cristina, but still it wasn’t that strait forward and took us almost an hour.

The next day I set off early (with Cristina in tow) for uncle Ho’s mausoleum. Using Viktor’s map and Cristina’s over-riding directions we arrived with plenty of time to spare. After a respectful viewing we split up with different agendas. Mine was to take photos and videos of the lake and hers was to shop.

Around 4pm I left the lake area and entered the maze of the old quarter again. Surprisingly I spotted Cristina going in the opposite direction. When she saw me she was greatly relieved. She told me that she had been lost for the past hour and had even retraced her way back to the area of town where we had spit up earlier in the day. Yet she was still lost and had no idea where the hotel was. I took charge and after only a few wrong turns we managed to find (actually stumble onto) the hotel.

This crazy pattern of searching the old quarter for the hotel never ceased. We even got so lost once that we entirely missed the lake and ended up in a different part of the city. It simply defied logic that we could not find our way around the old quarter (even when I started carrying a small compass with me).
At one point Cristina commented in frustration that the real adventure in Hanoi was simply finding our hotel. At the time I had laughed, but after so many days of repeatedly losing it in the black hole of the old quarter, I had to agree.

Before heading off to Sapa (and to climb Fanxipan) we opted to visit Halong Bay for a day. The purpose of the trip was simply to get an idea of the area and what it offered. Naturally the bus ride there was over-full, and the tour was a typical package; as we were herded on and off the bus to buy trinkets, on and off the boat to visit sights, and then off the boat and onto the bus for the long drive back to Hanoi.
Coincidentally we had booked train tickets on that evening’s night train so our schedule was tight. Rather than test my luck with another lost journey in the old quarter, I asked the bus to drop us at the hotel.

Who said I always push my luck?