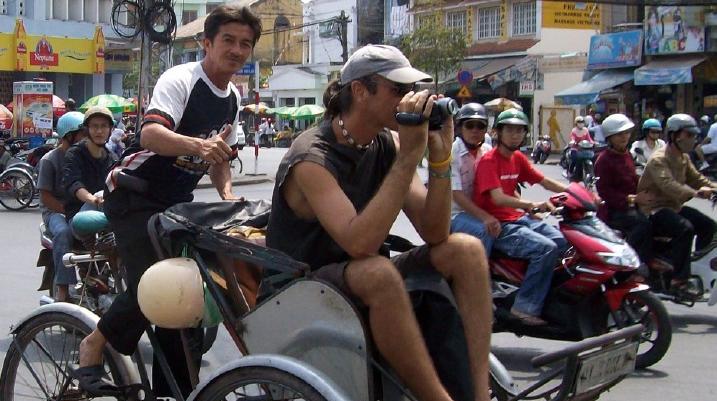 This is a how to see Saigon by Rickshaw blog post. I will provide details that include maps, costs, logistical requirements and facts as well as links to a full written narrative, photos and videos. This is a self-guided adventure on a shoestring. Follow the links to dig deeper into the activity.

We agreed on a route that would include the Chinese quarter, two temples, the US Embassy (the historical site of helicopters evacuating the last Americans from Vietnam as Saigon fell), and a few other locations. Cost $10 each. 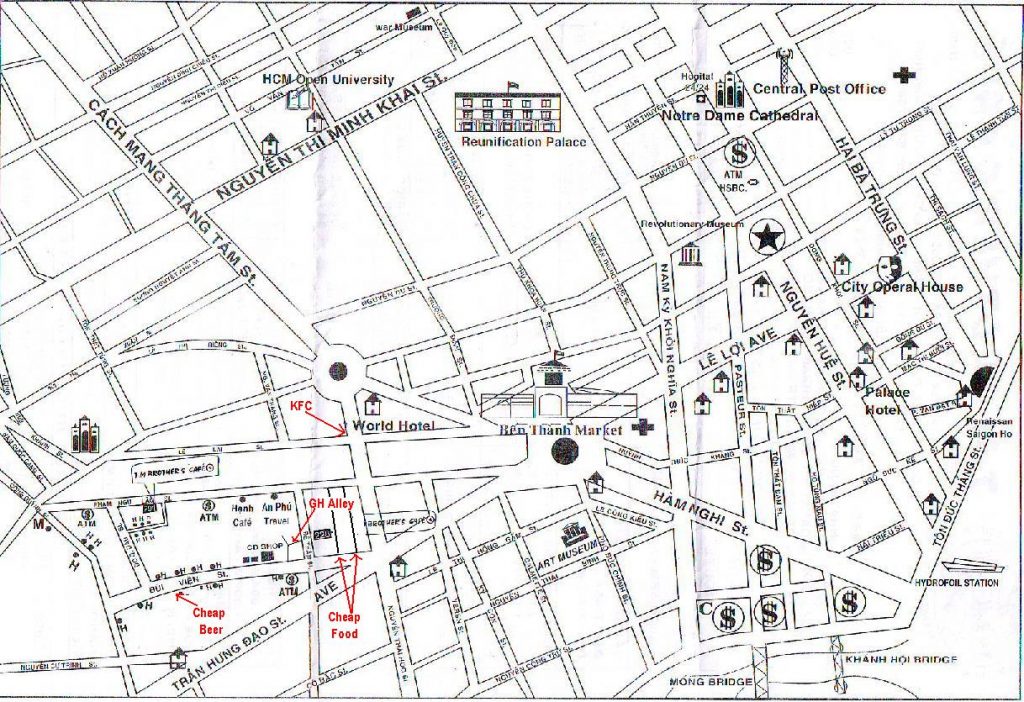 The bus from Cambodia dropped me in front of the TM Brother’s agency on De Tham St, Saigon (Ho Chi Min City). I started by checking the prices at the places listed in the Book of Lies (Lonely Planet). Everything listed was priced at $20 double and was full (even though the book said they started at $7) A friendly old lady that claimed to be working for the Government Tourist Agency showed us around for a while, then confided that there were no more places under $10, but that she could show us a private un-listed place for $10. We followed her across the street from TM Brothers and into a small alley lined with guesthouses. She took us to Nhung. We checked into the $10 double room but then found out it was $13 if we wanted to use the a/c. That afternoon we found out why they wanted extra for the a/c. It was very hot and the top floor, where our room was located, was the hottest.

The next morning I asked them to reconsider the extra-charge for the a/c. They refused so I went out and asked around for another place to stay. I found out that the going price is $5 per foreigner or up. I knew that Vietnam has a two-tier pricing structure for tourists (trains cost 300% more for tourists as an example) so had to settle with a minimum of $10 per double. I checked into the Ly (Lee) down the alley since the room was about the same as the Nhung, but on the 3rd floor rather than the top and would be much cooler by comparison.

Basically, check out any place in an alley. If it is on a main road it is over-priced.

I visited a number of agencies (there are more than enough), but settled on the TM Brother’s Cafe agency for a $7 temple & and tunnel trip. The first day we showed up for the departure they told us the temple was closed for repairs and that we could get a $5 refund and join the tunnel half-day trip. I refused so they said they would stop at a temple on the return for me to take a few photos if I wanted. I agreed so sat around waiting for the pickup. When it (a van) arrived I refused because it was full. I said I would switch to the next day. They agreed.

The following day I waited again, but this time the temple was open so it would be a full day trip. This time the pickup service was a mini-bus. We got on and then it continued to drive around picking up people until it was full. We then started a long day of driving. Ultimately it was a good tour and at a cheap price. Just be careful about seating options. I found out later, thru experience, that every ride was packed to over-capacity. It is simply the Vietnamese way.

TM Cafe (tmbrothers_saigon@yahoo.com) offers many bus options for traveling around and across Vietnam (as do many of the other agencies). The most popular seems to be the open bus ticket which lets you jump off and on at different cities. Rather than find out how this worked I decided to ask around about a flight to Hanoi. I found that both Indochina Airlines and Jetstar Airlines offer very cheap Vietnam services. So for $60 per person it was cheaper to fly to Hanoi from Saigon (Ho Chi Min City) than take buses and at least 7 days. I opted for a flight since I was also on a short schedule.

Jetstar Airlines $60 flights to Hanoi and has English web site. Plus cheap flights to other countries including Australia.