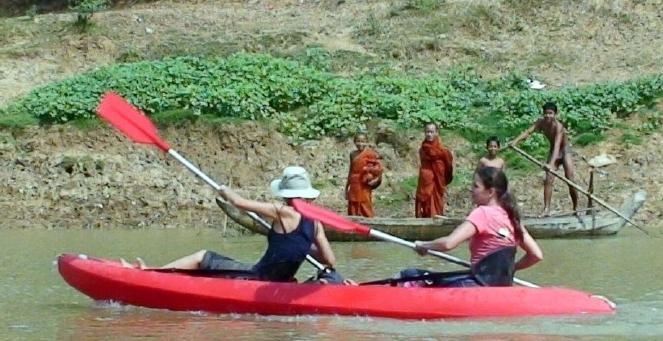 This is a quick overview of how to kayak in Cambodia. Specifically on the Sangkar River, near Battambang. I provide logistical requirements and facts as well as links to videos. This is a self-guided experience on a shoestring. Follow the links to dig deeper into the article. To get to/from Battambang see Riverboat Ride post.

Green Orange Cafe in Ksach Poy, 8Km south of Battambang on the road towards Wat Banan (west side of the river).
Phone : 085 506910
www.fedacambodia.org
eddie2spaghetti@yahoo.co.uk 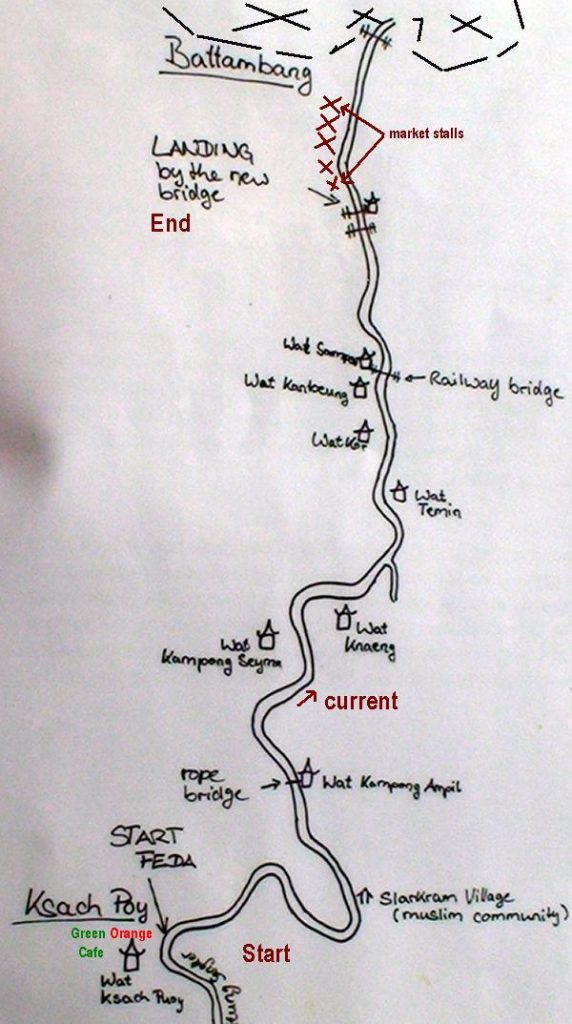 Not much happens in Battambang nor is there much to do, so after a few days of Internet surfing at Brett’s Bus Stop Bar (50 cent beer) we booked the slow bus to Phnom Penh. That evening we returned to the Bus Stop for our final outstanding meal and cheap beer. Looking at the notice board I noticed a new flyer. I read with surprise that a half-day kayak trip was available. It was new and Brett knew nothing about it. I asked if he could change our bus tickets and he agreed. I then called the number on the flyer and spoke to Eddie, who informed me that we were the first customers to enquire. He and Maren (his wife) had purchased the kayaks in Thailand and then drove them cross-country to Battambang. They had raised the money for the venture back in England and were helping a local NGO start up a sustainable tourist kayaking business. We agreed to meet the next day and to be their first paying customers.

The next morning I ran into Manuela, a German girl staying at our same guesthouse and convinced her to join me and Cristina on the kayak trip. We then had a bit of trouble finding a tuk-tuk driver who knew where the Green Orange Café, in Ksach Poy was, even though they all nodded and said ‘yes’ a lot. We jumped into the tuk-tuk and rode over to Brett’s to ask his help. After the tuk-tuk driver spoke to both Brett and Eddie (by phone) I still wasn’t convinced that he knew where we were going. In the end we agreed on a price of a few dollars and off we went down a dusty road that turned into a very dusty dirt road. About 12km south of town we spotted Eddie and the (closed) Green Orange Café.

We greeted each other and paid off the driver. Eddie then took the driver’s phone number and name so that he could refer future customers to him (since he was now the first tuk-tuk driver who actually knew the location of the café). We all then went into the FEDA NGO facility to go over the trip’s route and learn a little bit about the project.

By the time we were ready it was almost 1 pm and very hot. We then watched as Eddie and Maren man-handled the kayaks across the dirt road, through a dry field, under a barbed-wire fence, and then down a mud slope to the river. At this stage we were cooking in the sun as they went over the basics of a ‘sit-on-top’ kayak. We then splashed into the muddy river and floated away as they waved farewell. 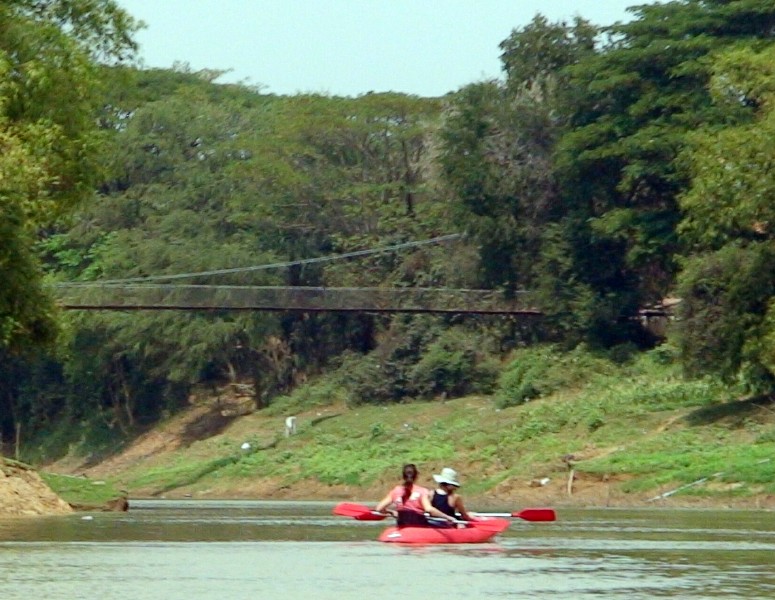 They had told us that the trip down the river would take 3-4 hours depending on our desire to paddle. We were going downstream but the wind blew gently upstream so our pace when not paddling was very-very slow. Unfortunately Manuela and Cristina didn’t hesitate to paddle and seemed impatient with my many requests to stop and film. So with Manuela and Cristina generally far ahead of me, I filmed the locals along the river (who all stopped to wave and shout ‘hello’) until I called a halt at a walking bridge that used to be a railway bridge.

At this stage the banks were very steep so pulling the kayaks out of the water was futile (they simply slid back down the slope into the river), especially since this maiden voyage didn’t include any ropes on the kayaks. In the end Manuela volunteered to hold the kayaks at the river and cook while Cristina and I walked to the top of the slope to visit a local market of three stalls. They sold nothing cold, but did have some blocks of ice in a cooler. I watched as a girl took out a block and shaved slivers off and into a glass. She then poured in some brownish water and handed it to a paying local. Cristina and I looked at each other and decided, without words, that we would find drinks elsewhere, even though I was parched. Naturally I had not had breakfast, nor had I brought any drinks with me, on the assumption that the Orange Green Café would be open. The girls did have some water bottles, but I was determined to suffer until I found a Pepsi (and suffer I did).

We returned to the kayaks and continued to bake in the hot sun. The slight breeze had little effect and none of us felt brave enough to swim in the river like the locals. Our choice was confirmed as we passed a dead and bloated dog in some reeds. Now I understood why the local FEDA NGO included water hygiene as part of their curriculum.

Eventually I spotted a young boy sitting on the shore below some stalls perched high up on the left bank. I decided to ask for his cooperation in getting something to drink and handed him some money mimicking drinking motions. He then ran off happily and I wondered how the exchange would work out. In time I spotted the boy returning with two cans of soda (not Pepsi but better than nothing). I took the cans and then gave him some of the change. His eyes widened in delight and he bowed with his hands pressed together in gratitude, and then ran off hooting. I got the feeling that I had just produced a new businessman with a 15 cent stake. I hoped that Eddie’s kayak venture would expand quickly beyond our initial trip so this new capitalist might survive.

I sucked back the first can in a few gulps and felt the sugar (and liquid) rejuvenate me. I then set out to catch up with the girls. I found them downstream in the middle of some local boys and child monks that were swimming and jumping from canoes. We snapped pictures to the delight of the boys and then continued to paddle and float away the afternoon.

Clearly they were enjoying the rich green slopes, the throngs of smiling and waving children, the varied villages along the shore (especially the sight of a Muslim enclave and call to prayer echoing from the hills), the fishermen at work on their nets, the women washing their clothes (and themselves) along the shore, and the overall serenity of the river and life lived along its banks. Now that I had upped my sugar content I felt some relief from the sun and settled back to follow their lead.

Around 4 pm we reached the bridge that was our exit point. We waded onto the muddy shore and hauled the kayaks out as swarms of children ran up to us. They climbed all over us and the kayaks. It was like trying to chase away mosquitoes. They had relentless energy and time on their hands. We were the day’s entertainment so gave up battle and let them play on the kayaks. The girls sat and watched them play, defecate, and swim while I walked up to the road in search of Eddie.

I wandered around for a while and then visited the market down the road and, to my delight, found Pepsi. I stocked up and returned to the girls.  It was still very hot and I could tell the girls were getting very tired of the waiting so I sent them on their way while I waited.
In time Eddie showed up with a pick-up truck. We loaded the kayaks and they offered me a ride back into town.

By 5pm I was back in the Bus Stop Bar eating another of Brett’s killer meals and drinking cheap beer. The day had been hot, the kayak trip had seemed long at times, yet for a short time a window had opened on the secret life of the river and its people. After a beer I began to feel the traveler’s urge to move on, and perhaps it was time to get out of one-horse Battambang on the river kayak high note.