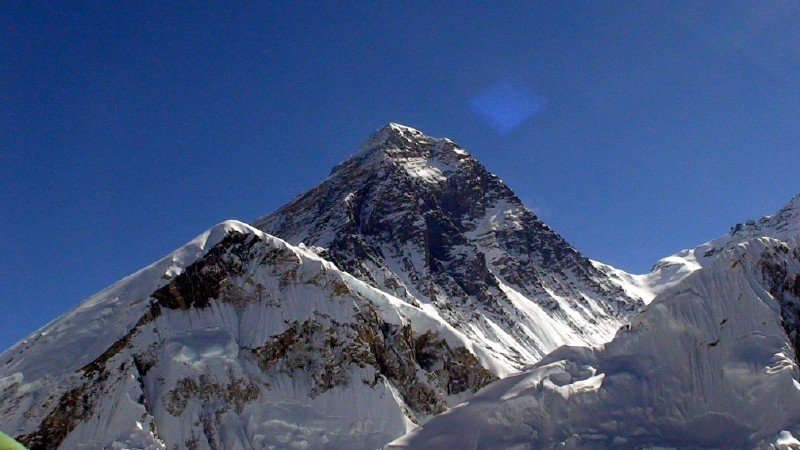 This is a narrative that explains how to do the Nepal Everest Base Camp trek via Jiri independently. I provide details that include maps, costs, logistical requirements and videos. This is a self-guided adventure on a shoestring. Follow the links to dig deeper into the adventure.

Everyone knows that Mt Everest (named by the British in 1856, for Sir George Everest, the ex-Surveyor General of India) is the highest mountain in the world so I feel no need to dwell on my reasons for trekking to see her first hand. Actually, you can’t see Everest from the official Base Camp, but it is definitely as close as you can get before your life goes from really difficult to absolute hell, but let me back-peddle to fill in the blanks at this point.

Naturally I picked Everest as my first trek, but with a twist. In the days of old there was no airport at Lukla so Mr. Hillary and friends had to trek all their gear an additional 10 days from the town of Jiri (where the road still ends today). Like the old boys I decided to start my trek from Jiri (a bumpy 12hr, 188 km bus trip from Kathmandu that would take about 2hrs in the western world) and would also forgo the use of a porter, guide or fortuneteller (real men carry their own gear don’t they?).

This extra leg would add approximately 10 days of hot, lush and tropical valleys to my itinerary. Just to be sure it wouldn’t be too easy, I was also carrying with me a cold virus. I’d been coughing continuously for the four days prior to my start. Perhaps some hard walking in the sun would do what the pharmacy cough syrup couldn’t I rationalized.

Finding the correct bus in the dark of 5 am among hundreds of junk heaps, called buses at Kathmandu’s ‘old bus park’ was a challenge (especially since my ticket was written in Nepal, which didn’t look anything like my destination or the occasional marks in the bus windows. I resorted to stumbling around in the mud asking every single person ‘bus to Jiri’. Give them credit because every person I asked stopped what they were doing (usually searching desperately for their bus) and pointed me in a generally random direction.

Total Cost Range of this Activity is: $$$

As the sun began to rise I found the correct bus. The driver then tossed my backpack on the roof (occupied by an unruly mob) and then just as gently tossed me into the last seat in the last row. The driver then spent at least an hour honking his horn (as did all the other drivers) in order to free his bus from the mad congested clot of over a hundred randomly facing buses, all trying to break out of a single exit into busy cross-traffic. Once out on the main road the stop, start, kidney-busting bus ride began in earnest. We left Kathmandu (altitude 1,310 m) at dawn and pulled into the one street town of Jiri (2,100 m) at dusk with few remaining passengers (but all with hearing damage from listening to the driver’s favorite Indian cassette played at full volume all day long).

Before the bus came to a full stop three fellows trying to sell me the services of their respective Guest Houses befriended me. I went with door number one (as per the recommendation of my Kathmandu acquired guide book, Trekking in Nepal).

The facilities were primitive but in hindsight were quite luxurious. Soon I would learn that the quality of lodging and food would continue to decrease, as their respective prices increase the further out I went. It actually makes sense since everything has to be manually carried in beyond Jiri (or Lukla after paying expensive flight charges). Let’s just say that I got used to paying more, eating less, being colder, and getting smellier (even though paying more really amounted to paying as much as 800 rs for a place to sleep, dinner and breakfast, or about $11 at the high end).

After a good night’s sleep, I set out from the end of town (the end of the single road) to cross the valley, that consisted of hills, scattered villages (one to five simple homes), pasture fields, terraced plots, and scattered sub-tropical forests. I crossed my first low pass (Ratmate Danta Pass, 2,360 m) early in the day and felt strong enough to continue beyond the first day’s objective of Shivalya (1,800 m) and continue on to the Deorali Pass (2,705 m) and then beyond to the town of Bhandar (2,200 m). I was determined to keep this tough pace while fresh and still strong.

Although pretty, the valleys and passes that I crossed over the next ten days became very repetitive and tiring. The temperature was consistently over 30 degrees Celsius (86 Fahrenheit) and sunny (Nepal is at the same longitude as Miami Florida), so my days were sweating hot and tiring. The next day’s objective was Dagchu (3,000 m), after being stopped by a Maoist, who tried to extort 2,500 rs as a People’s Tax, outside Kenja. The following day I slept in Phurtyang Beni (2,900 m), after clearing the Lamjura Pass (3,530 m).

The day after I stopped at Nuchula (2,280 m) after slogging over Tragsindo la Pass (3,071 m), followed by a night at Poiyan (2,800 m) this time after Khari la Pass (3,081 m), then a semi-comfortable night at Phakding (2,400 m) after the Chutok la Pass (2,945 m), and then finally the shopping town of Namche Bazaar (3,440 m), the modern beginning of the trek. What all this amounted to was eight very long days of dragging my sorry butt and gear across eight valleys (four agricultural and four sub-tropical rain forests) and seven high passes (with altitudes ranging between 2,360 – 3,530 m). All this humping just to reach the beginning of the Everest Base Camp trek for ‘normal’ people who flew in and out of Lukla (located four hours walk from Namche Bazaar). I sure was glad that I’m educated and know how to pick my routes; not.

So now on day nine, with my cold winning the body war, I purchased a knockoff cough syrup called ‘nokoff’ and started the next ten-day stretch of slogging my gear, but this time at significantly higher altitudes (3,480 –5,545 m). Surprisingly, when I mentioned to fellow trekkers or lodge owners that I’d walked in from Jiri, they all replied that at least I was well acclimatized to the altitude. Perhaps; but I was also exhausted and sick as a proverbial dog, while the ‘newbies’ getting off the flights all looked clean and fit. Sure they had to sit around the lodge for a day or two to acclimatize, but that didn’t look so tiring to me.

On my way back to Lukla from EBC I did a side trip to summit Island Peak.

After my summit attempt I returned to Lukla.

I reached Lukla in a mild rain shower, at dusk, on my twenty-first day of trekking. I checked into a modest Guest House, ordered as much food as my shrunken stomach could handle (keeping the kitchen staff happy and busy for over an hour), asked for an extra blanket, and slept one more cold shivering night before catching a flight back to ‘civilization’ called Kathmandu the next day.

Now I am comfortably settled into a cheap Thamel Guesthouse, surrounded by noise, music, cheap and plentiful restaurants, and planning my next adventure; the Annapurna Circuit, but this time I am considering buying a winter coat and may also hiring a porter to carry my gear, (maybe).

Everest Base Camp was an adventure filled with long tiring days, cold nights, and incredible sights. I’d reached Everest Base Camp in blazing sunlight and viewed the mother of all mountains from the vantage of Kala Pattar the following morning. The trek was long, gratifying and it hurt so good.