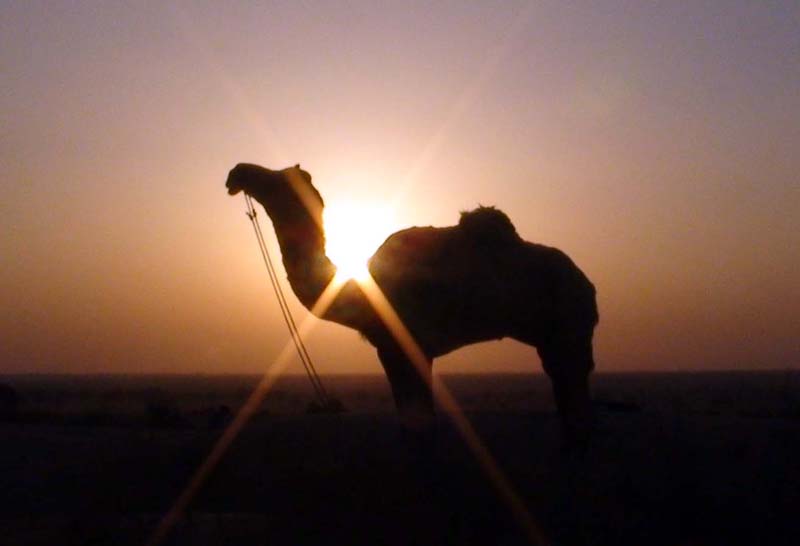 In this post I explain how to do a traditional camel safari in Rajasthan, India. I provide details that include maps, costs, logistical requirements and facts as well as links to additional details, photos and videos. This is a self-guided adventure on a shoestring. Follow the links to dig deeper into the adventure.

This little adventure happened quite suddenly and without much planning so let me simply recite the events as they unfolded. Cristina and I sat sweltering at a rooftop restaurant in Delhi in early March when we met a French couple who were on their last day in India.

We struck up the usual conversation that deals with length of travel and destinations. During the conversation they mentioned that they had visited a wonderful desert town called Jodhpur, in Rajasthan. Cristina knew that I had hoped to do a camel safari the previous year but had been dissuaded by the heat in April.

After the couple had left we discussed the possibility of visiting Jodhpur (the Blue City) and decided that the longer we sat around Delhi the hotter it would get in Rajasthan so we had better get moving. That evening we visited the New Delhi train station tourist ticket office and purchased a set of 2nd class sleeper tickets for the following evening.

Like all train rides in India, the night train to Jodhpur was an adventure in spirit, endurance, perspiration, and assertiveness. We reached Jodhpur at 6 am without a local map or the name of a Guest House. I searched and found a small group of Westerners waiting for a morning train and asked them for lodging details, Tuk-Tuk costs, etc. By 7 am, based on the information I had gleaned, we were comfortably ensconced in the Gopal Guest House. After a short nap I quizzed the owner who informed me that camel safaris were available a short 300 km to the west of Jodhpur. Cristina laughed at our obvious lack of accuracy and agreed to spend a few days in the area being tourists before setting out for a town closer to the desert.

Two days later we boarded a comfortable local bus (comfortable by Nepal standards) and perspired our way west towards the fort village of Jaisalmer (the Golden City). This time we did have per-determined accommodation. Cristina refused to travel without details after observing my Jodhpur approach to logistics, so we had the owner of the guest house in Jodhpur call his friend in Jaisalmer, who managed the Hotel Temple View (within the fortress). Fortunately he sent a Tuk-Tuk to pick us up at the bus station so that we could ignore the bustle and sales pitches by the locals in wait.

We checked into the Temple View and agreed to two nights and then enquired about camel safaris. It turned out that the manager also ran a local travel agency that specialized in camel safaris (naturally). Fortunately it was the end of the season so we were his only customers. We agreed on a three-day and two-night package for 650 Rs ($10) per day, per person.

Two days later we were picked up outside the fort by a jeep loaded with vegetables and bottles of water (lots of bottles of water). Although it was late March, it was already extremely hot with temperatures approaching 40 Celsius in the early afternoons. The jeep took the road west to Sam Dunes village and then south to a two-house village called Masurdi, where it turned off the road and wound its way across rocky semi-cultivated or grazing land. After picking up a few locals (for directions) we spotted three camels on the horizon. We unloaded the locals and then headed for the camels where Phusaram Pungararam, our camel driver, cook, and guide met us. A young man, Tetokaram was the laborer assigned as the assistant.

They loaded the supplies on the patient and smelly camels and then showed us how to mount and sit on a camel. Once these formalities were addressed they coaxed the camels to rise and start a bumpy, bouncy, waddling shuffle across the dusty semi-cultivated plains. The land was arid with very little vegetation so I asked about the dirt furrows we were passing. Phusaram stated that the entire area would turn green with crops as soon as the first monsoons arrived in May or June. It was hard to believe that the area would ever turn green, especially in that dusty dry per-monsoon season.

We stopped around 11 am at a man-made cistern on top of a rock ridge so that water jugs could be filled. This water would be used for cooking and the guide and assistant’s drinking purposes. Cristina and I would stick to bottled water, thank you.

After topping up we continued towards some distant sand dunes and mixed spiny trees. We used one of these trees for shelter as Phusaram and Tetokaram prepared our lunch of fried snacks and fresh vegetables cooked to the point of blandness. We then spent the balance of the hot afternoon napping in the shade while the camels grazed on tree leaves or wrestled with each other (biting, butting, farting, and being bothersome).

Around 3 pm we were rousted as the camels were chased down and re-packed. We then spent the next two hours crossing dry savanna and sand dunes until we reached the village of Rami. Here we found that the village water supply was broken so the camels could not be watered. This didn’t seem to bother Phusaram as we set of at a fast pace until we reached the golden Saham sand dune, our destination for the evening.

We sat and watched the sunset while dinner was prepared. We ate our meal quickly and then retired to our isolated dune to observe the stars and rising moon. We were informed that it doesn’t rain until monsoon season so tents are not provided. We were sleeping out under the stars. It became apparent very quickly that sleeping out on sand dunes tends to be very sandy as the winds blow sand pretty much continuously.

Naturally, facilitating Cristina’s night washing rituals in the dark on a sand dune became quite a challenge and seemed pointless to me. However, she assured me that washing her face with a number of soaps and creams was essential before applying her moisturizing regiment. I dutifully poured water and held the towel and flash light as instructed. We then lay down on the sandy blankets only to be woken up periodically by Cristina shrieking due to large black sand beetles that seemed to find their way into her hair or the blankets.

We woke late the next morning to the sound of farting camels and the crackle of the breakfast fire. We ate fresh chapatti bread with jam, drank tea and then set out on the more remote leg of the journey. We turned towards the southwest and stopped at the village of Raydham ki Dhami to water the camels.

We then went to the wells outside the village to watch flocks of sheep being watered and woman fetching water in jugs that they carried on their heads. After an hour of this varied entertainment we set out across dry fields, and then dry pastures. We past the dusty villages of Jamda and Guria before finding a lone tree on the edge of a dune area where we settled down for the routine bland lunch and long nap cycle as the temperatures soared.

Around 3pm we repacked the camels and set out at a fast pace for the abandoned Khabha fort and village. After a little exploring we moved out to a small dune near the fort and setup our night camp as the sun set. We went through the same washing ritual after a bland dinner and then quickly fell asleep. This time Cristina didn’t seem too bothered by the black sand beetles.

Click to watch Part 2 Video
I woke early the next morning to film the sunrise and then ate chapatti, drank tea, and saddle up for a return to the abandoned village. We explored for an hour before setting out to the northeast at a run. By early afternoon we reached Jasiri Oasis, a natural lake that generally doesn’t dry out though the year. Here we settled down under shade trees while numerous flocks of livestock watered, local woman filled jugs, and birds waded.

By 3 pm Cristina and I were tired of watching the camels wrestling, while we sweltered (and tired of avoid droppings from the crows that liked to settle in the branches above our blanket). At that stage we were ready for the last leg of our journey to begin so that we could get back to cooler Jaisalmer and cold showers.

The final leg took us through irrigated fields and back to the road leading to Sam Dune village. The jeep met us on the road around 5 pm and by 6 pm we were back in the comfortable Temple View Hotel enjoying cold Pepsi. We heartily agreed that the three-day and two-night trip was of sufficient duration and any longer would have been too hot to endure and we now understood why we were the only customers for a camel safari at that time of year. 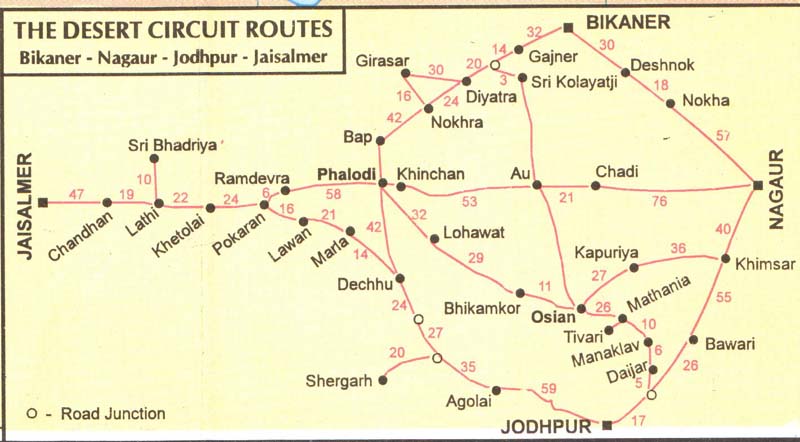 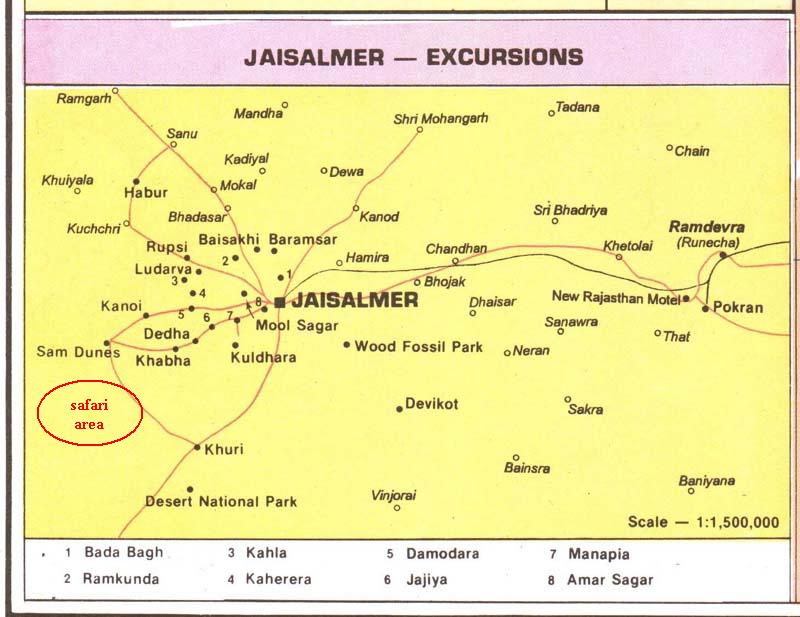 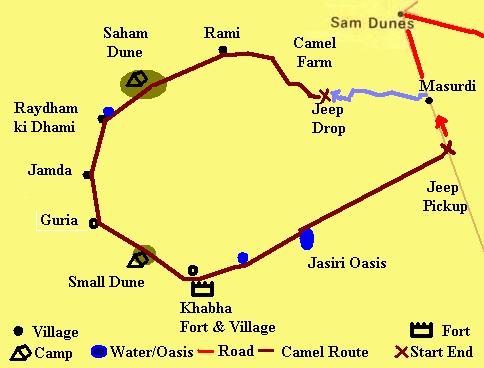 Excursions begin from the town of Jaisalmer. I used the following agency to setup the camel trip.

I visited Jaisalmer by taking a train from Delhi RR Station to Jodhpur, then a bus to Jaisamer. For the return I took a bus to Pushkar, then another bus to Jaipur, then a train to Agra, before catching another train to Gorahpur in order to reach Sunali and the Nepal boarder. I spent a few nights in Jodhur, Jaisalmer, Pushkar, Jaipur, and Agra through out this trip.

Hotel Temple View
Next to Jain Temple, In the fort
jaisalmertempleview@hotmail.com, 02992.252832