A Short History of Nepal

Nepal and the Nepalis

This is a short history of Nepal derived from a few interesting sources. For those visiting Nepal for the first time or simply to trek this should be enough to prevent you from looking like a complete western fool;-) 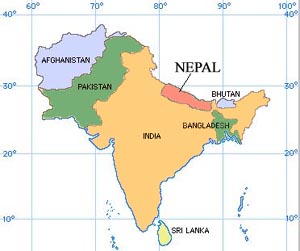 In the Himalayan highlands of Nepal live Mongoloid peoples speaking Tibetan and other Tibeto-Burman languages, like the Sherpas. In the valleys of the lower Himalayas (like the Kathmandu & Pokhara valleys) reside various Indo-Aryan and Tibeto-Burman speaking peoples. South of the forest/jungle areas of the inner Terai, in the fertile flatlands of the Terai on the north edge of the Gangetic plain, there live a large percentage of Nepal’s population – mainly Indo-Aryan speaking people. These flatlands are the most agriculturally productive part of Nepal and thus is one of the most economically important regions.

Note the red arrow. It shows the Rara Lake trek I did.

The earliest known history of Nepal begins with the Kiratis, who seem to have arrived in Nepal from the east in the 8th or 7th century BC. They are said to have favored long knives (which may be an ancestor of the khukuri). Later Buddhism spread into Nepal from India during the Kirati era, but by 200 AD Hinduism had largely supplanted Buddhism. Hinduism was introduced into the kingdom when the Licchavis, from northern India, invaded and overthrew the Kirati ruler. By the late 9th-c. the Licchavi dynasty had died out and had been replaced by that of the Thakuri. Later, from the 14th-18th centuries, a Newari royal family, the Mallas, ruled the Kathmandu Valley.

Then, in the 18th-century, the ruler of Gorkha (in central Nepal, about 100km west of Kathmandu), King Prithvi Narayan Shah, conquered various warring principalities (most importantly in the Kathmandu Valley) and formed a united Nepal, founding the modern state of Nepal. Prithvi Narayan died in 1775 and was succeeded by his son Bahadur Shah, who continued to pursue a policy of expansion. By 1810 Nepal was twice its present size and its encroachment on the terrority of British India lead to the first and only Anglo-Nepali war during 1814-1816.

Factionalism and intercine fighting amongst Prithvi Narayan’s descendents lead to the Kot Massacre in 1846, during which General Jung Bahadur Rana seized power of the government and had himself proclaimed Prime Minister for life as well as assuming the title Maharajah. The rightful royal family of Nepal, the Shahs, were reduced to virtual figureheads and cyphers. Relations with British India were improved when Jung Bahadur assisted in quelling the Sepoy Rebellion (Indian Mutiny) of 1857 with Gurkha troops.

In the late 1990s, a Maoist guerilla movement began rebelling against the government. Maoist attacks have claimed over 1700 lives thus far in Nepal, and disrupted the economy, partially through their dacoit style tactics. 2001 saw a royal massacre of many of the members of the royal family, including King Birendra Shah, by Crown Prince Dipendra. The late king’s brother, Gyanendra ascended to the throne and quickly restored stability.

The Founder of Modern Nepal

The founder of the modern state of Nepal, His Majesty King Prithvi Narayan Shah, described Nepal over two centuries ago as ‘a flower garden of four castes and thirty-six tribes’ (Yadava & Glover p. iii); — and to this description one may add ‘120 languages’. Bahuns (Brahmins) rank highest in the traditional caste hierarchy, along with Chhetris (Kshatriyas) they formed a majority of the influential and wealthy people of Nepal and are the most widely dispersed throughout the country. More than half of all Bahuns & Chhetris live in the western hills, where they are about 80% of the area’s total population. Their mother tongue, Nepali, an Indo-Aryan language, has become the state language of Nepal. Nepali (also called Gorkhali, Parbatiya, Khaskura) is also the mother tongue of a small number of occupational castes, such as the Damai (tailors), Sarki (cobblers), Kami (blacksmiths) and Sunar (goldsmith) castes (see Bista). About 58% of the population of Nepal speaks Nepali as their mother tongue. Other prominent Indo-Aryan languages of Nepal include Awadhi (2%), Bhojpuri (7.5%), Maithili (11.9%) and Tharu (5.3%). The majority of the other languages of Nepal are Tibeto-Burman languages, including Gurung (1.23%), Limbu (1.37%), Newari (3.73%) and Tamang (3.26%).

Many of the Gurkha troops are and were recruited from the (Mongoloid) hill tribes of Gurung, Magar, Limbu and Rai.